Wig Out! at The REP 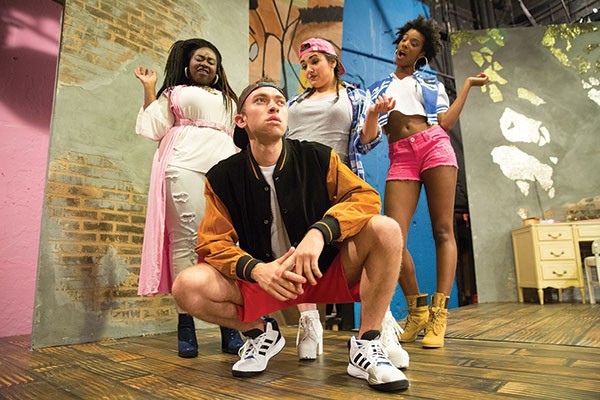 Photo courtesy of John Altdorfer
From left: Arica Jackson, Krista Antonacci, Amber Jones and Jordan Bolden in Wig Out!, at The REP.

Tarrell A. McCraney’s 2008 play Wig Out! looks at the African-American
ball community — a near-indescribable mix of transgender, cisgender, gay, bi, straight, queer and every other stop on the gender and sexuality continuums. The only thing ball members have in common is (sometimes brutal) rejection from the “real” world. So they create families, called houses, for love and support. Occasionally these houses face off in balls where members “walk” for recognition.

McCraney’s somewhat slender plot centers on the House of Light which, like any family, overflows with dysfunction. When the rival House of Diabolique challenges it to a ball, all the buried feelings erupt.

Tomé Cousin, who directs this production for The REP, takes this script and detonates it. Using music, light, dance, technology and just plain great talent, he creates an evening of theater that is, quite simply, unlike anything I have ever seen on a Pittsburgh stage. I could go on about the genius work that he and his extraordinary creative team (Jane Howell, Britton Mauk, Robert C.T. Steele, Steve Shapiro and Andrew Ostrowski) have done. But that wouldn’t leave me room to mention this scorching cast and their mind-bending work: Jerreme Rodriquez, Jordan Phillips, Freddy Miyares, LaTrea Rembert, Krista Antonacci, Arica Jackson, Amber Jones, Connor McCanlus, Jared Smith and, especially, Justin Lonesome and Jordon Bolden … each and every one is glorious.

But don’t take my word for it. I’ve been doing some trans-advocacy work lately, and asked two cohorts, trans women of color who head local support groups, to see the show with me and share their thoughts.

Dena Stanley, mother of the House of Mizrahi and founding director of Trans YOUniting: “In one word — amazing! Bravo to McCraney for writing a script depicting the family values of the ballroom community and showing the good and the bad. I thought the cast was dead on and brought so much life. The role of Lucian (House of Light father) didn’t sit well because in my experience house fathers aren’t that evil, but the actor was great. It was amazing to see so much diversity on stage in conservative Pittsburgh. Wig Out! really shows the love, pain and humor of my life — it was like sitting in the living room at one of my house meetings.”

Ciora Thomas, founder of sisTers United: “Wig Out! captures the world of the ballroom, and the writer conveys the struggle, realness and reality. McCraney looks at how love can battle with control in the houses and, as he shows with Lucian’s character, sometimes love and lust are used to maintain control.

“I saw myself in the mother of the house who walked for years and made sacrifices to keep her children fed, safe and educated … only to be challenged by one of her own, then knocked down and written off.

“Everyone needs to check out Wig Out! The reality is eye-opening.”

42nd Street at the Pittsburgh Playhouse is a proper send-off

A Devil Inside at The REP