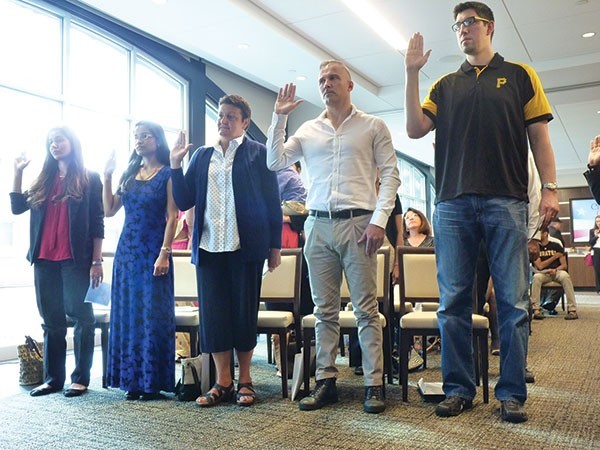 CP photo: Ryan Deto
New American citizens being sworn in at PNC Park in 2016.
No city in the U.S. relies on highly educated and skilled immigrants as much as Pittsburgh. According to census figures, over 57 percent of the region’s immigrants have college degrees, more than every major metro area in the country.

Additionally, immigrants moving to Pittsburgh are basically the only reason the region isn’t leading the nation in population decline. Immigrants have been stemming Pittsburgh’s declining population for years.

But a slew of executive orders recently signed by President Donald Trump could have a profound effect on Pittsburgh because they would halt many of the immigrants who typically move to the Steel City.

In April, Trump ended visas for certain family members of green card holders. Last week, he suspended visas for tech workers, low-skilled workers, and immigrants participating in work-study programs. Immigrants in the U.S. who currently hold valid visas are not affected, and au pairs were exempted. This restrictions will last through the end of this year, until further notice.


So nannies get an exemption, but virtually all H1-B, H2-B, H4, L and J visas cut off through the end of the year along with work authorizations for asylum seekers.

Again.. Pittsburgh has by far the single most educated immigrant flow in the nation for a reason. Now what? pic.twitter.com/lsnrqTBy9a

Local leaders and tech companies are speaking out against these orders and detailing how much they could hurt Pittsburgh.

Duolingo is one of Pittsburgh’s largest tech companies and is the region’s first unicorn, a privately held startup that is valued at more than $1 billion. The company was founded by two immigrants, Luis von Ahn and Severin Hacker, and has created more than 300 jobs across the U.S. On Monday, von Ahn sounded off on Twitter and lamented the decisions.


Imagine if Real Madrid Or Barcelona could only hire players from Spain. They probably wouldn’t be the best in the world anymore. This is what the new executive orders will do to American technology companies.

Christine Rogers-Raetsch, VP of People at Duolingo, says the company's growth is a testament to the contribution immigrants have made here in Pittsburgh and to the U.S. economy in general. She says Duolingo is committed to finding the best talent to work for the language-learning app, and that for foreign workers, stability and confidence in their continued employment is essential.

“As immigration laws continue to become more restrictive or create more uncertainty, we are seeing a trend where foreign workers prefer to work in countries with more favorable immigration policies,” says Rogers-Raetsch. “We are concerned about the future of entrepreneurship in the United States as a result."

Gisele Fetterman is Pennsylvania's Second Lady and was an undocumented immigrant during a period as a child. Born in Brazil, she is now a U.S. citizen and lives with husband Lt. Gov. John Fetterman and three kids in Braddock.
She says Trump’s immigration restrictions are “yet another devastating blow on a long list of direct attacks on immigrants.”

“It continues to send a message that this country is not a welcoming place for immigrants,” says Fetterman. “It’s a terrible decision economically but on brand for his leadership.”

Fetterman says the best way to reverse these decisions and to create a region and country that is more welcoming to immigrants is to vote.