Why this Pittsburgher says fostering pets is not only necessary, but rewarding | Animal Issue | Pittsburgh | Pittsburgh City Paper 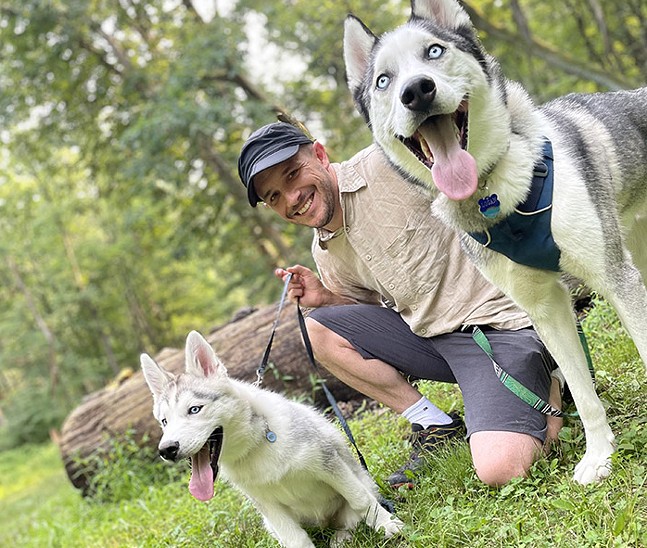 Photo: Miguel Ortiz
Sebastian Foltz and his rescue dog Echo and his foster dog Logan
Closing the door to my bedroom was kind of an afterthought. It'll be quieter. He's in a dog crate. He'll be fine.

His name was Diesel. He was 3. His previous owner must have named him to be ironic. You see, he wasn't a rottweiler, or a doberman, or some other bear of a dog. He was a long-haired “wooly” husky, more fit for the Westminster Dog Show than the back of a pickup truck.

When I got home, it was quiet on the other side of the door. I opened the door to find the crate still closed, but no Diesel. Instead, he was relaxing on my bed, and under my feet was a bathmat sized hole in my carpet (Diesel’s handiwork). Leave the door open. Got it.

That was my introduction to fostering a dog.

It was August 2020, and it had been a month since I had to watch my husky of 12 years, Ike, take his last breath. With pandemic uncertainty, I didn't plan to dive right into fostering. But Husky PAWS rescue — an independent group I'd been in contact with — couldn't find a foster for the dainty fur ball. I think his owners may have fallen on hard times.

It turned out it was just the crate that caused the anxiety. After that, I could leave him in the house by himself, he wouldn't touch a thing. Even though he did escape a reinforced crate one more time. I'm still not sure how he did it.

That's the thing about foster dogs. They all have a history. They're all different. All a challenge. It's not easy, but making progress and finding that forever home makes it worth it.

For his part, Diesel was well trained — escapism notwithstanding. Usually the folks that quit on dogs aren't the best trainers.

I still had Diesel when another husky, Max, came into my life through fostering. Max is barely a year old and less trained than Diesel.

Max's owners gave him up because he ran away too much, and would get covered in burs. They'd given him a “summer haircut,” a no-no for huskies. (Their double coat insulates in the summer, too.) He was also shaved bald in two spots, it was said that the grandkids got gum stuck in his fur. A vet buddy of mine said one of the spots — near his butt — could have been flea related. On top of that, he came across an unending case of diarrhea. Still, he bounced around like a happy ball of energy.

A worm treatment, a better diet, exercise, some structure, and he was a new dog. Never once did he try to escape my yard. I swear he smiled when he played.

Photos: Sebastian Foltz
Sebastian's foster dogs Diesel and Max
That's the thing about huskies, maybe puppies in general — people get them because they're cute. Then they give up on them because they're “too wild” or tend to escape. Both an easy fix if you exercise them and put the time into training. They aren't all easy fixes, though.

People ask me, “How do you do it? How do you give the rescues up?”

Polly Bray from Husky PAWS rescue gave me words to live by: “Pick a quality you don't like. Dwell on that. It'll make it easier.”

For Diesel, that was easy. I'm an outdoor guy. I just pictured the dreadlocks he'd come back with after a camping trip. And I wasn't ready to commit yet after losing my guy Ike.

Max was tougher. I almost kept him, or “foster failed” as they say. But we found a family of four that was too good not to let him go. I'll never forget how the kids — a teenage girl and a younger boy — took to him immediately.

I won't say that my eyes stayed dry on the way home. But the thought of those kids having a dog to grow up with also put a smile on my face — still does.

Fostering is not without challenges. But would I recommend it? Absolutely. Just be ready for some impromptu renovations. Me, I'm getting laminate floors.

There's a definite need for fosters moving forward into the post pandemic world. Rescues and rescue groups are already seeing more and more dogs surrendered. As people return to work, they find out they “just didn't have enough time after all,” or that puppies are cute, but dogs take work.

If you want to get involved, there's plenty of outlets to do it. Look beyond the traditional brick-and-mortar rescues. There are Facebook groups and independent rescues of all kinds. They all need help. If not fostering, maybe just dog walking.

Who knows, you might just foster-fail into your next forever buddy. But be ready for that remodel, just in case. It helps to have support. I couldn't have done it without some friends chipping in with walks and playtime.

Since those two, I've adopted a husky puppy and taken on another foster. We'll see if he turns into a “fail.”Sebastian Foltz is a photojournalist with the Butler Eagle. He lives in the South Side.