Why there are so few riverfront restaurants in Pittsburgh 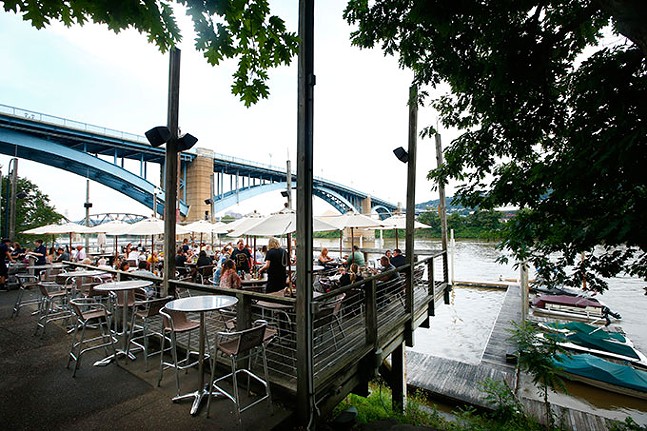 But beyond summer festivities, there is a loud and growing demand to be able to enjoy the rivers all the time, not just during large festivals and other events. And one of those specific demands is riverfront dining.

Stephan Bontrager, the vice president of nonprofit Riverlife, says one of the most common requests the organization hears is to add more restaurants on the river. Currently within the city limits, there are only a handful of restaurants that offer riverside dining with views of the Allegheny, Monongahela, or Ohio rivers. Redfin Blues is a casual eatery on Herrs Island in the Allegheny. Hofbräuhaus Pittsburgh in South Side sits near the water, offering nice views of the Mon. And the Grandview Buffet, located in North Side’s Rivers Casino, looks out onto the Ohio.

Bontrager says there are 15 miles of riverfront just within the Downtown vicinity, so a lack of available property is not really an issue when considering the dearth of riverfront dining.

But Bontrager says getting over preconceptions and attitudes about the rivers has been a major obstacle. Pittsburgh’s industrial history has led people to associate the rivers with pollution, he says, with a hangover lasting even after most of the industry declined.

“I think people used to think, ‘The river is dirty, why would you want to eat next to it?’” says Bontrager. “Twenty years ago, most people would have thought that it was not a nice place to eat.”

Because of this mindset, most of the land along the rivers was undervalued, says Bontrager. This contributed to the properties, which are mostly former industrial sites, to be split up and sold to different owners.

That made Riverlife’s job a lot more difficult when the organization was founded 20 years ago. Bontrager says Pittsburgh lacked a central agency tasked with redeveloping the riverfronts. That meant it was lagging behind other cities with the advantage of one or a few entities owning most of the riverfront property. Pittsburgh was also in financial trouble during most of the 1980s and 1990s, when most other cities started to redevelop their waterfronts.

“We started this process a lot later than so many other cities,” says Bontrager, noting that we still haven’t completely gotten over our aversion to the rivers. “And you still see a ton of that today. We still don’t have a lot of restaurants on the water.”

But Riverlife is optimistic for the future. Trails and public spaces along the river have been a successful part of Riverlife’s strategy to get people to see the rivers as more than a relic of the industrial past. And it has worked. Not only are riverfront developments popping up in the Strip District and the South Side, but Bontrager says half a dozen new restaurants and cafes are planned for the new development near Station Square, many looking out to the river.

Riverlife also hired a new president, Matt Galluzzo of the Lawrenceville Corporation, who will start in September. Galluzzo was a big part of the successful redevelopment of Butler Street, which encouraged small retailers, cafes, restaurants, and bars to fill the neighborhood.

“Investing in the riverfronts makes good economic sense,” says Bontrager.
The tide has shifted, says Bontrager, and developers are now hungry for riverfront properties. TribLive reported earlier this month how development has gotten so hot in the Strip District that developers like the Buncher Corp. are now “eyeing an 11-acre section of the North Side near the 16th Street Bridge as the city’s next development hot spot.” This spot is right on the Allegheny River.

And Bontrager is confident restaurants and other amenities will be part of this new development, even if it still takes a bit of convincing. Riverlife held an event recently near the dog park at 25th Street in the Strip District. They staged a popup booth, and a bunch of food trucks. It attracted hundreds of attendees.

Bontrager hopes events like that will convince developers waterfront dining in Pittsburgh is a good idea.