Why some Pittsburgh industries are seeing persistent labor shortages 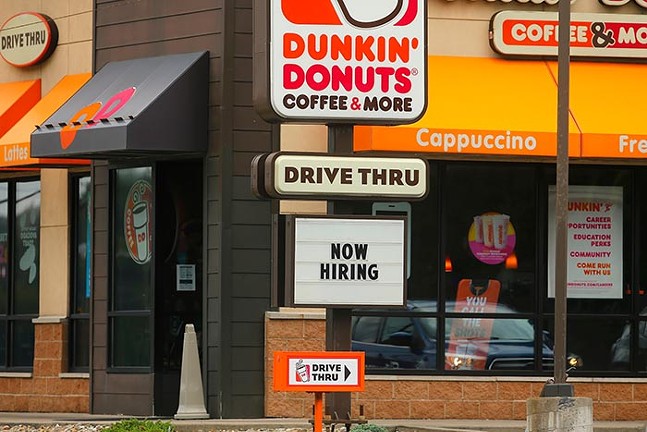 CP Photo: Jared Wickerham
A "Now Hiring" sign is shown at Dunkin’ Donuts along Route 51 on Thu., Aug. 12.
Everyone has seen the signs. At several restaurants and retailers across Pittsburgh, workers have quit en masse or walked out and announced the establishment is closed with hastily made handwritten posters. Sometimes the workers share an emphatic “We Quit” message, sometimes they walk out without letting anyone know. Whether done out of frustration, organized labor action, or public safety, places like Subway, Family Dollar, and Burger King have faced dramatic labor shortages in Pittsburgh this summer.

The walk-outs have been so frequent, many have been left scratching their heads, trying to figure out what is driving this shortage of workers. Some have hypothesized that people are sick of working for low wages and are demanding to be better compensated. Others have guessed there are still lingering fears over coronavirus, as cases have started to increase and vaccination rates have slowed. And, there are likely other factors people might not have thought of at all.

It’s difficult to exactly point to one cause for Pittsburgh’s pandemic labor struggles, but Pittsburgh City Paper spoke to three local experts in hopes of providing some answers. Economists say Pittsburgh’s demographics are likely playing a part, as many of the region’s large number of older workers have been spurred into early retirement thanks to the pandemic, and replacing them with younger workers hasn’t come easy. They also note that, while some industries like hospitality are seeing shortages, there appears to be a corresponding growth in warehousing and logistics jobs. Workforce development experts believe these shifts are likely caused by people looking for better pay and better workplace environments.

But Toni Felice, director of data and evaluation at local workforce development group Partner4Work, is among the experts who believe employers might need to start adjusting to the shifting desires of Pittsburgh’s changing workforce if they want to be able to make sure all their available positions are filled.

“The thing about Pittsburgh is we have a strong work ethic. We want to work,” says Felice. “I think this [pandemic] has given us an opportunity to ask, ‘How do we want to work?’ People used to define themselves by their career, and this pandemic has maybe helped people realize that they don’t want to live that way.”

Felice thinks the quality of jobs available isn’t exactly encouraging people to sprint back into the workforce. Partner4Work compiles job listings and quantifies them, and Felice says most of the job openings over the last 30 days have been in retail. She says these positions have currently and historically offered low wages and tend to have employees work erratic and inconsistent schedules.

Additionally, many retailers and restaurants don’t offer workers much of a career ladder, if any at all, according to Felice. Because of this, Felice understands that many employees are going to jump to different jobs that offer better pay and better scheduling.

Felice says employers, especially those in hospitality and retail, would be smart to raise wages, accommodate schedules better around employee needs, and develop career ladders so workers can build a future for themselves. And she says that trend may be catching on, even if employers in those local industries have a ways to go.

“I think some employers are very open to it,” Felice says of improving pay and working conditions at restaurants and retail. “And there is data about how onboarding a new employer is costly, so avoiding turnover benefits employers, too.”

According to Jim Futrell, vice president of market research at the pro-business group Allegheny Conference on Community Development, there are only two industries in Pittsburgh that have more employment today than they did before the pandemic: construction and transportation/warehousing.

Futrell says it’s likely the transportation and warehousing industry — which includes jobs at places like Amazon distribution centers and warehouses for large grocers like Giant Eagle — has attracted many workers who used to work in the hospitality industries. He explains that restaurants and other hospitality fields tend to offer the lowest pay of any industry in Pittsburgh, and with warehouse job growth thanks to Amazon moving to western Allegheny County and Giant Eagle beefing up its logistics workforce in response to the pandemic, workers have been likely drawn to those places because of better pay.

“There was this big shock to the economy and people started to look at different avenues to grow,” says Futrell.

Additionally, even though restaurants have seen some dramatic signs of worker shortages, Futrell says that Pittsburgh’s hospitality industry is making a rebound in employment. However, he says there are still shortages when it comes to industries related to business travel, which hasn’t resumed on a large scale since the pandemic.

According to the census, the Pittsburgh region did actually grow for the first time in decades, but that growth rate of 0.6% was still well below national average.

“Population growth in the area, that is a factor,” says Futrell. “It brings in workers and creates demand for additional goods and services.” 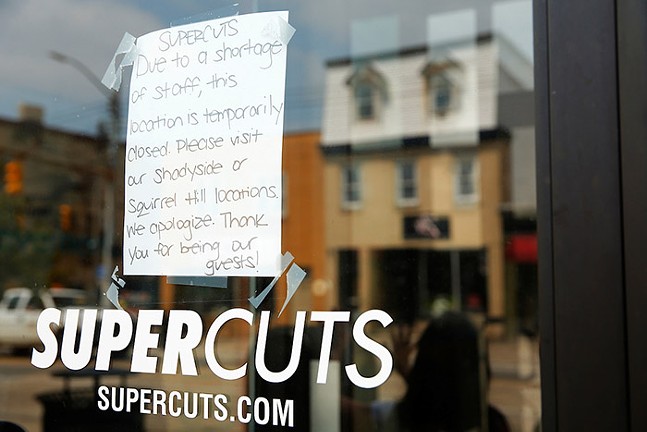 CP Photo: Jared Wickerham
A sign hangs on the door of Supercuts in the South Side on Thu., Aug. 12.
University of Pittsburgh economist Chris Briem warns against explaining the labor shortage as the fault of any one issue, and says that there are COVID and non-COVID issues at play, as well as national issues that Pittsburgh can’t really control, like ones related to childcare and health.

“Some of the workforce was the last to be vaccinated, though not sure that is an issue anymore,” says Briem.

But he does say that, in addition to slow population growth, Pittsburgh demographics may have contributed to a new worker shortage. Briem explains the age of Pittsburgh’s workforce is older than most regions, and says COVID likely spurred on some retirements. And, he adds, Pittsburgh is likely struggling to replace those jobs thanks to a lack of available college students currently in the region due to the pandemic.

“I think a lot of [college students] tended to stick around for a time, but they weren’t here to graduate in place,” says Briem, noting that COVID policies kept many college students remote, and thus not living in Pittsburgh like they normally would. “And you add all that up, and you see a serious shortage in younger workers. Most other places are inching back, but we aren’t inching back.”

Briem says this phenomenon highlights the importance of Pittsburgh’s universities to its overall economy, and he hopes it reminds people of students’ necessary role in the region.

“They are an underappreciated part of the local labor force,” says Briem.

Help Wanted: 100+ Job listings from throughout the Pittsburgh region