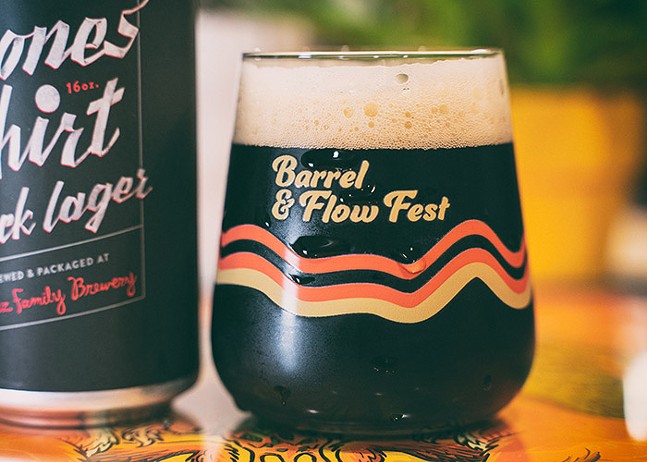 Photo: Barrel & Flow Fest
When Fresh Fest first hit Pittsburgh, it was greeted with open arms and seen as a revelation. America’s first Black craft beer festival was started by locals, and had taken over the city. The extremely popular event led to news coverage that eventually went national. It was something that everyone in Pittsburgh was proud of.

It remained popular the next couple of years, but somewhere along the way, deep disagreements started to fester between two of its founders: Mike Potter and Day Bracey. This led to lawsuits and an official break up of Fresh Fest, and uncertainty lingered about the festival's future in Pittsburgh and its role in the world of craft beer.

Now, Fresh Fest is technically gone, but two Black beer festivals have taken its place, and one is staying in Pittsburgh. Barrel & Flow Fest will run this September — in-person and virtual — from SouthSide Works in Pittsburgh. Bracey acknowledges the contentious nature of the break up, but he is ready to run Barrel & Flow Festival and believes it can expand beyond what Fresh Fest was able to accomplish.

“I think Fresh Fest was great, but we are moving into Barrel & Flow,” says Bracey. “It is a bit more of my baby, a bit more of what I am good at.”

After successful Fresh Fests in 2018 and 2019 — which attracted thousands of attendees and garnered high praise including being voted the second-best beer fest in the country — things started to go south between Bracey and Potter.

In the blog Good Beer Hunting, Bracey said that he and Potter began discussing dissolving their partnership after the 2019 festival. Fresh Fest 2020 was held virtually because of the coronavirus pandemic, but online spats between Bracey and Potter became somewhat frequent. Eventually, Bracey took full ownership of the Pittsburgh festival in a buyout agreement with Potter.

Even after the buyout, animosity continued in 2020 as Bracey filed lawsuits against Potter in Allegheny County courts. According to USA Today, Bracey and Potter made claims and counterclaims over breach of contract and the disposition of tens of thousands of dollars in ticket revenues, with each claiming a lack of transparency with finances.

Potter told Good Beer Hunting in 2020 that he would allow the courts to rule in the dispute, and Bracey told Pittsburgh City Paper that the split between him and Potter “wasn't amicable and there was that baggage.” Bracey told USA Today he doesn’t expect the lawsuit to reach a conclusion. He says he is now focused on his new initiative and the rebranded Pittsburgh’s Black beer festival Barrel & Flow.

Bracey has embraced his rebranded beer fest. He told USA Today that a rebrand was likely coming anyway, even without the high-profile split, noting concerns of Fresh Fest sharing the same name as a Sean “Diddy” Combs tour, which had already been trademarked.

Either way, Bracey says that Barrel & Flow is not just a name change. He says a goal of this year’s festival is to build knowledge and networks to increase getting Black-owned beer into people’s homes.

Fresh Fest was always about highlighting Black-brewed beer in a country where there is so little. The festival was able to accomplish this with successful collaborations, which also brought in Black artists for logo designs. But it didn’t solve the problem of scarcity of Black brewers and the struggles of being able to brew enough barrels of beer for increased distribution.

“The goal is to have 16 Black-owned brewers that are actually brewing the beers themselves,” says Bracey, noting that many of the Black-made beers for the festival are contract brewing out of other craft breweries. “It was kind of depressing. They don’t have a system, they can’t afford the finances to do that much beer.”

Bracey said the pandemic hurt just about every business in America, but also negatively impacted the country’s few Black-owned breweries. He says he has been making efforts to work with a Black grain supplier who offers a program to allow minority or women-owned breweries to hold the grains for three months until a payment can be made.

He says this is all about improving the supply chain for Black brewers in hopes that more Black breweries start and grow to be large enough that wide-scale distribution can happen. Bracey says there is a huge untapped market of consumers who want Black-owned beer all year round, not just at festivals. He hopes that Barrel & Flow can help really get the ball rolling in that effort.

“As a consumer I want Black-owned beer where I live,” says Bracey.

Another new focus that Bracey has for Barrel & Flow is increasing collaborations and bringing Black chefs, artists, performers, and musicians into the beer world. He says all these groups need bigger platforms.

“Food, art, and beer are all part of the beer industry,” says Bracey. “These are also areas where Black people are underrepresented. And so we want to give a bigger platform to chefs, musicians, and artists.”

Barrel & Flow’s new venue will be at the SouthSide Works. Bracey says this increased the capacity to 5,000 people, as opposed to the last in-person Fresh Fest which was 3,000 people. He adds that the space accommodates 13,000 total people, so there will be plenty of room to spread out and social distance.

Barrel & Flow runs Sept. 10-12 and tickets are on sale now. The festival will have more than 50 beers, ciders, and wines made by Black breweries or in collaboration with a Black artist, like hip-hop artist Run the Jewels and local R&B singer INEZ. There will also be a stage with music, live art, and podcasts, as well as brewing and cooking tutorials. Black chefs, like Jackie Page of Love Rocks Cafe in McKees Rocks, will be paired up with comedians for entertainment. The festival will also have an extensive digital component for those who can't attend in person.

“We have a few more breweries this time around,” says Bracey. “We have the best lineup of any beer fest in the country.”Barrel & Flow Fest. Sept. 10-12. SouthSide Works, 424 S. 27th St., South Side. barrelandflow.com