Why Pittsburghers should brag about Ohio Valley Pizza 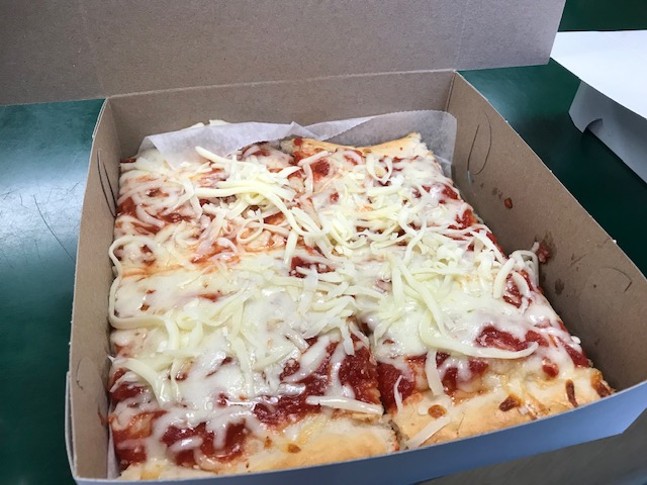 Non-Pittsburghers aren’t generally all that friendly when it comes to our culinary traditions. The perception that Pittsburgh food creators are lacking in innovation is probably thanks to the fact that our most well-known dishes simply involve adding fries to foods that aren't usually served with fries.

And while sometimes those dishes should be insulted, it doesn't stop Pittsburghers from bragging about Primanti’s and other french-fry heavy dishes just the same. It’s Pittsburgh, and we are proud.

In that same vein, I say it is time we start bragging about another Pittsburgh-area creation: Ohio Valley Pizza.

OK, technically Ohio Valley pizza was created in Steubenville, Ohio, post-WWII, but since then, the dish has migrated up the Ohio River and found a home in Beaver County and even in Pittsburgh. It is worth bragging about.

Outsiders may sneer at the approach of using cold toppings on top of hot, but there's more to it than that. It involves a square pizza dough that rises high and achieves a light consistency. The crust underneath has a satisfying crunch that few other styles can match. The sweet sauce is light on spice, making it surprisingly refreshing.

Yes, the toppings are put on cold after the pizza has left the oven, but most of the cheese still melts. The cold toppings also provide a chewy texture that, again, no other pizza style matches.

My favorite Ohio Valley pizza is Police Station Pizza in Ambridge. The shop is also known as Pizza House, and it is located right next to the former police station on Merchant Street.

The ordering style is unique: You choose the number of slices first, wait for a response from the pizza maker, and then request what toppings you want. The place is no-frills but almost always busy with waiting customers. The flat-screen TV faces the pizza makers, not the customers. Workers' rights, baby.

Police Station slices have a good mix of textures. The dough has all the best qualities of a good baguette, with a bit of yeasty flavor, but still incredibly light and airy. The sauce is mild and sweet, and the cheese is mostly melted by the eating time, but cooler than your average slice. An added bonus is that there's never a worry about burning the roof of your mouth on molten cheese.

Ohio Valley pizza is truly unique and it should be celebrated as such. People should travel to Ambridge or D&G Pizza in Beaver Falls, or even DiCarlo’s Original Pizza in Steubenville. And with much more attention played to Beaver County and the Ohio Valley recently because of the cracker plants coming online there, visitors should know they can sample some one-of-a-kind pizza, and usually for extremely cheap (slices are usually around a dollar or less).

Yes, pollution has sort of wrecked the scenic beauty of some of the valley and it looks like more pollution is coming. But that doesn’t mean the Ohio Valley and its people shouldn’t be proud of the things that make it great, like its namesake pizza.

And if you are in Pittsburgh, Beto’s in the Banksville neighborhood is another well-known Ohio Valley Pizza joint. It’s known for the mammoth piles of legitimately cold toppings that adorn each slice, which sometimes polarizes visitors. But just as there are plenty of haters for french-fry salads, there will be haters of Beto’s and other Ohio Valley pizza.

For me, that is all the more reason we should embrace them.