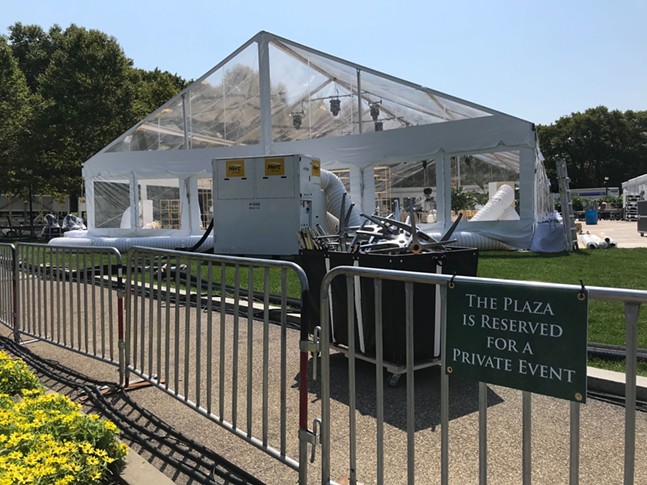 CP photo: Emily Wolfe
Private tent and gates set up at Schenley Plaza
For this week only, one of Pittsburgh’s most popular public parks has become private.

A pair of University of Pittsburgh alumni have rented Schenley Plaza in Oakland from the Pittsburgh Parks Conservancy for their Saturday wedding. Parts of the park have been closed throughout the week as tents, lighting, decorations, and more are being set up to prepare for the event.

The setup hasn’t escaped the notice of Pittsburghers, who have posted on Twitter, Facebook, and Reddit looking for more information about what’s going on. Many were curious for details about the anonymous, expensive-looking event. Others expressed annoyance at the road closings and that one of Pittsburgh’s most popular parks could be shut down for the better part of a week for a private event.

The city of Pittsburgh issued a special events permit for the wedding to LUXE Creative. The company plans luxury events for clients in Pittsburgh and other cities, including lavish weddings at the Pittsburgh Opera and Stage AE. Potential clients can submit details about their planned project on LUXE’s website, as long as it has an estimated budget of at least $10,000.

The final price tag for the Saturday event is unclear, but the cost alone to rent out the plaza isn’t cheap.

The Pittsburgh Parks Conservancy, which manages Schenley Plaza and other major Pittsburgh Parks, charges $7,500 to rent the entire plaza for a full day (from 9 a.m. to 11 p.m). Large sections of the plaza will be closed tomorrow. Some areas of the park will be open Sunday, including the PNC Carousel, which will reopen at 2 p.m. on Sunday.

The spaces are closed for a private event. The individuals hosting the event have requested anonymity. Thank you for your patience, understanding, and support of Pittsburgh parks.

However, throughout the week, the renters have brought large air conditioning units and tents into the park, workers to construct them, and security. Short gates have been set up surrounding the tents and other equipment.

While the full plaza will only be closed to the public on Saturday, parts of the park including the lawn have been unavailable to the public for most of the week. City Paper confirmed with employees at The Porch at Schenley, located on one side of the plaza, that the restaurant will be closed all day Friday and Saturday because of the private event.

According to the conservancy’s list of rental rates for the plaza, full-day events can’t involve heavy objects or plastic on the lawn or any activities that would cause stress to the lawn. John Pepper, a conservancy spokesman, told CP in an email that precautions had been taken to keep the lawn undamaged.

“All precautions have been taken to protect the lawn, although there are provisions for the lawn to be repaired if any damage were to occur with associated costs to be covered by the permittee,” Pepper said.

When asked how often Pittsburgh Parks Conservancy rents out Schenley Plaza, Pepper said the plaza is rented out once or twice a week. However, most rental events CP has observed at the plaza are in the canopied area at the Southwest corner of the plaza, not events that take up so much of the plaza that the restaurants need to close down and gates placed on the lawn.

It is unclear how much money the conservancy will receive for this private event, but as reported earlier, the organization is currently collecting signatures for a November ballot initiative that would increase city property taxes to create a funding mechanism to fund maintenance and rehabilitation of city parks. If approved by a majority of city voters, the tax increase would raise $10 million per year in funding for the Park Conservancy, which has a $400 million backlog of needed park repairs, the Pittsburgh Post-Gazette reported earlier this month.