Despite being the largest immigrant group in Pittsburgh, the region’s Indian celebrations garner little attention from other demographics

Immigrant-inspired festivals are nothing new to Pittsburgh. Little Italy Days is currently shutting down Liberty Avenue in Bloomfield with thousands of attendees. The Greek Food Festival in May filled Saint Nicholas Greek Orthodox Church in Oakland every night for several days.

But unlike Pittsburgh’s European immigrant festivals, which tend to attract everyone, not just immigrants, Indian-cultural festivals are not achieving the same broad success.

Celebrations of Pittsburgh’s South Asian heritage draw little media attention, and are overwhelmingly attended by only Indians and Indian-Americans.

So why aren’t non-Indians embracing the region’s Indian festivals?

There are about 17,000 Indians and Indian-Americans in the Pittsburgh region, making them the area’s largest single immigrant group, outnumbering immigrant groups like Greeks and Greek-Americans.

Indian community leaders aren’t exactly sure why their celebrations haven’t attracted more attention. Some think a large-scale, multi-day festival would attract more attention, but that has been difficult to achieve given the absence of a centralized Indian neighborhood and the diversity of the region’s Indian immigrants. Some say race and religion are a factor.

No matter what, the Indian community believes Pittsburghers will soon fully embrace these communities and their celebrations.

Indian immigrants first came to Pittsburgh in the 1950 in relatively small numbers, initially. Krishna Sharma and her family immigrated to Pittsburgh in late 1970s. At that time, there were only about 500 Indian families living in the area.

But the first Indian populations to move to Pittsburgh were mostly highly-skilled, working at the region’s growing medical and engineering fields. Indian immigrants’ higher-skills garnered high salaries and they were not confined to any one neighborhood. In the 1970s, Indian immigrants established Sri Venkateswara Temple, one of the U.S.’s oldest Hindu temples, which is easily accessible to people all over the region with a location right off the Parkway East in Penn Hills.

Some areas have higher concentrations of Indians than others (Scott Township is 11 percent Indian, according to 2010 figures), but Sharma said Indians are pretty evenly scattered throughout the region. Small concentrations exist in Monroeville, Sewickley, Green Tree, and Fox Chapel.

After several decades of running a successful industrial-supply company for steel mills with her husband, Sharma established the Indian Community Center in 2012.  In the heart of Carnegie, the center caters to an Indian community spread out across the region.

“That is the purpose of the community center, to organize and bring people together,” said Sharma.

She said the lack of a centralized Indian neighborhood could also be hindering the attention paid to Indian festivals.

Several India-related festivals are held throughout the year in the region. There are Holi color festivals in Oakland and Carnegie in April, August marks India Day celebrations, and October throws Diwali festivals in Downtown and Monroeville.

Rashmi Koka organizes the India Day held in Oakland, which has drawn up to 1000 attendees some years. She thinks a centralized, combined event may be necessary to match festivals like Little Italy Days.

“We should really go all out,” she said.

Koka said Pittsburgh’s diversity of Indians could be hindering the cohesion necessary to start a giant festival. India has 29 different states, and most speak different languages and have distinct cultures. Pittsburgh has attracted Indians hailing from many different states, including Gujarat in the west, Punjab in the north, and Tamil Nadu in the south.

Aside from differences within the Indian community is the larger problem of getting non-Indians to embrace Indian festivals.

Sharma and her daughter Mona Mattson held a color festival in April, where participants throw colored powder everywhere to celebrate the arrival of spring. Mattson said it drew less people than they expected.

“We advertised it everywhere, Facebook, a billboard, we did it everywhere, but people didn't come,” said Mattson. “Maybe if we called it a 'color run,' everyone would've shown up. But call it an international color festival and not that many people come.”

“I have felt it too, the lack of recognition,” said Koka. She feels many non-Indians still might be intimidated by Indian culture and cuisine.

Wasi Mohamed is the head of the Islamic Center of Pittsburgh. His parents were born in India and he grew up in Harrisburg. Mohamed has lived in Pittsburgh since 2011, watching the Indian community grow. Since 2000, the Indian population has almost doubled in Allegheny County.

“Race and religion is always related,” said Mohamed. “Whenever communities of color do things that aren't Christian, you tend not to have people in the room who represent those communities. There are lots of festivals in Pittsburgh, but how many Indians on big planning committees.”

Mohamed is currently planning a Muslim food festival, and said it took years for him to figure out all the intricacies of planning. He doesn't believe Indians have been intentionally locked out, just that the system has historically been run without minority representation. With Pittsburgh’s Welcoming Initiative and other efforts, Mohamed sees that changing.

All of these factors combined could be contributing to Indian-based festivals drawing smaller attendance and attention compared other immigrant festivals. But the Indian community wants it to change. 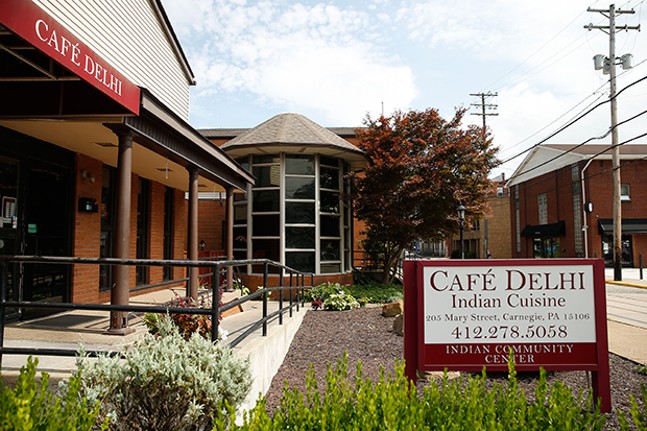 On Aug. 12, about a hundred people paraded through Oakland streets, dancing to Indian music and shouting the Indian battle cry “Jai Hind.” Marches exuded passion and joy while celebrating their native and ancestral land. After the parade, participants joined hundreds more inside the Cathedral of Learning, where booths hawked Indian goods, food, and services.

Koka said she invites all of her Mount Lebanon neighbors to India Day, but few usually show up. She said that won’t stop her from continuing to try.

“We do want to open it everyone,” said Koka.

Krisnha Sharma and Mona Mattson have also been proactive in bridging the gap between Pittsburgh’s Indians and non-Indians. Their India Community Center hosts Indian and non-Indian events, including a popular Jazz Festival in September, traditional Indian events, and classic dance classes.

Sharma seems ready for more recognition with a bigger more popular festival. When CP asked her why a broadly attended India festival hasn’t coalesced, her mind appeared to churn, like a mathematician on the brink of solving a complex equation.

“It will happen,” she says.

India Day 2018 at the University of Pittsburgh 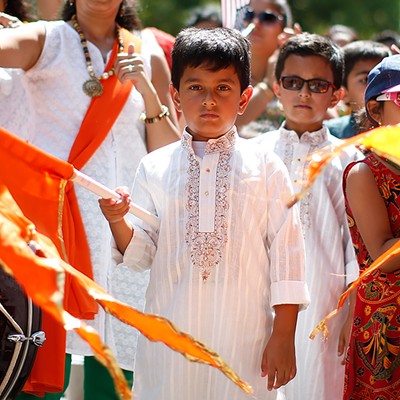