Why do the female pierogi racers have purses? 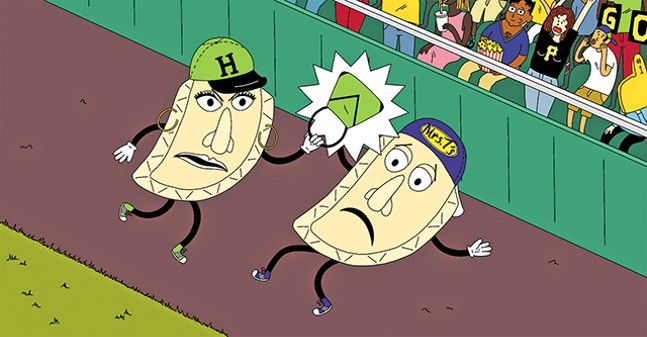 The "Great Pierogy Race" began as mid-game entertainment for the Pittsburgh Pirates in 1999, sponsored by Mrs. T’s pierogies. The lineup originally featured Potato Pete, Sauerkraut Saul, and Cheese Chester. Jalapeno Hannah was added soon after. She remained the lone girl pierogi until 2017, when the Pirates introduced Pizza Penny. Hannah and Penny both have lipstick, mascara, earrings, and a purse. The male pierogies wear only baseball hats and sneakers (except Oliver, who wears a bowtie and glasses and Burt, who has a mustache).

This is such a silly problem that it’s hardly even a problem at all. It's meaningless, but it also might mean something. Why do the female pierogies carry purses, aside from “women be shoppin'”? What, theoretically, is in the purse? Does Penny need to touch-up her lipstick mid-run? Does Hannah carry pierogi tampons? Why do the pierogies have a gender in the first place? If the girl pierogies have additional accessories, couldn’t the boy pierogies have drawstring backpacks or whatever it is men use?

Some of these questions might be answerable, but neither of the Pirates employees nor a pierogi runner I contacted for this story would respond to any request for comment.

The easiest thing to do would be to ignore the pierogi purses, because, again, they are purses carried by a person in a pierogi outfit at a baseball game. But Hannah and Penny and their male pierogi peers exist in the context of a larger debate about mascots and advertising. According to the Geena Davis Institute on Gender in Media, 25.4 percent of female mascots “are presented as gender stereotypes” (compared to 15.9 percent of male mascots). They also note that male mascots outnumber female mascots two-to-one.

Several people replied saying they support the purses because they are sometimes used as weapons against the other pierogies, giving the girls an advantage. Sometimes the pierogies are even declared a winner when the purse crosses the finish line before their pierogi body. But as @PghAdventurer pointed out, the accessories make the pierogies “less aerodynamic.” They're weighed down by the purses, just like a real human woman would be if she had to run with a purse. @Huffakingit replied saying “the purses aren’t bad per se, but the others should have purses too,” calling for “tote bag boy representation.”

At its most basic, a purse serves no different purpose than the deep pockets so generously provided to men's pants and jackets, but it's used as a signifier to make women frivolous and needy for wanting to carry around a wallet, keys, makeup, tampons, etc. (By contrast, men with purses or any kind of bag are frequently used as easy punchlines in movies, TV shows, and ads — shorthand for not being masculine.)

It feels like they gave the pierogies purses and jewelry because it's how unprepared they imagine women to be to take on any sport. It feels like Hannah and Penny are a small byproduct of how women aren’t taken seriously in athletics.

I mostly laugh off the pierogies’ purses as another dumb manifestation of gender, but when I really think about it, it makes me sad to picture some board room full of Pirates employees drafting an image of the new lady pierogi, laughing as they draw her lipstick. A 2010 article in the Pittsburgh Post-Gazette mentioned that there were women runners in the past but none that season. I'd guess there are none this season either (though, again, no one would confirm this).

I don’t know if there is a solution to this non-problem. My nightmare is that someone reads this and starts the hashtag #BanThePurses. I don’t think getting rid of the purses would solve any gender inequalities or mistreatment of women in professional sports. I just think if I went to a game and saw Hannah and Penny’s outfits when I was a young girl playing softball, it would’ve made me feel small.