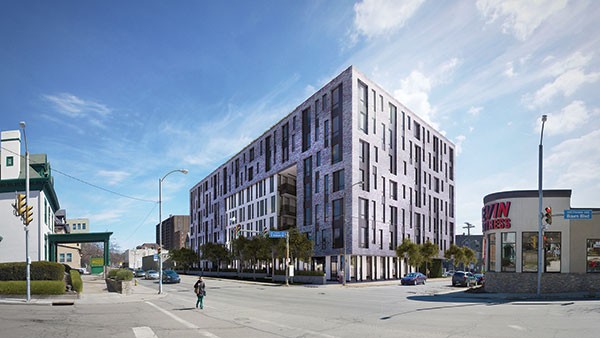 Artist's rendering courtesy of Workshop/APD
One done right: The Vitmore, on Baum Boulevard, in Friendship

Pittsburgh is about to get a very nice mixed-use building for multi-unit housing and retail on Baum Boulevard, in Friendship. The Vitmore (whose developer is Vitmore LLC) is a seven-story, 103-unit project, designed by Workshop/APD architects of New York. Its combination of community support, sustainable amenities and high-quality architectural design is making it an exception among Pittsburgh real-estate developments, many of which have lacked some or all of these attributes.

Please, everybody, try to act normal.

For its part, the city's Planning Commission reacted effusively, full of praise and unexpected pleasure. Commission head Christine Mondor commented, "The architects laid out very clearly both private amenities and public benefits. It went beyond what was laid out in the criteria" of the Baum Centre Overlay District Guidelines, which provide minimum standards for the area. Such overachieving designs should appear all the time — not leave us thinking that the commission had never really seen a decent building design before. Maybe they haven't.

Pittsburgh is experiencing a building boom, but so much of it is bad. The Yards, in the Strip, by Oxford Development, is all cheap materials and grudgingly small fenestration in an underdeveloped façade. Whatever the landscape amenities might be, the architecture is just awful. Likewise, the apartments called Skyvue 3333 Forbes, in Oakland, are some of the worst architecture the city has seen in recent memory. This frantic agglomeration of hackneyed and mishandled motifs is a desperate but failed effort to make this beast look somehow less monstrous than it really is. For this we lost the Allegheny County Health Department, a building whose admirable restraint and dignity clearly made no impression on the architects of Skyvue. How this thing passed the Planning Commission is a mystery. Meanwhile, the housing at Bakery Square is by turns too large, too cheap and too unimaginative.

If Pittsburgh is going to engage best practices and international standards, then architectural design needs to be part of the equation. It's as easy as keeping up with quality design journals, domestic and foreign, then holding our favorite local developers to such standards, instead of letting them fall short time after time. But Pittsburgh seems to be too busy patting itself on the back to realize that good architecture does not stop with a few environmentally sustainable features here or some community involvement there. Those things are necessary but not sufficient. We have zero-energy buildings, which are admirable, but you couldn't pick them out of a lineup. And we are too busy having Sally Field-esque "You really like me" moments with inconsequential hipster blogs instead of getting serious about good design (among our other our perennial needs for critique and improvement).

So it was actually a great and necessary pleasure a few months ago when Mondor called out U.S. Steel for the anonymous and undercooked suburban-office-park design that they unveiled with such fanfare for the old Civic Arena site.

Suddenly, a public figure, with actual credentials and responsibilities to pass judgment on architecture, was doing so. In the ensuing flurry of activity, a few design changes on the order of rearranged deck chairs were proposed, but were neither convincingly posted, published or debated. Now, U.S. Steel is announcing layoffs by the thousands. Frankly, we'd be better off if this forgettable design were forgotten.

In this context, the Vitmore seems rather miraculous, when it is in fact simply good. Make your bloated floorplate as huge as possible in the lamentable but common local practice? No. The architects carved a portion of the center of the building out for light and air. "We felt we'd get a good public amenity from [that]," says architect Andrew Kotchen, in a phone interview. Complain about how hard it is to make money with decent design in the Pittsburgh market? No. "The numbers are completely different than New York, but we had a desire and interest in achieving a high level of design while being mindful of the budget." Take your unfinished, context-free construction documents and present them to the planning commission? No. "The planning commission seemed to like the quality of our presentation." Throw two colors of Dry-vit, add a few balconies and call it a day? No. "I think we did well with the overall design of the project and the skin of the project. Creating a big box is not always an easy thing." Indeed, among the building's many features, this compositional sense is especially balanced — fresh and rhythmic while maintaining neighborliness.

Kotchen is quick to credit a team starting with the developer and including Moshier Architects locally. "I don't think we are doing anything that novel," he says. "Study the site, study the conditions, look at the program."

They seem like they do this all the time. Why the hell don't we?