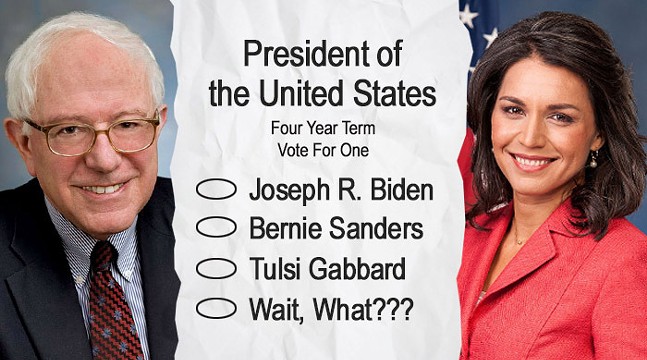 If you're filling out your mail-in ballot (due before June 2!), you may have noticed that Joe Biden is not the only candidate listed as the Democratic nominee for president. Though he is the presumed nominee as the only candidate left in the race, Sen. Bernie Sanders (I-Vermont) and Rep. Tulsi Gabbard (D-Hawaii) both appear on the ballot and are still viable voting options.

Why are Bernie Sanders and Tulsi Gabbard still on the ballot?
When he announced the suspension of his campaign on April 8, Sanders said that he would remain on the ballot in states that have not yet held primary elections. While it's unlikely that he would get enough votes to get the nomination, voting for Sanders during the primary would still accrue delegates for the Democratic National Convention (which will likely be held virtually in August).

What happens if I vote for Bernie Sanders (or Tulsi Gabbard) instead of Joe Biden?
Sanders needs 25% of the delegates at the Democratic National Convention in order to be on the three committees at the convention that help shape the party's platform and the structure of upcoming elections. If this sounds vague, it's because it's unclear what issues Sanders delegates could have influence over until the convention actually happens.

But mostly, Sanders (or Gabbard?) getting any significant portion of the vote, despite not being in the race, would be an indication to Biden and the Democratic leadership that those voters are still a demographic worth paying attention to.

So does it really matter who I vote for?
The way the current primary system is structured makes it seems like states that vote later, including Pennsylvania, don't even get a say in the presidential nomination. But voting is a right, and it is your right to choose the person you believe in the most (or hate the least).

Ultimately, you should vote for the candidate you think is the best person to lead the country, whether you think they have already secured the nomination or whether it seems impossible for them to win.