Why are so many Black women talking about leaving Pittsburgh?

CP Design: Abbie Adams
Black people leaving the city of Pittsburgh has been a huge topic of conversation. On March 23, award-winning author Deesha Philyaw, who recently signed a deal with HBO for her 2020 book The Secret Lives of Church Ladies, tweeted that she was leaving Pittsburgh for a “Blacker” city with a thriving arts and literature community. She later wrote a piece for Bloomberg’s CityLab explaining what she meant by Blacker, and giving reasons for wanting to leave. And since, a chain reaction of comments went off.

Philyaw told Pittsburgh City Paper in an email that after her tweet and the CityLab article, many people reached out to inform her that she wasn’t the only Black woman looking to leave Pittsburgh.

“Since my Bloomberg op-ed, I've had a few Black women reach out to me — some of them friends, some of them strangers — to share that they also long to leave or have plans to leave,” says Philyaw. “The city's unchecked racism, housing issues, and poor career and dating prospects are the main reasons they want to leave.”

During a recent special city council meeting regarding the departure of Black Pittsburghers from the city, one stat was repeated throughout the many testimonials of residents: from 2009 to 2018, the city of Pittsburgh lost 7,000 Black residents. That doesn’t necessarily mean the Black residents relocating out of Pittsburgh have left for cities miles away; many of the 7,000 reported moved to the suburbs surrounding Pittsburgh.

This number has been called an “exodus” by many, with various groups arguing whether displacement (forced to leave through forces outside of their control) or flight (choosing to leave for greener pastures or a change of pace) is the lead cause. The likely answer is a combination of both, among other factors.

A 2019 Gender and Equity report commissioned by the city revealed Pittsburgh is one of the worst cities in the country for health and economic outcomes of Black women. Combine that with how media portrayals and lack of opportunities for Black people contribute to negative perceptions of Pittsburgh’s Black communities, and you have a recipe for a region that will never see Black growth unless something changes. A region that will continue to fail at retaining and attracting Black people who have the means to move.

Pittsburgh City Paper spoke with three Black women who have left or are planning to leave the city about their reasons, and what life looks like beyond Pittsburgh.

Joy KMT, a mother of five who once lived in Pittsburgh but left the city, says her decision to leave had to do with the quality of life for herself and her children. KMT ended up relocating to Puerto Rico after initially leaving Pittsburgh, but she tried to come back. What she says prevented her from successfully returning to Pittsburgh was lack of affordable housing.

“I spent 6 months AirBnb hopping, looking for housing,” she says.

Eventually, she ended up settling down with her family in Virginia. She says that things have improved for her greatly.

KMT says that her life growing up as a Pittsburgh native was beset by trauma. She talked about seeing her childhood home on the once popular and controversial TV show COPS while she was growing up.

Pittsburgh neighborhoods considered historically or traditionally Black are often plagued by negative press coverage around crime rates. In a 2019 report by Columbia Journalism Review, media scholar Letrell Deshan Crittenden cited that people of color were more likely to be portrayed as criminals in news media in Pittsburgh than white counterparts.

“People of color are overrepresented as criminals. People of color who are the victims of disasters, or who suffer from drug addiction are given less favorable news coverage than similarly impacted whites,” reads the report. “These stereotypes, in turn, have a negative impact on the perception whites have toward people of color in everyday life.”

The racism Black women experienced in Pittsburgh was a big determining factor in why they are considering leaving, or have already left, says KMT.

“Ultimately Black people just are not [supported], the power structures are put in place to reemphasize the status quo and that's just what it is. Like people talk all a whole lot about equity and this and that,” says KMT. “But you know, I come back to Pittsburgh and ride through East Liberty, and it’s painful. I can remember being a teenager on the South Side and seeing recruitment flyers for the [Ku Klux] Klan.” 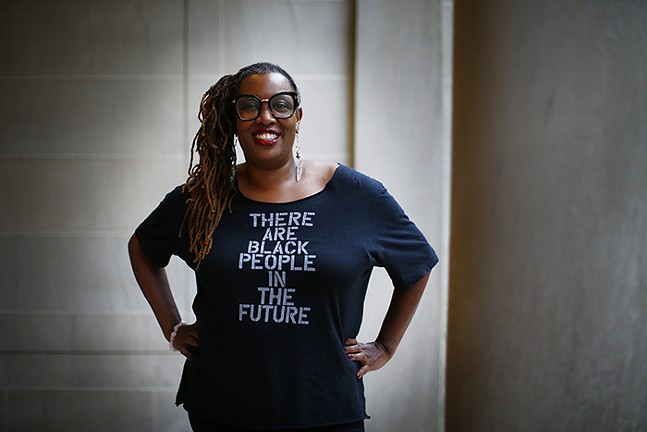 CP Photo: Jared Wickerham
Deesha Philyaw
Another big factor that came up in City Paper’s conversations with Black women about their decision to leave was clear: racism on a systemic level affects the interpersonal relationships of Black people.

Photographer, DJ, and creative director sarah huny young moved to Pittsburgh from New York City in April of 2014 after her cousin, Pittsburgh writer Damon Young, suggested she come to the city and pursue opportunities in artist funding. You’ve probably heard her name before, or been to an event that she was curating, so while young has certainly made a name for herself in the city, that doesn’t always translate to happiness and a drive to stay here.

Young and other interviewees echoed statements Philyaw included in her Bloomberg piece about a lack of funding for Black people. “It’s fair to say I’ve achieved what I’ve achieved despite Pittsburgh, not because of it,” wrote Philyaw. Young and others also add that pursuing artistic endeavors creates hostility in those communities.

“I think when you have a lack of resources and a lack of opportunities that it creates a competition, not a healthy competitiveness because I'm a competitive person,” says young. “I think that is how I survived in New York, but there is an unhealthy, toxic competition thing that happens here because of lack of resources. The way that I phrased it before is we're sitting here fighting over crumbs instead of addressing why there are only crumbs.”

The perception that the city isn’t a place that champions diversity comes across to some in what projects are funded by nonprofits and corporations in the city, as well as the general job market and what positions Black people are able to fill. 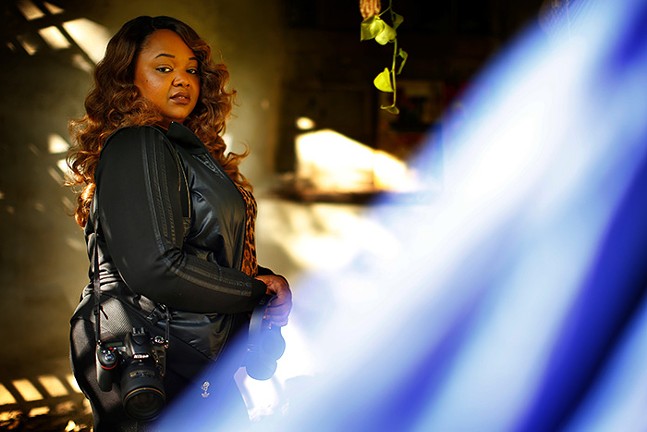 CP Photo: Jared Wickerham
sarah huny young
“I think that a lot of people fight over the same small allotment of resources, being that this is one of the largest, if not the largest nonprofit city in the world with a large amount of nonprofit dollars,” says KMT. “It seems ridiculous to me, the small amounts, small pools of money that people fight over in order to do their work. It's not even just the nonprofit world. It's like, even if you're trying to get a job or anything like that, the amount of resources and opportunities that are available to people that are Black in the city is minuscule compared to the amount of resources and the opportunities that are actually available.”

All of the Black women that CP spoke to happen to be mothers, and that was a deciding factor in both why some are still in Pittsburgh, and why they are planning to leave. Taking children out of school systems they’ve been ingrained in, have already made friends and connections in, is often a very tough task for mothers, and keeps them in a city they perhaps aren’t thriving in personally. young says her exit strategy is in place for 2023, when her daughter graduates from high school. Tara Fay Coleman, a local artist and curator, is also raising Black children in Pittsburgh.

“I know how difficult it was for me to come to the city and adjust to going to an all-white school where people were openly racist,” says Coleman. “And if I'm experiencing that level of racism, even looking how I look and my proximity to whiteness because I'm biracial, I don't want to put my fully Black-presenting daughter through that.”

Coleman also echoed concerns and criticisms about the lack of opportunity for Black people in the city.

“You're pouring money into this more well-known organization and thinking, like, ‘Oh, we're supporting Black arts.’ No, a Black arts sector in Pittsburgh is a huge ecosystem that could thrive with adequate support,” she says. “And when we look at equity, we have to look at, like, are the funds being fairly allocated? Is everybody getting a piece of the pie? Are people being built up to stand next to one another? And that's not how things are in this city.”

The POISE foundation study also found that young professional African Americans were least likely to remain in their current neighborhoods (42%) and most likely to move out of the Pittsburgh region altogether. When Philyaw’s tweet went viral, it highlighted another problem with Pittsburgh that the POISE study echoes. The city not only is doing a poor job of retaining its Black residents, it also isn’t attracting new Black residents to the area from other cities, despite being touted as “most livable” and relatively affordable compared to bigger cities like New York City and Los Angeles. The study found that Black residents are less likely to recommend their community as a place for others to live. 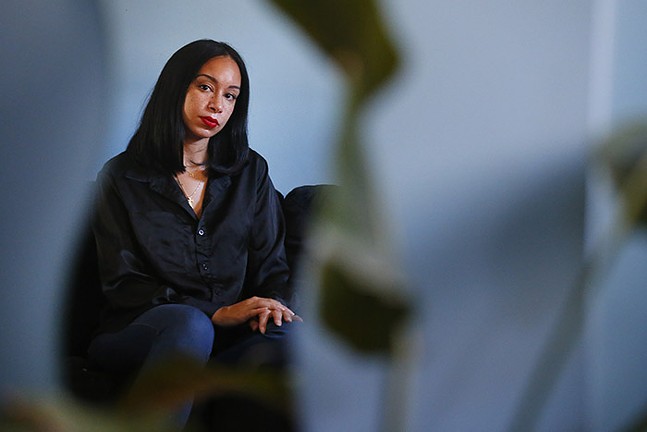 CP Photo: Jared Wickerham
Tara Fay Coleman
Andre Perry is a senior fellow at the Brookings Institute and author of Know Your Price: Valuing Black Lives and Property in America’s Black Cities. He grew up in Wilkinsburg, and noted many Black Pittsburghers like himself who left had the resources to do so, which is a big problem for Pittsburgh because this means a continued loss of talented Black people.

"When people leave, they probably have the resources to leave, and they are also probably the risk takers that you need in the city,” says Perry. “You don’t just lose talent. You lose a mindset. When Black women and college-educated folks leave, it really hurts the city more than just a loss of a person.”

And for the Black women who have left Pittsburgh, how have things changed?

“My levels of stress decreased. I was able to think, breathe. I wasn't constantly retraumatized or in crisis,” says KMT. “My housing is more secure, but I think that's a personal blessing because housing is tough down here [in Virginia], too. There are community conflicts, but it's not as deeply bitter about resources. There are more Black people, even in many of the rural areas out here.”

Back in Pittsburgh, the city has just elected its likely first-ever Black mayor in May’s Democratic primary election, with Rep. Ed Gainey beating a two-term incumbent after running a campaign on progressive issues like support for the Black Lives Matter movement, a sign that the city might be moving in a direction open to change. But for many Black women in Pittsburgh, there’s still a lot more work that needs done.

“I just don’t want to die here,” says Coleman. “I feel like I talk so much about how Black women’s quality of life is affected just living here, but that’s not a cause I want to die for. I have people that need me. I can’t be a martyr. It’s not fair for any of us.”