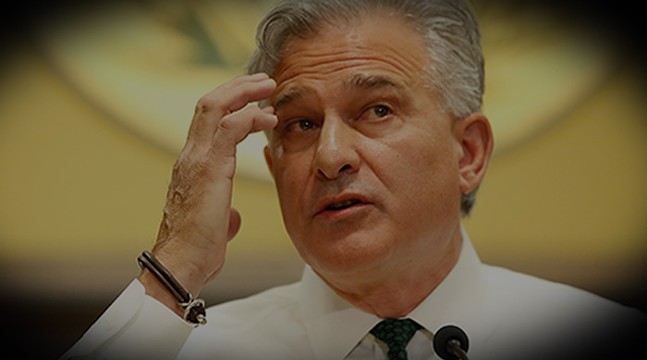 Public battles have also been fairly regular between Zappala, a moderate Democrat, and Democratic Pittsburgh Mayor Bill Peduto over gun-control policies over the years. In 2019, Zappala’s office received criticism for its role in expanding the use of certain surveillance cameras, which have been criticized by the Department of Defense as being highly susceptible to hacks.

This year, Zappala made national headlines for banning plea deals with a Black attorney who called his office “systemically racist.” He rescinded that policy after widespread criticism of violating First Amendment rights, but advocates have regularly pointed out how racial disparities in the county’s criminal justice system have persisted under Zappala’s tenure.

With all these controversies, one might think Zappala would be one of the most infamous district attorneys in the country, but it's quite the opposite. Zappala seems to shake off these scandals relatively easily and aside from a few local headlines, remains out of the spotlight.

Instead, progressive DAs in places like Philadelphia and San Francisco are being put under a microscope, and blamed for upticks in crime rates. Some criminal justice experts say that DAs have little effect on crime rates, but these district attorneys are getting the blame from the media and political opponents nonetheless. And even though homicides and violent crime rates have risen in Allegheny County too, Zappala’s name hasn’t been mentioned in the county’s crime discussion at all.

It all begs the questions: Why has Zappala avoided so much condemnation over the years?

Criminal justice advocates are no ally to Zappala, and some believe he garners less attention compared to more progressive district attorneys because of the status quo inherent in our criminal justice system, and because of how the media approaches crime reporting. But they don’t think those realities should let Zappala and DAs like him off the hook. The American Civil Liberties Union wants Zappala to be more transparent and follow through on campaign promises, like lowering cash bail usage in Allegheny County. But it's unclear if Zappala has any incentive to heed those requests, as forces appear to be keeping his office, and its powerful role, out of the limelight.

Perceptions, of course, don’t equate to reality. Violent crime rates across the country are actually much lower than 30 years ago when crime rates were historically high. Homicides and other violent crime rates across dozens of big cities, including Pittsburgh, have increased in the first half of 2021 compared to last year and some previous years, but they are still well below the high crime rate years of the 1980s and 1990s.

Something is driving this discrepancy between facts and reality, and national criminal justice advocate David Menschel thinks the media is playing an outsized role, especially in certain cities. In Philadelphia, San Francisco, and New York City, upticks in crime are being amplified ad nauseam, and Menschel says district attorneys who have advocated for criminal justice reforms are being unfairly maligned. 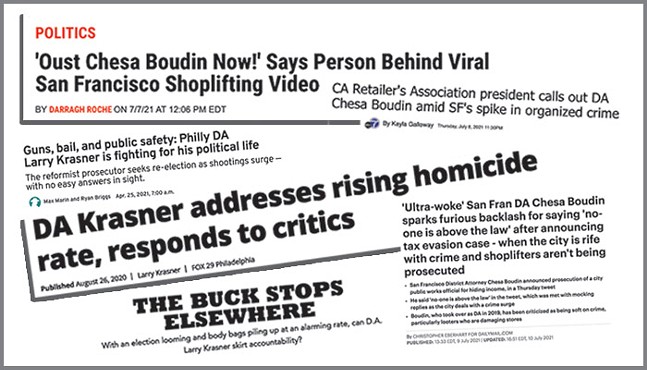 In Philadelphia, an entire political campaign was raged against District Attorney Larry Krasner that casted blame on the progressive prosecutor for a rise in shootings. While that campaign garnered a lot of attention from local and national media, Krasner won re-election in a landslide.

San Francisco District Attorney Chesa Boudin is currently facing a recall effort in the city, and has been the subject of several sensationalized reports blaming him for rising crime rates and, sometimes, even individual instances of crime. All the coverage led Washington Post opinion writer Radley Balko to call out some of the San Francisco reporting, which then led Balko, who has covered policing and criminal justice for about two decades, to receive vitriol on social media.

“Don’t recall ever getting this fanatical a response over a local politician,” tweeted Balko on June 21.

Menschel acknowledges that progressive DAs, or district attorneys who institute criminal justice reforms, are shouldering more of the blame for rising crime, adding that it is “complete bullshit.”

“Homicides went up in New York City, but they are still lower than the rates from years ago,” says Menschel. “In San Francisco, murders were basically even. In Baltimore, murders went down, even though the DA there decriminalized 10 different things recently.”

Meanwhile, DAs like Zappala who are more comfortable with the status quo and aren’t vocal about reforms aren’t being called out at all.

Even so, there are no calls for Zappala to tackle Pittsburgh’s rising violent crime trends. Allegheny County’s District Attorney also hasn’t been present at recent public safety events announcing efforts to combat the rise in Pittsburgh gun violence.


“It was hard to get people to write about prosecutors doing bad things.”

Zappala did take heat recently after TribLive published an email he sent to prosecutors in his office calling on them to halt plea deals with Milton Raiford, a well-known Black lawyer who called Zappala’s office “systematically racist.” A handful of local leaders called on Zappala to resign, and about a dozen asked Zappala to apologize, open his office to investigation, and rescind the policy. Zappala did rescind the plea deal ban, but didn’t apologize and no investigation into his office has been announced.

This controversy generated headlines and stories for about a week in Pittsburgh, and a few national news stories, but nothing compared to the ongoing crime reporting of cities like Philadelphia, San Francisco, or New York City. Even commenters on social media have strayed from tying Zappala to crime rates.

This leads to an ecosystem where criticisms of DAs like Krasner or Boudin get rewarded with press coverage, while those who avoid blaming DAs for crime contribute to helping DAs like Zappala avoid the spotlight.

When asked about the gun violence rates in Pittsburgh and if DA Zappala has been helpful, Pittsburgh Mayor Bill Peduto’s office avoided taking any swipes at Zappala.

“Our focus is on creating safe and vibrant neighborhoods. We work closely with our Office of Community Services and Violence Prevention, Group Violence Intervention outreach teams, Office of Community Health and Safety and Pittsburgh Bureau of Police to provide comprehensive approaches to addressing violence in the City,” says Peduto spokesperson Molly Onufer in a statement to Pittsburgh City Paper. “We welcome all partners public and private and at all levels of government to this critical work.”

In June, Peduto did call for Zappala’s office to be investigated following the plea ban scandal, but stories on Zappala quickly faded.

Menschel says this is because of the legacy of bad crime reporting in the United States. Menschel, who is based in Portland, Ore., started his advocacy efforts on criminal justice reform by trying to get newspapers to cover illegal and unethical activity carried out by prosecutors. But he says he regularly ran into uninterested reporters. He acknowledges that the media is beginning to be more responsive to criminal justice advocacy, but adds that the country still has a long way to go.

He says there could be a carry-over effect where stories about DAs behaving badly just don’t get amplified as much as headlines and sensationalized stories about rising crime. Menschel called national crime reporting a “crisis” and blamed the country’s slow progress and lowering mass incarceration rates on politicians and the press. He noted that, historically, more liberal politicians and prosecutors tend to get blamed for crime over conservatives.

“It was hard to get people to write about prosecutors doing bad things,” says Menschel, who helped start a foundation that led to the creation of criminal justice news site The Appeal. “The ideology of carcerality … really what [the media and politicians] are doing are just echoing those tropes, the tropes that crimes are caused by 'namby-pamby liberals.'” 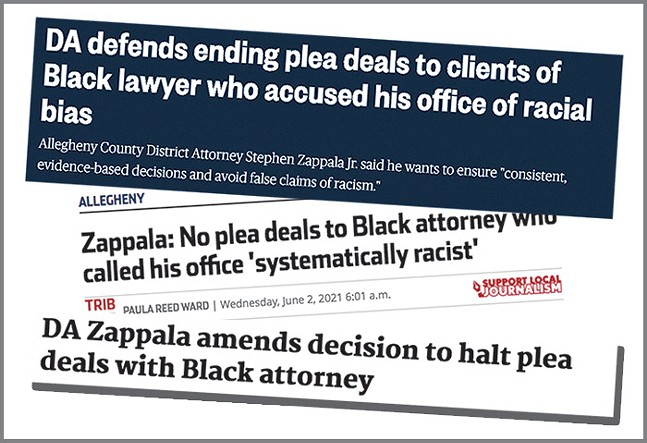 In 2019, Zappala fended off a more progressive challenger in his re-election bid, in part by openly campaigning for Republican and conservative votes. This was during the same period that Peduto took blame in Pittsburgh media for instances of violent crime in Downtown Pittsburgh, with some calling on him to increase police patrols, despite data showing overall crime was down compared to previous years.

Tierra Bradford, the Criminal Justice Policy Advocate for ACLU of Pennsylvania, says she believes many Pittsburghers have gotten comfortable with how Zappala’s office has operated over the decades, and even though Pittsburgh is hungry for criminal justice reforms, she says “people maybe don’t realize that that change needs to come from the district attorney.”

Bradford says Zappala’s office hasn’t been transparent in providing data about lowering uses of cash bail, despite campaign promises supporting efforts to reduce the practice. She also notes Allegheny County’s problems with probation practices, and how people have had their probation extended simply because they can’t afford fees.

The ACLU is calling on Zappala to make more information public so advocates and leaders know what needs to be addressed, what can be fixed, and what is being done correctly.

But lack of transparency could be an intentional strategy on Zappala’s part. In 2016, he didn’t participate in a county-wide criminal justice task force, and he has balked at requests from advocates to be more vocal about reforms for years.

DA Zappala’s office did not respond to a request for comment for this story.

Bradford says she can’t assume what Zappala’s mindset is, but notes his office can have a powerful role to improve things in the region, if it wanted to.

“I can’t speak to what Zappala is thinking,” says Bradford, “but we elect our officials to make our city better, and staying with the status quo is not going to make Pittsburgh better.”