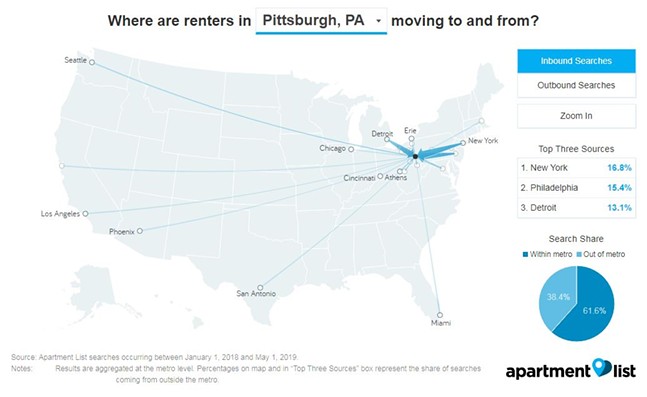 Screenshot from apartmentlist.com
A map showing who from outside of Pittsburgh is searching for places to live in the city
Accolades, new condos, and livability rankings aside, who is actually moving to Pittsburgh?

The apartment-search site recently created its first-ever Renter Migration Report. The study analyzed millions of searches, from both registered and unregistered users, to see where people are preparing to, or interested in, moving to. The data is broken down into inbound searches (those originating from inside a metro area) and outbound searches (those originating from outside a metro area). Then both those searches are broken down by whether people are looking to move within their metro area or outside of it.

New Yorkers are the most interested in moving to Pittsburgh. Almost 17 percent of all searches for Pittsburgh that originated outside the city came from NYC. The next two top origins were Philadelphia (15.4 percent) and Detroit (13.1 percent).

In total, about 38 percent of apartment hunters from outside of Pittsburgh are interested in Pittsburgh, which puts the Steel City just out of the top 10 in metro areas drawing national interest. Among the top 25 largest metros, Tampa is the most desirable with 63 percent, and Detroit is least desirable at 22 percent.

This positive interest still hasn’t led to any actual population growth, as Pittsburgh overall still has a rapidly aging population and very low levels of international migration. According to the latest census figures, the Pittsburgh metro area is still losing thousands of people each year to domestic migration. From July 2017 to July 2018, 4,225 more people moved out of Pittsburgh than moved in, domestically.

Apartment List says its search data can help act as supplemental data to census migration data, since its information happens closer to real-time. The site also clarifies that its data is “not fully representative of the American population as a whole,” and that rental searches don’t always result in completed moves.

“Search data from platforms such as Apartment List can help supplement our understanding of migration patterns by serving as a leading indicator that shows where renters are looking to move before those moves have actually occurred,” read the conclusion of the migration study.