Who's Afraid of Virginia Woolf?

Edward Albee's scorcher Who's Afraid of Virginia Woolf? has always occupied a special place in my heart. Not only is it one of the most important plays of the 20th century, it is also one of the most entertaining. It's three acts and three hours of almost nonstop theatrical fireworks: drama with a capital "D" about two married couples passing a late night with sex, booze and endless emotional turmoil -- a veritable rollercoaster of screams, laughs and chills. What's not to love?

To say that this no-holds-barred, profanity-laced, bitter and biting examination of, among other things, American marriage created waves at its 1962 Broadway opening is an understatement. When the majority of the Pulitzer committee that year refused to award the play because of the language, the rest of the committee resigned in protest. It was made into a not-particularly-good film in 1966, remembered chiefly because of Elizabeth Taylor and Richard Burton in the leads, and because Albee received a half-million dollars for the screen rights, a record-breaker at the time.

For a 2004 Broadway revival, Albee decided that the play needed a bit of a face-lift. He made some changes and cuts, and this new version is now the only script available for production.

Which brings us all the way out to Washington, Pa., where Off the Wall Theater presents Who's Afraid of Virginia Woolf? As a life-long student of this play, what I found most interesting was to note the changes between the new and old. (And it's not like I sat there following it with an old copy: I blush to admit this, but when I was a kid Fahrenheit 451 scared me so much that I actually started memorizing all the printed material in our house -- including this play, Gone With the Wind and The Exorcist.)

The first thing you notice is that Albee has toughened up the already legendarily tough language; the screw ups, up yourses and screwing machines are replaced by the less coy Anglo-Saxon "fuck" ... as in "fuck you," "fuck you" and "fucking machine," respectively. There's even an added "motherfucker" from Martha.

Albee's eliminated some of the foreshadowing about the son as well. But the biggest change is that at the end of the second act, Honey does not hear the doorbell and does not re-enter, leaving George on stage alone ... so he can no longer outline his intention to kill the child. (While I liked most of the changes, I do admit that I prefer the old Act II ending.)

Considering how grateful I am for the opportunity to see the new version staged, I feel almost traitorous to say that the Off the Wall production itself isn't up to the level of the play. The pacing is slow, the blocking static (just because there are chairs on stage doesn't mean the actors have to set up residence in them) and the energy is about one-quarter of what it needs to be. Virginia Woolf should explode, not simmer and sputter.

Not that Chris Bondi, Jessica D'Arcy, Virginia Wall Gruenert and Scott Sortman aren't good; they just haven't embraced the play's wild ride. If everybody on stage could raise his or her character's stakes considerably, and let us see just what that desperation looks like (as well as cutting 20 minutes by picking up those cues), they'd be a lot closer to what Albee had in mind. 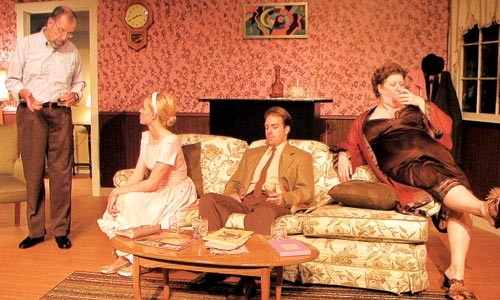 Married, no children: Off the Wall Theater's Who's Afraid of Virginia Woolf?