This production is daring and alive 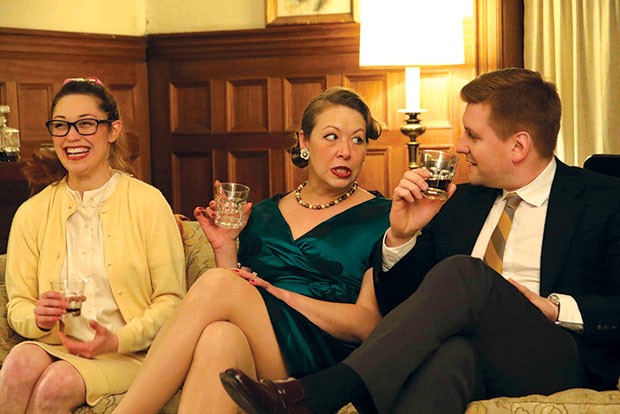 continues through March 25. Cup-A-Jo Productions in Point Breeze (address provided with ticket purchase). $20-25. 412-334-3126 or cupajo.woolf@gmail.com
Putting actors on stage usually results in them acting like they are on a stage — their vocalizations and movements scaled to their distance from the audience.

What happens if the audience is not separated from the actors, but sits in the same room with them? And in a house, not a theater? It’s kind of like visiting a zoo without bars. And, depending on the animals, potentially dangerous.

Cup-A-Jo Productions and director Everett Lowe answer this question with a thrilling staging of Edward Albee’s 1962 play Who’s Afraid of Virginia Woolf? that is performed entirely in a living room, with the audience sharing the same carpet upon which drinks are spilled, bottles smashed, and bodies fall.

George (Brett Sullivan Santry) and Martha (Joanna Lowe) — hosts for an evening of drinking and games after a college faculty party — are like great has-been actors who never were; who play their fantasy roles every weekend on the stage of their living room, with other couples as unsuspecting characters in supporting roles. Their games — drunkenly imposed on guests — with names like “Humiliate the Host,” “Hump the Hostess,” “Get the Guests,” and “Bringing Up Baby,” are really the titles of their own twisted, delusional plays. Honey (Hilary Caldwell) and Nick (Tom Kolos), innocent newlyweds, play along naively.

Lowe’s portrayal of Martha is powerful, and she amps up the sexy in her tight black dress to seduce the much younger Nick like a tiger batting around a mouse. (She could also take Elizabeth Taylor, who played the part in the 1966 film, in a cage fight.) Santry’s George is much less bloviated than most portrayals of this role, utilizing a cunning undertone to battle Martha, all the more effective in conversational versus stage voicing.

Kolos gives the dumb-blond Nick just enough narcissism to make him bait for Martha, while Caldwell’s giggling Honey convinces us she’s never said no to a glass of brandy, and has never kept one down either. Both avoid the clichéd pitfalls of these roles.

This production is daring and alive, like visiting a strange zoo filled with creatures who bite with their words, and make love with their claws.