"My favorite pastime other than cooking is fishing." 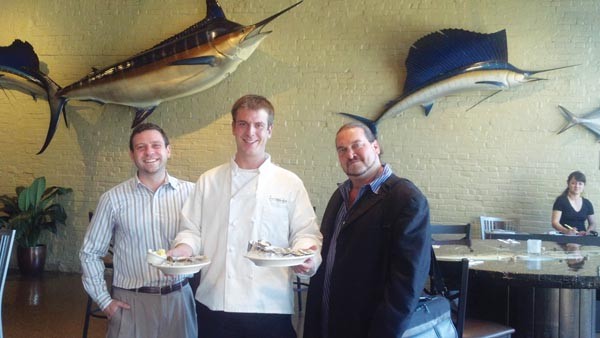 Overhearing a table of customers ordering the oysters, Luke Wholey waved away his general manager's suggestion that he let one of the employees in the kitchen shuck them.

Jogging to the second-floor cooler of his new restaurant, the Wild Alaskan Grille in the Strip District, the 28-year-old immediately went to work on the job himself: "I love shucking oysters," he said.

Luke is the youngest Wholey to get into the family business. The Robert Wholey Company, which began in 1912 in McKees Rocks and opened its Strip District location in 1959, is currently celebrating its 100th anniversary in the seafood business.

Luke Wholey says the restaurant, which opened July 27, is his own inspiration, grown out of his experience cooking shore lunches as a fishing guide in Alaska and selling grilled salmon plate lunches outside of his family's business just a few blocks away.

"My favorite pastime other than cooking is fishing," Wholey says, adding that he never flirted with the idea of doing anything other than working with seafood.

His career path was set at about 4 or 5 years old as he spent time at the family's fish market, he says.

"I asked one of the fish-cutters to teach me how to fillet a fish, and I had to stand on a milk crate by the cutting board to get up high enough," he says. Although, he adds, "My grandpa saw I had a knife in my hand and just about lost it."

The Wild Alaskan Grille covers about 2,000 square feet and seats 75, including those in a private party space.

Menu items can include sea scallops from New Bedford, Mass., Texas gulf shrimp and oysters from Delaware or Cape Cod. And, of course, wild Alaskan salmon.

"All of our employees are overly educated," says general manager Jason Hondros, explaining that Wholey gives the staff in-depth explanations of the fish served each day — even offering information about each species' mating season.

"Luke wasn't just born into the family and [doesn't] just take it as a business. It is his passion," he says.