It offers food inspired by local cultural, and agricultural, traditions 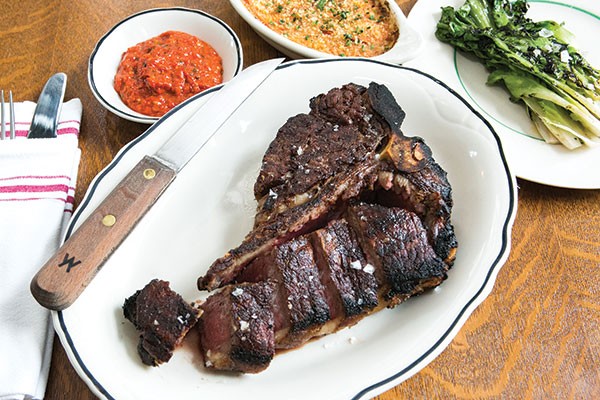 The opening of Pittsburgh’s own Ace Hotel in the long-empty East Liberty YMCA is a milestone in the city’s meteoric rise from Rust Belt has-been. Like a beard on a hipster, its particular combination of authentic historicism and 21st-century savvy is so of the moment, we can almost hear it tick. As East Liberty residents, we have no need to partake of Ace’s boutique lodgings. But we’ve joined the throngs congregating in the bar and restaurant in the old Y’s first-floor lobby and reading room, where young men once engaged in more abstemious pursuits.

While the high ceilings, ornate plaster moldings and other bones of these grand old public spaces have been carefully preserved, their formality has been softened with comfortable furnishings, casual curtains and plenty of houseplants. Nothing quite matches, conveying the feeling of a home where people have acquired and combined favorite pieces over the years, rather than a unified work of interior design. In the lounge, you might sit on a stool or a bench, in an armchair or even a rocking chair. In the restaurant, named Whitfield after Ace’s street address, the mismatched dishes have a thrifted vibe.

As part of Ace’s overall curatorial approach, it is the venue’s practice to source local goods and hire local professionals whenever possible in each of the company’s locations. Whitfield has been placed in the hands of Brent Young, a ’Burgh boy made good as a butcher in Brooklyn. The executive and pastry chefs are both women: Bethany Zozula, until recently at Eleven, and Casey Shively, another local boomeranging back from New York.

Ace’s website describes Whitfield as a “neighborhood tavern,” but this is no gastropub. Instead of dandified bar food, Whitfield offers something more like refined country food with recipes inspired by the cultural, and agricultural, traditions of Pittsburgh and Western Pennsylvania: braised rabbit with semolina gnocchi, roasted duck with spätzle, and steak. And plenty of steak. Befitting Young’s background, there’s both a signature steak frites with a modestly sized cut and a list of larger — and much more expensive — cuts intended for sharing.

Our dinner began with focaccia and lardo, each traditional and yet distinctive in its own way. The bread, baked in house, was almost double the thickness of typical focaccia. It was hearty, but that tall crumb was also light and almost pillowy, with an unmistakable yeasty flavor. The lardo — which is roughly what it sounds like, whipped lard in place of whipped butter — was pure white and fluffy, mildly flavored with undertones of umami. So mild, in fact, that it was overshadowed by the (not unpleasantly) salty bread.

Cheeseburgers being delivered to neighboring tables were so delectably aromatic, Angelique could not resist ordering one of her own. Made from local grass-fed beef, served on a buttery brioche bun, and dressed with pickled jalapeño, fried onions and mustard-mayo as well as melted cheddar, this was an excellent burger. The patty was simply juicy and robustly meaty, leaving the toppings to perform a complex interplay of piquant, even pungent, and sweetly creamy complementary notes.

Roasted duck breast, too, was nearly perfect, the meat rich and succulent, the skin crisp. We enjoyed the sides almost as much as the main event. Red cabbage, often served sweet and mushy, was here crisp and zingy. Tender, lovably lumpy spaetzle were topped with deeply flavored shreds of confit leg for a dish that was entrée-worthy in itself. A perfectly good helping of beets seemed ordinary by comparison.

The chicken in chicken and dumplings — one boneless breast and one joint of wing — maintained this high standard. Not only was the meat cooked to near-perfection, but its rich, subtly-smoked flavor was extraordinary in a thick gravy, wisely seasoned simply with herbs. Carrots served with this dish were nice and tender-firm. But a shredded Brussels sprout salad didn’t add much except roughage, and the biscuits were frankly disappointing lumps of mush.

Unlike the poultry, “The Steak” — an eight-ounce cut of the butcher’s choice, sirloin on the night we were there — was imperfectly cooked, with a near-raw center and a thick gray band. This was really a shame, since it was a great cut, with a great béarnaise sauce that was rich yet subtle. Fingerling potatoes, a bit mealy, were nevertheless terrific dipped in this sauce or stacked with the steak. Instead of the traditional salad, this steak-and-potatoes meal was served with a side of sweet, soft cooked peppers.

Hipster culture’s obsession with the artisanal and the authentic finds full expression at the Ace Hotel’s Whitfield. Fortunately, it is also delicious.