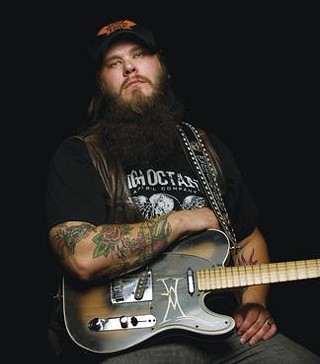 Looking at Whitey Morgan -- leather jacket, long hair and beard, considerable tattoo work -- one might mistakenly think him a metal guitarist. In fact, though, Morgan has more in common with Merle Haggard than Tony Iommi, writing a brand of country that's simply classic.

There's no shortage of contemporary bands aping old country sounds right now: Every town's got a few outfits with mandolins and upright basses attempting to wrest country music from what it's become in the mainstream. But newgrass and neo-folk bands tend to try to resuscitate a past too long gone for most of us to remember -- and one that's perhaps a bit idealized. (So many reference The Carter Family as an ideal of primitive folk, but, of course, they were a traveling show-biz outfit, albeit one from an earlier era.)

But Whitey Morgan and the 78's, a Michigan honky-tonk band that recently released its self-titled second album, fall into a different tradition: the outlaw country of the '60s and '70s. Waylon Jennings, Kris Kristofferson, Haggard were Nashville punks of a sort -- longhaired balladeers who didn't match industry norms, but found success despite it.

It's no surprise Morgan and his band found a home on Bloodshot, the Chicago label that houses a collection of country and punk artists from Jon Langford to Wayne "The Train" Hancock and Exene Cervenka. The common bond isn't so much a sound as an attitude: Bloodshot artists shy away from indie trendiness (though the label was once home to The Old 97s and Whiskeytown) and maintain fidelity to their musical ideals.

The band's new record has a timelessness that may have a bit to do with the members' hometown. While some of the musicians have roots in the South, they hail from Flint, Mich., the automobile town that's seen significant economic decline in the past 25 years (and was the setting for Michael Moore's 1989 documentary Roger and Me, about General Motors' downsizing in the '80s). Flint has a reputation as a down-on-its-luck town, and Whitey Morgan and the 78's have created a pretty down-on-their-luck record. (This is also one outlaw band you won't see sporting the stars-and-bars, a nice break for country fans who don't wish the South had won.)

"I Ain't Drunk" is an upbeat song about going on a bender (and, of course, denial). "Long Road Home" is a haunting late-night trucking tune. The band is at its rockingest on "Where Do You Want It?" -- a barroom-brawl ballad that puts the "outlaw" into Whitey Morgan's country.

There are certain bands that take old music and update it with a contemporary sheen; others are faithful to their roots in a way that ends up feeling slightly hokey. Whitey Morgan and the 78's take the alternative route: The band makes music that could be from 1972 just as easily as from 2011. It's a lonely road, perhaps, but only because it's tough to find.