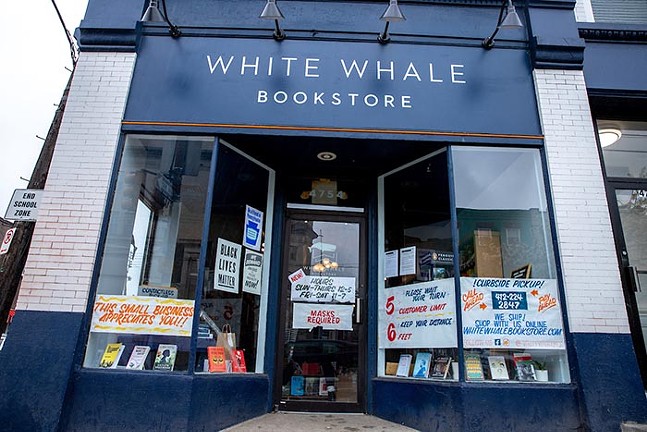 CP Photo: Kaycee Orwig
White Whale Bookstore
Pittsburgh has a robust independent bookstore scene, and one of its staples is celebrating its fifth anniversary on Fri., Oct. 15 with an expansion. White Whale Bookstore opened in October 2016 in Bloomfield under the care and helm of Adlai and Jill Yeomans, and it will mark its fifth year by expanding its store into the neighboring storefront, adding more sales and raffles, and eventually a coffee bar.

The bookstore has teased the expansion on social media, including a neon whale inside and a new exterior sign that advertises coffee, but the expansion is only the latest in White Whale’s journey of supporting the local literary community.

“It's been a wild ride,” Jill Yeomans says. “We have kind of always been flying by the seat of our pants and trying to figure out next steps while doing as much as we could in the present.”

The Yeomans bought the store from Lesley Rains in May 2016, back when it was still the East End Book Exchange. They pivoted to selling new books rather than used, and its stock ranges from contemporary literary fiction and nonfiction, poetry, local authors, children’s books, and social sciences such as history and philosophy.

The bookstore has continued to expand, bringing on Anna Claire Weber as an events coordinator in 2018 and partnering with Pittsburgh Arts and Lectures in fall of 2019 to support their 10 evenings, Poets Aloud, and Made Local series. As the bookstore grew, the Yeomans were able to bring on more staff members — affectionately called the “Whale Pod” — who have helped develop the bookstore’s identity and place in the community.

“I shouldn't be surprised, but our staff just adds so much to what we can offer and just the feel of the store, the impact of it,” Jill says.

The pandemic challenged the bookstore as they had to close their doors to in-person shopping, but White Whale was determined to continue serving the community and mimic the feeling of its in-person communal space online. Instead of closing indefinitely, White Whale pivoted to online sales and digital events, with Weber working to transition scheduled in-person events to virtual ones.

The bookstore has also added a mural inspired by socialist realism from Brian Gonnella to the side of its white brick building. After a controversy with McCaffery Interests, the Chicago-based company developing The Terminal in the Strip District, the bookstore’s lease expanded to include the neighboring storefront as of June 1.

The expansion will double the retail floorspace, giving the booksellers more space to highlight books with cases for local authors and Pittsburgh books, as well as face-out displays rather than solely spine-out layouts, which Jill says will give everything “a little more breathing room.” The new retail space will house White Whale’s nonfiction selections, and the bookstore will expand its offerings for poetry, social sciences, science-fiction, fantasy, and romance.

As promised by the new signage, White Whale plans on offering coffee by the holidays. The bookstore has contracted TJ Fairchild, the owner of Commonplace Coffee, to help develop a coffee bar, which was in place when they moved into the space. Once it’s up and running, White Whale will serve and stock Commonplace Coffee, although they plan to expand into stocking other local roasters as well.

“It feels like a natural fit. I feel like their values really align with ours,” Jill says.

Moving forward, White Whale will continue with its virtual events, with tentative plans to return to in-person events in January 2022 if it is safe. Its one exception — and the first in-person event the store has hosted since March 2020 — will be Jan Beatty's book launch of her memoir, American Bastard, at Michael Lotenero’s art studio in the Strip District.

“It really feels pretty incredible that we've been able to last five years in a digital climate and then through a pandemic, and then to be able to expand — just feels like a gift,” Jill says. “And that is completely thanks to our Pittsburgh community and our supporters.”
White Whale Bookstore: 4754 Liberty Ave., Bloomfield. whitewhalebookstore.com