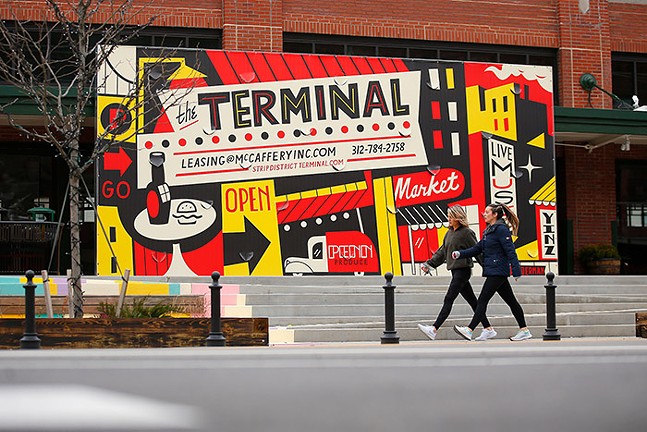 On Mon., May 3, The Terminal in the Strip District announced it had signed its latest tenant, the New York-based combination bookstore and ice cream chain called Posman Books. Not long after the news spread, local business White Whale Bookstore posted a now-viral thread on its Instagram account alleging that McCaffery Interests, the Chicago-based company developing The Terminal, had strung them along, making them believe that they, not Posman, would be the chosen bookseller to move in.

The thread goes on to say that, in mid-November 2020, the owners "moved quickly to secure our spot at The Terminal," including settling on lease terms and signing a Letter of Intent, all with the confirmation that McCaffery was not negotiating with another bookstore.

Then nothing, until the news about Posman Books officially broke. White Whale says that, when they confronted McCaffery about this development, the company said they had actually already brokered a lease with Posman. This led the Yeomans to believe that McCaffery had dangled their agreement in front of Posman as a "bargaining tool" to get the chain to move in.

Dan McCaffery, CEO of McCaffery Interests, told the Pittsburgh Post-Gazette “We don’t scheme to do deals." He also said McCaffery "had been negotiating with Posman for over a year," and had only turned to White Whale when it seemed like the chain did not have the financing for a new location.

In addition, Heather Skomba​, senior marketing director for McCaffery, argues that White Whale signed a term sheet, not a Letter of Intent, in January 2021. She explains that a term sheet precedes an LOI and "clearly states all terms are subject to approval of the tenant’s financials."

She adds, "The exchange of financial documents was in process during a 4-6 week period during which a prior tenant-prospect resurfaced with much further advanced plans, a draft lease and other financial paperwork."

White Whale shared a PDF copy of the signed document with CP, and it does read "Term Sheet" at the top.

Still, the claims made by White Whale, including that a McCaffery representative pursued them for months, pressuring them to open a second location in The Terminal, only be ghosted by the company once a document was signed, is, it seems, only the tip of the iceberg. Since White Whale posted their thread on Monday, other local businesses have come forward with similar stories about McCaffery.

Not only that, the allegations have awoken interest in exploring issues with McCaffery's handling of The Terminal in the years since it began transforming the former Produce Terminal, aka the Pennsylvania Fruit Auction and Sales Building, into an expansive mixed-use office, retail, and restaurant space.

"They approached us as well," Moop replied. "With outrageous prices and similar tactics. I know they threw our name around as a bargaining tool as well. I’m so sorry this happened to you. Pittsburgh is not better off with outside exploitative developers." CP reached out to Moop owner Wendy Downs for comment but didn't hear back.

Songbird co-owner Jennifer Orefice says their business had been part of the Pittsburgh Public Market that operated in the Strip District until 2016 and went to McCaffery expressing interest in renting space in The Terminal. She says they were met with "mostly just a lot of run around, not getting back to us, things seeming promising, and then not working out.

"It was an annoying experience but nothing like what White Whale is dealing with," says Orefice, adding, "We moved from the Strip District several years ago because these type of landlording practices are very common there."

Pittsburgh residents and council members familiar with the project have also expressed outrage and frustration, primarily on social media, that an outside company is, as they view it, turning a historic Pittsburgh site into a strip mall, and has little interest in investing in the community.

Pittsburgh City Councilor Deb Gross (D-Highland Park) represents the Strip District and has been involved in the proceedings leading up to The Terminal's development. When asked if she had any knowledge of the White Whale situation prior to the Instagram post, she answered, "You mean McCaffrey being disingenuous negotiating leases with local businesses? No, this is the first time finding out about it."

Gross goes on to describe how she and her fellow council members, Pittsburgh Mayor Bill Peduto, and the Urban Redevelopment Authority of Pittsburgh, which owns The Terminal property, have long tried to hammer out the terms of the McCaffery lease.

Months of negotiating resulted in a Memorandum of Understanding, effective March 2017, that set terms for how McCaffery would manage the space. Gross says these terms included McCaffery preserving longtime tenant the Society for Contemporary Craft and renewing their lease, not selling the building outright to McCaffery, and allocating space dedicated to a public market, as well as space for local businesses at a "low, subsidized rent."

So far, McCaffery has not honored all of those terms. The Society for Contemporary Craft, which had occupied the Produce Terminal since 1986, moved out in March 2019 and relocated to a new building in Lawrenceville. While Contemporary Craft declined to comment for this story, executive director Janet McCall previously told CP that their organization “had initially thought we could stay here in the produce terminal after redevelopment.”

"We ultimately felt that we would be better off looking beyond the Strip, just because the market rates have risen so high," McCall had told CP. "It’s one of those things where sometimes you have to make a choice that isn’t your preference.”

Gross says she has been disappointed with developments at The Terminal so far, particularly its apparent disinterest in setting up a public market. She believes the way McCaffery has renovated the space demonstrates this.

"The way this building was originally designed, you could open the doors on both sides," says Gross. "It would have been like having a covered outdoor space, 150,000 square feet accessible from both sides."

She adds that McCaffrey spent $60 million to make it "more like a strip mall."

"They took off all the sliding doors and took off the docks from the back," adds Gross. "And now, it's just enclosed retail space. It's incredibly unfortunate."

In late March, the CP story "What happened to plans for a public market at the new Strip District development?" turned up responses that McCaffrey planned on hosting “several community-built pop-up events" and offering space to a monthly farmers market.

On March 31, less than a week after the CP story ran, The Terminal posted an announcement on its website about a Farmer's Market happening on the third Saturday of each month from April through October. The event description says visitors would find a "selection of local farmers and artisans between the 18th and 20th Street passageways" and that vendors would be "located both indoors and out."

CEO McCaffery also told CP in March that his company is "pursuing a food-centric market, but said that it has been difficult to find one willing to move in," and that, in the time that it will take to place a market in the Terminal, "he promised to fill the space with local vendors for no charge."

Skomba expands on this, saying that McCaffery had found a tenant who would meet the requirements of a "food-centric public market," but that the tenant had to pull out of its lease due to difficulties related to the pandemic.

When CP informed the URA that McCaffery had no current plans for a permanent market, a spokesperson responded that a "disposition contract states that McCaffery will make 'commercially reasonable efforts' to include within the premises of the development a 'food centric' public market."

The article also points out that, in the project's nascent stages, one of the initial bidders for The Terminal, Rubino Development Group, specializes in public market projects, but was turned down by the URA in favor of McCaffery.

This speaks to what Gross sees as a mishandling of The Terminal by the URA and the Peduto administration, believing they have been too generous with McCaffery. Gross claims this includes giving McCaffery a 99-year lease.

McCaffery has rented out some space to local businesses, including the garden store City Grows, Envy Premier Nail Salon, the New Castle-based Walk Run Lift, and OnPar Now, an indoor golf instruction space. Other tenants listed on The Terminal website include a Fine Wine and Good Spirits liquor store, as well as the recently announced Posman.

Skomba points out that McCaffery is obligated to use "commercially reasonable efforts" to lease no less than 40,000 square feet to local and regional businesses. She adds that, as of now, more than 88% of the signed leases are with locally-based tenants. They occupy 24,661 square feet, leaving 135,596 square feet left to lease.

When asked about the White Whale situation with McCaffery, Tim McNulty, Director of Communications for the Office of Mayor William Peduto, responded, "The Mayor's office was not aware that White Whale was interested in opening a location in the Produce Terminal, and separately spoke with Posman Books about their interest in coming to Pittsburgh. The Mayor's office would fully support expansion plans by White Whale or any other small business in the city."

Gross foresees The Terminal ending up like what she views as failing big retail projects in the city, citing the Lazarus Building in Downtown Pittsburgh and the SouthSide Works, a shopping and entertainment district that has been losing tenants over the years.

In a telling twist, McCaffery was behind The Cork Factory in the Strip District, a former industrial site that was converted into luxury apartments and retail space. After Cork Factory saw a revolving door of tenants, the property was sold to Philadelphia company GMH Capital Partners in 2014.

Gross' concern that McCaffery will contribute to the commercial gentrification of Pittsburgh neighborhoods is exacerbated by the company's purchase of a building across the street from The Terminal at 1600 Smallman Street. She believes McCaffery only has a vision for "high-end, out-of-town tenants," meaning that local businesses would not be able to afford the company's inflated rent prices.

Gross appreciates White Whale coming forward with their story, and while she says she has little oversight over McCaffery as a council member, she speculates how they could ensure places like The Terminal are "inclusive and welcoming" for the community.

"If the McCaffery company is failing to lease out this building according to their development commitments, maybe it's time for it to go back to public ownership," she says.

She adds that she believes The Terminal should function as a public marketplace that provides spaces small businesses can afford.

When asked about what they hoped would come out of their public statement, White Whale says they intended it "solely as a word of caution to fellow small business owners."

"White Whale is still doing just fine and we’re not seeking any help or retribution," says White Whale. "But Pittsburgh local biz is a tight-knit community, and we wanted to give people a heads up to push for transparency before they put in the work we did. Since the post, we have heard privately from other (local, family-run) businesses that also had negative interactions around this development, which is disturbing."

The owners added, "Honestly, we’re just hoping people will be even more motivated to support small and local businesses, and especially BIPOC-owned businesses that are often disproportionately affected by — and kept out of — predatory developments. As white business owners, we recognize the privilege we have in being able to speak out without experiencing undue repercussions."

This story has been updated at 11 p.m. on Fri., May 7 with information provided by McCaffery Interests.