While recent incidents of racial discrimination in coffee shops have garnered national attention, it's nothing new for people of color in the industry | Restaurant Reviews | Pittsburgh | Pittsburgh City Paper

While recent incidents of racial discrimination in coffee shops have garnered national attention, it's nothing new for people of color in the industry

“I spend a lot of my time in coffee trying to create a place that’s safe enough for people of color.” 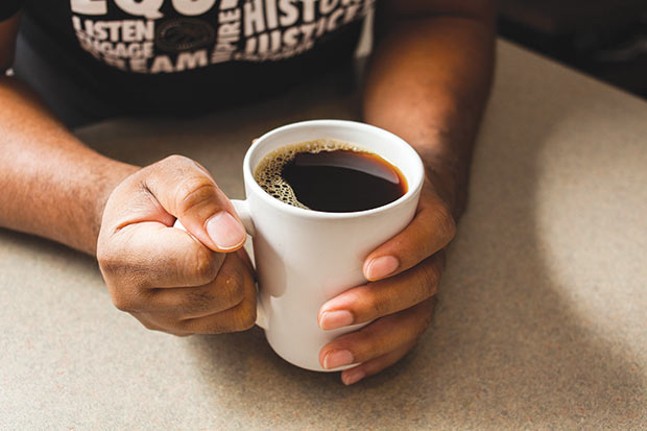 On April 12, at a Starbucks in Philadelphia, two black men were waiting at a table to meet a third person for a business meeting. A manager noticed they hadn’t purchased anything and called the police. The men were arrested.

A fellow patron, Melissa DePino recorded a video of the arrest. It went viral, and sparked outrage and protests from the public. The two men settled with Starbucks for a symbolic $1 each and a commitment from officials to establish a $200,000-program to support young entrepreneurs.

Starbucks will close all of its U.S. stores May 29 for anti-bias training. While many on social media applauded the swiftness and willingness of the company to apologize and engage about this racist incident, others question what this incident signifies about coffee culture and the participation of people of color.

Last week, Starbucks was involved in another racist incident in Los Angeles in which a Latino customer's coffee was labeled "Beaner." These incidents and other recent controversies in which the police were called on people of color for merely being in public spaces have sparked conversations about inclusivity in coffee and other service industries.

“To most people, I’m probably [one of] one or two black people they know in coffee,” says D Stubblefield, who started her coffee career in Pittsburgh and now works in Philadelphia. “I spend a lot of my time in coffee trying to create a place that’s safe enough for people of color to get into [the industry].”

Stubblefield feels that specialty coffee is very polarizing for people of color.

“Most of the shops that I go into don’t feel inclusive. They’re very white spaces.” She says her familiarity with the industry makes it easier to be in these spaces, but for people of color it would be intimidating.

Stubblefield feels that Starbucks’ initial response was weak and points to the company’s  “Race Together” campaign (2015) that encouraged baristas to engage customers in conversations about race. She argues many of the surface actions companies make to celebrate minority groups seem performative, and fail to result in a changed company culture.

“This is a time when people are being asked to put their money where their mouth is,” she says. “The question is less about the bias against these two particular men and more about the bigger issue: Coffee is not very inclusive. This situation is part of a much bigger problem.”

One of the key ways to address this is by hiring and promoting people of color inside businesses. “It’s easy to say ‘Hey this person made a mistake, we’re sorry about that’ but it’s harder to actually confront what it took to get that situation to actually happen. What training are we giving our baristas?”

Cameron Brown, a barista at Espresso a Mano, started at his first coffee job at Crazy Mocha. Throughout his career in coffee, he’s been fighting stereotypes that come with being a person of color working in and patronizing predominantly white spaces. Brown, who grew up in the North Side, recalls trying to introduce high-school friends to coffee culture.


“We’d sit in a coffee shop and they’d ask to leave because they’re uncomfortable. They feel like it’s not their space to be in,” he says.

“It’s tough. I think it would help to see more people of color in coffee.”

Brown feels that even seeing people of color represented in social media or advertising for shops could promote feelings of inclusivity in these spaces.

Being behind the counter can be difficult as well.

“When I first started working in specialty coffee shops, customers seemed distant with me, like they didn’t know what I was doing there,” says Brown. “For instance, I can make a beautiful cortado and they’ll say, ‘Wow, you made that?’ Or if there’s a certain genre of music being played in a coffee shop, I’ll be the first one to be asked what song is playing.

“It’s frustrating when people discredit your expertise in some way.”

Brown often feels he must prove himself more than his white co-workers, and that customers’ reception gets warmer over time.

However, with familiarity can come comments that are directed at his appearance. Like the time a customer referred to Brown, who wears long dreadlocks, as “Rastaman” or when his hair was compared to a breed of dog.

As customers, Stubblefield and Brown each has experienced rudeness and non-acknowledgement at the hands of other baristas. They cite times feeling as though they had to prove coffee knowledge or namedrop workplaces before the barista would offer more details about coffees offered or to justify ordering an “in-the-know” specialty drink.

“It’s super frustrating,” says Brown. “I shouldn’t have to do that.”

In an age where more customers are expecting accountability from businesses and social media makes it simple to document public wrongs, Stubblefield and Brown hope coffee companies will create safer and more welcoming places for people of color to work.

Or just to sit down for a cup of coffee.

Listen to Stubblefield talk about working in the coffee industry as a black woman.