While he may still be learning English, Pittsburgh Pirates’ Jung Ho Kang is fluent in the language of baseball | News | Pittsburgh | Pittsburgh City Paper

While he may still be learning English, Pittsburgh Pirates’ Jung Ho Kang is fluent in the language of baseball

“Baseball’s baseball, so regardless of where you play, that’s the same language to me.”

Think back to the season that Pittsburgh Pirates third baseman Jung Ho Kang had in 2015 and one moment should quickly come to mind. The moment was sudden; it was stark; and it made us immediately feel for the young South Korean athlete.

On July 9, 2015, the world watched as Jung Ho Kang danced wildly in the dugout to Psy’s “Gangnam Style.” It happened quickly and unexpectedly, and it made us all realize that despite coming from another country, and barely speaking English, Kang is just one of the boys. He’s a man playing a kid’s game, and he loves every minute of it.

If your mind immediately went to the afternoon of Sept. 17, when the Chicago Cubs’ Chris Coghlan executed a take-out slide on Kang, who had just stepped on second base and was in the process of making a double play, then you might not know Kang very well at all.

He doesn’t dwell on the negatives. Be it that leg injury (a torn MCL and fractured tibia) or the language barrier he faces every day, Kang works through the obstacles necessary to play at a high level.

“To me, baseball’s baseball so regardless of where you play, that’s the same language to me,” Kang told City Paper through his interpreter, H.K. Kim. “All my teammates and coaching staff made me very comfortable here, along with the fantastic fans back in Pittsburgh. I had a lot of fun last season.”

Kang made his MLB debut in 2015 after being signed by the Pirates in the offseason. The club paid $5 million to the Nexen Heroes (Kang’s team in South Korea) for the rights to exclusively negotiate with him for 30 days. Kang, who was coming off a breakout year with the Heroes (.356 bating average, 49 home runs, 117 RBI), signed with the Pirates for $2.75 million. 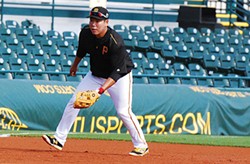 Many wondered whether he’d be able to come close to duplicating the numbers he posted in the Korea Baseball Organization. If he did, the price would be a steal. If he didn’t, the investment wasn’t so large that it would handcuff the team.

Kang did struggle with the Major League game at first, but he was able to make adjustments and turn it around. Pirates pitcher Jeff Locke says Kang’s ability to make those adjustments was even more amazing given the situation.

“If I’m being 100 percent honest, I couldn’t do what he’s done. I couldn’t leave the country and go somewhere where I don’t speak the language, everything is different, and then try to concentrate on baseball,” Locke says. “He’s done a great job of adapting to the game.

“Over here there are guys coming out of the bullpen throwing 95 m.p.h. He had that high leg-kick when he got here and that enabled some guys to sneak some pitches by him. He was able to make the necessary adjustments and have success.”

And he did all of this while moving to a new country and getting used to a new city — although he’s found a lot of things to like about Pittsburgh: “Shout out to Smoke in Lawrenceville,” Kang says with a smile. “They’re the best tacos in town.” And although the transition had to be tough, Kang says he was able to make it work.

“It wasn’t as tough as I expected,” Kang says. “When I played in Korea I was away from my hometown too, so that helped me get used to the new environment here.”

Although he lost the last several weeks of the season, Kang’s rookie numbers were really solid. He hit 15 home runs in 2015, three more than Andrew McCutchen hit in his 2009 rookie season. Kang looks to improve on last season, but for him the numbers only tell part of the story.

“I don’t know how my numbers are going to turn out, but my focus is to enjoy the ride and help my team and teammates win,” Kang says. “Every player has the same kind of pressure, but I’m going to continue to believe in myself and believe in my teammates and work hard to perform.”

Kang’s teammates feel the same about him. Locke says Kang is “a great teammate and an even greater player.”

“You can see the way he plays on the field, and you see his emotion and try to get a sense of his personality, but unless you can come in the clubhouse and see him … there have been so many times that he would come over to me, tap me on the leg and say ‘Hey, good job,’” Locke says. “It’s the little things he does.”

“Just coming over here and taking that leap into the majors and challenging himself says a lot about him,” Locke says. “He’s a guy who’s never really content. He thought, ‘You know what, if I can make it [in South Korea], I can go over there and try to do it.’ Also, he’s not just playing for himself, he’s playing for a lot of people over there.

“He has set such a good example here that other guys are starting to come from South Korea and are getting an opportunity to play. He’s paving that road.”

The Kang phenomenon has convinced teams to take a chance and pay a little more for KBO players. This past offseason, the Cardinals signed closer Seung-Hwan Oh to a one-year deal and the Orioles signed outfielder Hyun Soo Kim to a two-year, $7 million contract. But while Oh has had a good spring for St. Louis, Kim has struggled mightily in Baltimore — so much so that the Orioles are considering making a deal to send him back to South Korea to play. But Kang, who has not only made the transition to the majors, but thrived in the environment, had a little advice for his countrymen ― in English: “Believe in yourself.”