“I feel like, just as in every industry, we don’t get paid as much.” 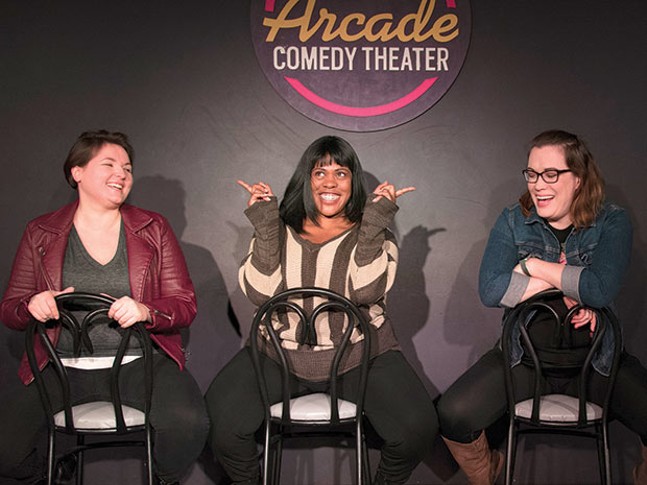 From comments like this to being drafted for shows just because a manager wants to sleep with them to being made to feel as if they’re female first, comic second, women in comedy face a different set of criticisms compared to their male counterparts.

But in the growing Pittsburgh comedy scene, women like Gab Bonesso and Nance Marshall have made themselves known and the traditionally male-dominated field is becoming increasingly inclusive. Still, the culture has some catching up to do.

“Comedy, period, is like a guy’s club type of thing,” says Christina McNeese, a local comedian and the founder of comedy collective ChicksBurgh Comedy. “But there are women who do it. And then within that circle of women there’s different [genres of comedy] scattered in there.”

McNeese started her career as a poet in New York and made the switch to comedy after a poetry slam that was too melancholy for her liking.

“There were some really great poems, but they were all depressing,” McNeese says. “So, I was like, 'someone should tell some jokes so we don’t all kill ourselves when we go home.'”

McNeese, like all the comedians interviewed by City Paper, is fully aware that her treatment and experience as a comedian differs from that of her male colleagues.

“I feel like, just as in every industry, we don’t get paid as much,” McNeese says. “We often have to deal with the bullshit of not knowing if someone wants to put you on a show or if they want to have sex with you… You have to be really tough, you have to be funny, but you have to keep doing it.”

Wondering whether they’re found to actually be funny or simply attractive to the men planning comedy shows is a problem that many women in the industry face. Fellow local comedian Blair Parker echoed these sentiments.

Parker says that despite having more comedic experience, background and knowledge, she has found herself and her ideas being pushed to the side. This is what ultimately drove her from comedy writing to standup.

“I would show up on set to film a sketch that I wrote and directed ... and they would start changing my ideas,” says Parker. “I didn’t feel like any of them were taking me very seriously. So I thought, ‘How can I continue to have these ideas and put them out there on my own?’”

Parker has been in the spotlight since she was a toddler. Originally a dancer, she would perform at the Warner Theatre in Erie in front of thousands of people.

“It’s always just been in my nature to be a performer,” Parker says. “It wasn’t until about high school, though, when my influence of Chris Farley told me to take that turn [to comedy].”

Parker and comedian Suzanne Lawrence say that because there are so few female comedians, there’s a sense of competitiveness among them that works not only to divide the group but also unnecessarily pits them against each other.

“Since it feels like every show has one woman on it, every time a new woman comes on the scene and starts getting booked, it feels like, ‘Oh, I don’t know if this is going to reduce the amount of shows I get booked on,’” says Lawrence. “[Which] is more than if a new guy started in comedy, because there’s so many more guys doing shows.”

Lawrence says she has never quite felt left out of the ring, however. She hasn’t had any experiences of overt discrimination and feels like eventually being the “token-woman comedian” will die out as more women enter the scene.

Lawrence first began dabbling in comedy as a child, donned in a horrendous Tweety-bird dress, armed with a Fozzie Bear joke book, and performing before a room full of company her parents had invited over. She says she’s always had a natural affinity for laughter.

Prevalent in all of these comedians is a love for comedy, for commanding a room and for making audiences laugh. They can all remember fondly the first time they felt a rush from making people laugh.

“Even as a kid, I wanted to write for Saturday Night Live, and do stuff like that,” says fellow comedian Amanda Averell. “So I’ve always wanted it; I just didn’t know how to get there or what to do.”

Averell’s hope for the future of comedy, not just in Pittsburgh, but in general, is that everyone across the board — regardless of gender, race, religion and nationality — can be represented.

“I eventually want it to not be viewed as being a ‘female’ comedian, but just as a comedian,” says Averell. “I want other people who read this [article] to realize that we want more women in the comedy scene, we want to make sure that the demographic — not just of comics, but of supporters of comedy — grows for men and women.”