“This movement is working toward a progressive goal in the bottom-up revolution.” 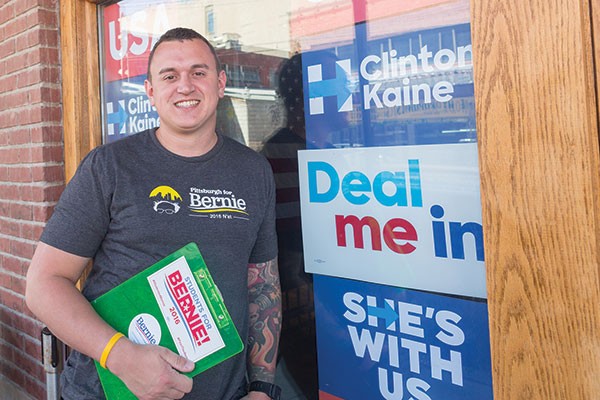 “Pat Toomey and Wall Street, that’s the greatest love story since The Notebook,” Fetterman said of the incumbent U.S. senator from the podium, bolstering McGinty’s case against Toomey’s record on the economy. “We need a senator that’s going to stand up for Pennsylvania, going to stand up for the Mon Valley, and stand up for jobs and protect our workers. And that’s why I’m proud to endorse Katie McGinty.”

McGinty, Fetterman and the others rallied around an economic plan her campaign released that day and railed against Toomey’s work in China, and his “flip-flop” on the Trans-Pacific Partnership trade deal.

Fetterman, a favorite among progressive voters, ran against McGinty in the Democratic primary and endorsed Sanders over Hillary Clinton in the presidential primary. But now he’s thrown his “full-throated support” behind both Clinton and McGinty and says he hopes progressives in this part of the state will do the same. And one group that previously supported the Braddock mayor is doing just that.

While agreement on the top of this year’s ticket is all but out of reach for locals who supported Sanders in the primary, they’ve decided to put their weight behind down-ballot Democratic candidates, including McGinty, attorney-general candidate Josh Shapiro, and Erin McClelland, who is challenging Republican incumbent U.S. Rep. Keith Rothfus for his gerrymandered congressional seat that stretches from Beaver County to Johnstown.

“There’s a lot of division between former Bernie Sanders supporters,” says Alex Austin, who was a pledged delegate for Sanders at the Democratic National Convention. Austin is a veteran, a graduate student and the father of a 12-year-old, whom he doesn’t want to see buried in student debt when she gets older. He’s also concerned about the shortcomings of the Affordable Care Act. “But this movement is working toward a progressive goal in the bottom-up revolution Bernie’s talking about,” he says.

As August waned, members of the former Burghers for Bernie group gathered in their now-defunct East Liberty campaign office to hear a livestream from Sanders himself, who was kicking off his Our Revolution organization — a nonprofit formed to “harness the transformative energy” that Sanders stirred up with his talk of a “political revolution.”

“For me, the biggest thing is to not let this movement die out,” Austin says. “I’d like to see Our Revolution live on through these down-ballot movements taking place right now and hopefully throughout the next four to eight years.”

The “Burghers,” who’ve changed their group’s name to Bridges Not Walls, are not officially tied to Our Revolution, but they’re taking its cues. (Our Revolution did not respond to a request for comment. Last week, the Friends of Bernie Sanders PAC sent out fundraising emails, asking for $2.70 contributions to four Democratic U.S. Senate candidates’ campaigns, including McGinty’s.) Meanwhile, another progressive favorite, U.S. Sen. Elizabeth Warren, of Massachusetts, is slated to campaign for McGinty this week, including a stop in Philadelphia Sept. 9.

The Bridges group has about 30 core volunteers, but through an email list it reaches more than 1,000 people. Members have concerns on a variety of issues — single-payer health care, criminal-justice reform, student debt and the Trans-Pacific Partnership — and from now until November, they’re doubling down on who they think will best align with them: McGinty, Shapiro and McClelland.

“Building excitement for Clinton isn’t going to happen. No one is excited for Hillary Clinton,” says Beth Ussery, one of the original Burghers and another Sanders delegate. “But we need to look at what’s going on with all of the other important races. We have to get Toomey out. If Katie McGinty is my best chance, I’m going to take it.”

One of the first things the group will do is canvass for McGinty. Also, details are being worked out for a presidential-debate watch-party on Sept. 26, where there will be a voter-registration drive and information on how to volunteer for the down-ballot campaigns.

While Ussery feels hopeful about McGinty’s stance against the TPP — labor is the issue Ussery is most heavily involved in — she’s concerned about McGinty’s support of fracking and her past board positions with energy companies. McGinty ran the Pennsylvania Department of Environmental Protection under Gov. Ed Rendell when the fracking boom began, and, in her own run for governor, supported a severance tax on drillers but not a moratorium. Ussery’s worried whether McGinty can satisfy progressive voters who rank the environment as a top priority. “You can’t serve two masters,” she says.

So why are she and her fellow group members heading out to canvass for McGinty?

“If you don’t vote, they don’t have to listen to you at all,” she says.

When asked about progressives’ criticisms of her, McGinty told City Paper, “Look, nobody is going to insist on a stronger environmental cop on the beat than I am.”

She also said that she will be working on another issue near and dear to the progressive heart: getting money out of politics.

“One of my priorities as United States senator will be to overturn Citizens United, and certainly there couldn’t be a bigger difference between myself and Sen. Toomey on all of these issues,” she says. McGinty highlighted her endorsement from the group End Citizens United, which favors a constitutional amendment to reverse the 2010 U.S. Supreme Court decision that effectively ended restrictions on political spending.

She added that after Sanders endorsed her, she had “the honor” of receiving a personal phone call from him. “And here’s where I want to give him such a high five,” she says. “He wanted to make sure that I had as much energy as he has, and I assured him that I did. God bless him.”

Austin, of Bridges Not Walls, is certainly on board with McGinty when it comes to the goal of ending Citizens United, which he says is “basically what has corrupted democracy.”

Western Pennsylvania progressives will have more chances to vet McGinty when she campaigns here later this week.

Less controversial are Shapiro and McClelland, whom local progressives have described using terms like “amazing,” “impressive” and “strong progressive voice.”

“Clearly Erin McClelland is the type of person who’s going to represent our people,” Ussery says, citing her positions on labor and education. “Shapiro, he’s really shown he has an interest in reforming the criminal-justice system in Pennsylvania. We want to know specifically how he plans to do that. I heard him speak at the [Democratic National Convention]; he was wonderful, very engaging.”

Fetterman and his wife, Gisele — who also traveled to the DNC as a pledged Sanders delegate — have come out strong for both Shapiro and McClelland. Gisele Fetterman will be joining McClelland for an event later this month; John Fetterman says that Shapiro is going to “re-imagine what this [AG] office can accomplish.”

Shapiro says that while “people who are violent and pose a threat to society should be locked up … we need to make sure our prisons are no longer clogged with people who have mental illness, are suffering from drug addiction and are nonviolent.”

He says once in office, he would work to implement the recommendations from the bipartisan Justice Reform Initiative (JRI) working group that he chairs. The group formed to address Pennsylvania’s incarceration rate — the highest among Northeastern states — and the $2 billion spent annually on Pennsylvania’s corrections system.

“Special interests have enough lawyers in Harrisburg. It’s time for the people to have a tough attorney general on their side,” he says.

Despite their compromise, enthusiasm and work on down-ballot candidates, Fetterman still has words for the Bridges group who are avoiding talking about Clinton.

“They’re entitled to their positions, and I have nothing but good things to say about them, but I would respectfully disagree [about] the top of the ticket,” Fetterman says. “This really is a crossroads of this country.”

While Ussery is not excited, she’ll cast her vote for Clinton. Meanwhile, Austin sat on a panel to discuss national security and veterans’ issues with Clinton’s foreign-policy adviser.

Some Bridges members say they’ll vote for the Green Party’s Jill Stein. But Austin and Ussery say that working for the current ticket top-down is worth it, to use the candidates they have to lay the groundwork for ensuring their issues will be front-and-center in upcoming Democratic contests.

“We’re already looking ahead to how many people are going to be up for election,” says Austin. “Who’s going to be running against bad politicians?”

Ussery adds: “The reason we’re building this movement is because I want this to be the last time that I have to vote against somebody instead of for somebody.”