Where's My Roy Cohn? is an interesting, but incomplete documentary about a despicable person | Film | Pittsburgh | Pittsburgh City Paper

Where's My Roy Cohn? is an interesting, but incomplete documentary about a despicable person 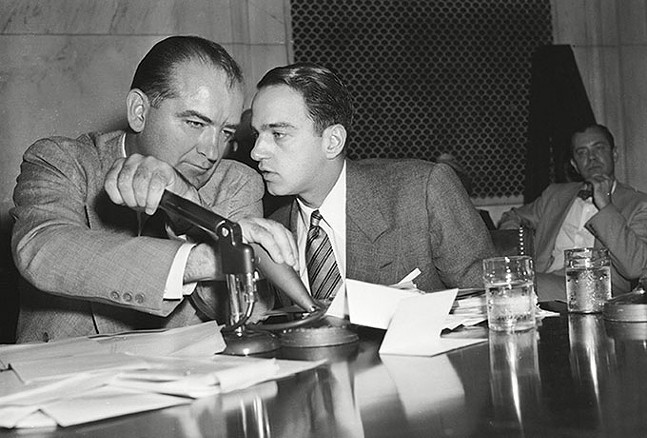 It can be comforting to ascribe as much of the world's evils as possible to one man. It allows others to feel less complicit and focus their anger on a single villain. In the wake of the 2016 election, there has been a slew of films in this fashion that attempt to understand how we got here, like Get Me Roger Stone, about the controversial conservative political consultant. The documentary Where's My Roy Cohn? lays out the various evils infamous lawyer Roy Cohn enacted throughout his career, and the people he influenced, including Donald Trump. But the movie, directed by Matt Tyrnauer, gets lost in the excitement over the monstrosity of its subject.

Roy Cohn was born in 1927 into a well-connected Jewish family in New York. His father was a judge and his mother was, as one cousin in the film describes, ugly with a difficult personality. According to several family members, the relationship between Roy's parents was arranged because no one wanted to marry his mother Dora, and when Cohn was born, his mother was disappointed that he was ugly like her. This apparently influenced much of Cohn's persona, which involved rebelling against his Jewish background and aggressively concealing his gay identity.

Cohn graduated law school at 20 and quickly rose in the ranks, first playing a prominent role in the conviction and Julius and Ethel Rosenberg, and then serving as chief counsel to Joseph McCarthy during his anti-communist crusades, as well as the "lavender scare" campaign against LGBTQ employees of the federal government.

His career involved a number of despicable acts, including representing several noted mob families, getting John Gotti off a first-degree murder charge, helping Ronald Reagan become president, and taking on Trump's 1973 fair housing case that alleged discrimination against Black residents. Everyone in the documentary describes Cohn as an aggressive lawyer who cared only about winning, not about the law (he was eventually disbarred for defrauding his clients).

Cohn's career is a trail of malicious behavior, some of which bled into his personal life. Director Tyrnauer seems to relish in presenting the contrast between Cohn's work and the realities of his life. He aggressively went after LGBTQ populations with McCarthy, but he brought boyfriends to parties. He denied repeated questions by reporters about his sexuality and completely denied having AIDS until his death from it in 1986. Most heinous of all, he received a rare and experimental AIDS treatment with the help of President Reagan, despite Reagan largely ignoring the AIDS crisis as president. The documentary doesn't exactly use Cohn's gayness as a punchline, but the drama of it all is certainly heightened for shock value. He was, evidently, a criminally bad person, but his lifelong shame about his sexuality was emblematic of that of so many others, and it feels cheap to try and derive a twisted pleasure from it as retribution for his actions.

Where's My Roy Cohn? presents all the evils enacted by Cohn, but doesn't know what to do once the facts are laid out. He was a slimy lawyer who represented terrible people and helped bring to power other slimy, terrible people. But what else? What are viewers supposed to do with this information once they've learned it? The documentary doesn't use these stories to ask interesting questions, or effectively tie it into present-day politics, except for in the film's title, which comes from a 2018 Trump quote when the president was trying to stop then-attorney general Jeff Sessions from recusing himself.

The movie can be riveting in its depictions of Cohn's schemes. It is indeed shocking that he was involved in so many critical points of American history, but ultimately, American history is filled with equally shocking and conniving people, and the problem is much bigger than any one of them.