Where to pick up some of Pittsburgh's best fresh-baked bread, from baguettes to challah to sourdough | Food | Pittsburgh | Pittsburgh City Paper 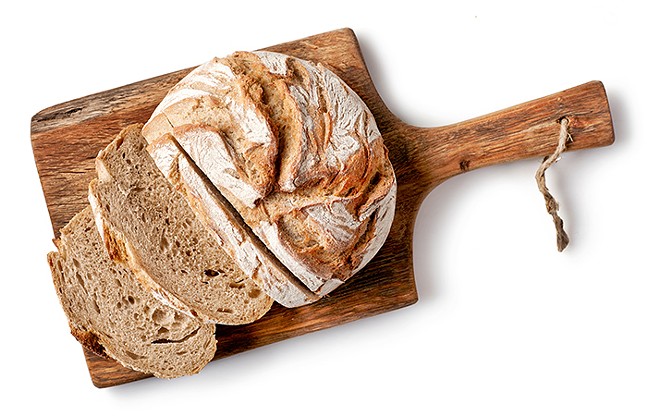 Anyone who's lived in Pittsburgh longer than a week knows the city specializes in french fries, both on salads and on sandwiches. But the city deserves as much praise for another delicious carb: bread. All across the city are bakeries and bread makers that craft loaves, rolls, and other glutenous foods that deserve just as much praise as anything else in Pittsburgh's food scene. Here are six great spots for some next level, and freshly baked, bread.

3615 Butler St., Lawrenceville. driftwoodoven.com
While they are best known for their pizza, Driftwood Oven also has a robust supply of delicious, crusty bread loaves, which makes sense considering they're known for their sourdough crust. Driftwood has individual loaves for sale, as well as a Bread Share program, which functions like a CSA with a new mystery bread loaf available for pickup every week, ranging from mixed herb to cinnamon raisin, to simply country loaves. Speaking from experience, it's a great treat to receive as a gift.

430 Beaver St., Sewickley.
292 Beverly Road, Mt. Lebanon. mediterrabakehouse.com
The breads at Mediterra Bake House are made using levain, a type of sourdough starter. The Sewickley-based bakery makes artisanal loaves that are just as good to eat as they are too look at. With varieties from basic multigrain loaves, to more unique flavors like parmesan peppercorn and chili cheddar. While Mediterra's baked goods can be found all across the country — they have a location in Arizona — locally their bread can be found at their cafes in Sewickley and Mt. Lebanon, as well as the East End Food Co-Op, Market Street Grocery, and more locations (visit their website for a full list).

2110 Brighton Road., North Side. breadworkspgh.com
Many bakeries on this list are relatively new to breadmaking, in the scheme of things. But BreadWorks has been churning out baked goods for over 40 years, serving both wholesale and individual customers. BreadWorks dozens of types of breads, largely falling under sandwich bread dinner rolls, or deli breads categories, but they also have specialty loaves based on certain holidays, like Irish soda bread for St. Patrick's Day. Their baked goods can be found at dozens of grocery stores and shops around the city (click here for the full list).

2034 Murray Ave., Squirrel Hill. toasttab.com/allegro-hearth-bakery
Scrolling through Allegro Hearth Bakery's Instagram page is a continuous stream of mouth-watering breads, sandwiches, and pastries. The Squirrel Hill bakery, which specializes in vegan baked goods (even the croissants), has a menu that includes classics like sourdough focaccia, kalamata olive bread, and traditional challah. They also have some unique treats like a "cuffin," which is a croissant baked in a muffin tin.

6524 Wilkins Ave., Squirrel Hill. fivepointsartisanbakeshop.com
"With bread, more time equals more flavor," states Five Points Bake Shop's website, noting that they start all breads at least 20 hours before they're baked. Five Points bakes sourdough, challah, baguettes, and rye bread, with flavor varieties for each kind. But they also have flaky pastries, like croissants which, like any great bakery, come in both sweet (chocolate) and savory (ham and cheese).

Multiple locations. lagourmandinebakery.com
If there's one place to get a French baguette, it's La Gourmandine, which is owned by French bakers. In addition to traditional baguettes, La Gourmandine has baguettes aux lardons (with cheese and bacon), pain de mie (a soft sandwich bread), and sourdough loaves. The best use of their baguettes might be in one of their sandwiches, like Le Montagnard, which features a heavy dose of butter, prosciutto, and cornichon pickles.