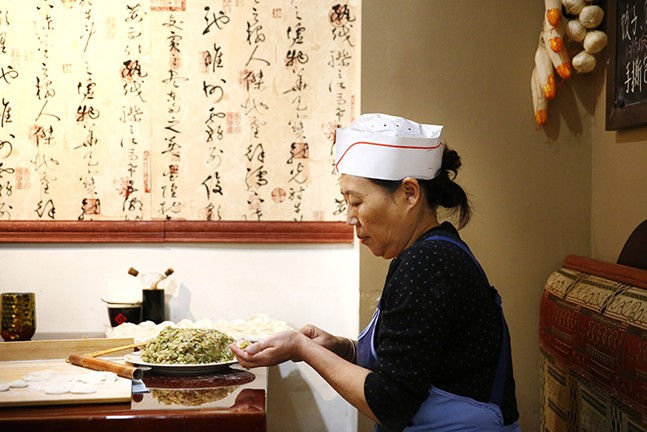 Lunar New Year — widely referred to as Chinese New Year, though many other Asian countries honor it — is the most important and celebrated holiday of the year for cultures rooted in a lunar calendar.

The festival is a spectacle that Marian Lien, president of the Organization for Chinese Americans Pittsburgh, can only describe as “Christmas, Thanksgiving, and the Fourth of July” all wrapped into one. Celebrations last 15 days, from the first new moon to the first full. 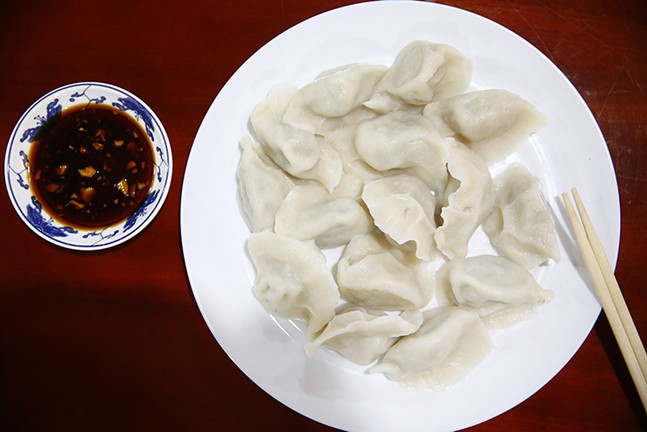 Food, unsurprisingly, is an integral part of the Lunar New Year tradition and is meant to bring blessings for the year to come. Everything eaten during the holiday, Lien explains, is symbolic, and often, the symbolism lies with a food’s phonetic meaning. “Chinese is a tonal language,” Lien explains via email. “So depending on where you put the emphasis of the syllable (or character), you can have two vastly different meanings.”

For example, dumplings are by no means a special-occasion food, but the name, jiǎo zi, sounds similar to the word for connection. It represents the linking of an old year to the new. And as an added blessing, the dumplings are shaped in the image of ancient currency — gold, shoe-shaped ingots — to bring prosperity as families welcome the new year together. 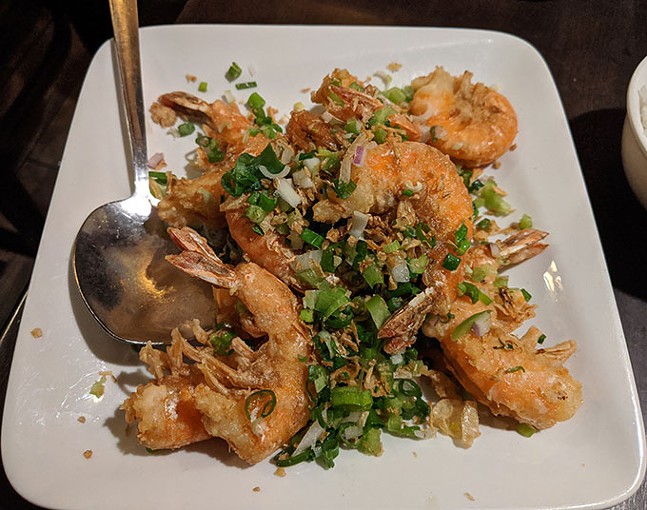 Whole fish, another common New Year’s dish, is significant for two reasons. Phonetically, the name refers to the concept of having more than enough. After China’s long history of famine, leftovers have become synonymous with wealth and not “living paycheck to paycheck.” And the cooking of the fish whole carries its own meaning. During the new year, harmony is found in completeness, whether that be from a round dining table or nose-to-tail cooking (or nose-to-fin in this case). Serving the animal whole symbolizes togetherness.

This concept carries over to noodles; long noodles are said to bless eaters with long life. “We would never dream of cutting a noodle,” explains Lien.

Pork is different. There is no symbolic meaning to its sound. Rather, the luck comes from the character. The written symbol depicts a home, wife, and husband with enough to eat, another blessing of prosperity to come.

Dried cantaloupe, coconut, lychee, and other sweet treats are customary ways families “wish you a sweet new year.” (Lien points out that Chinese sweets are tamer than what's common in the U.S. and that corn-syrup based candy has become a contemporary take on the ritual.) Pineapple cakes — the word for pineapple sounds similar to "plentiful" — are also popular as a piece of “sweetened luck.”All of these dishes come to play in one of the most observed rituals of Lunar New Year, a New Year’s Eve feast, or “reunion dinner.” Family members travel long distances to return home for the feast which marks the start of new year celebrations. 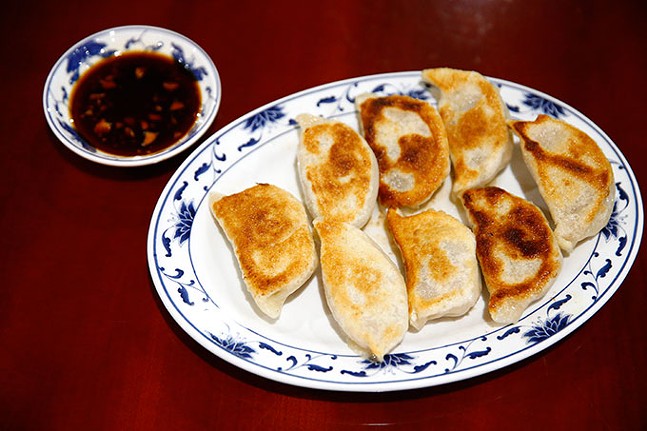 Five years ago, it was not easy to find these authentic, Lunar New Year dishes in Pittsburgh.

But today, Lien notes, there's a considerable demand for these traditions and Pittsburgh restaurants are delivering. A growing number of Chinese restaurants, most of which are located in Squirrel Hill, offer traditional Lunar New Year dishes year-round.

Lien directed me to Northeastern Kitchen, a hidden gem that was quite literally hidden in a basement on Forbes Ave., primarily for the dumplings, though the menu also has other New Year favorites like a specially-priced whole fish, steamed buns, and cold noodles.

Along with a garlic pork dish and a not New Year-related squid dish, I ordered two types of dumplings: steamed beef, and pork and Chinese cabbage.

Few meals rival anything I ate at Northeastern Kitchen that night, and the dumplings were above and beyond. Flavors were balanced and simple, basic enough to be an everyday dish while maintaining the “wow” factor expected from a banquet-style, “eat until your belly pops,” as Lien calls it, meal. Both plates of dumplings were paired with a strong garlic sauce, enough to give the lighter pork dumplings a zing of flavor but not overwhelm the heavier, earthy beef. 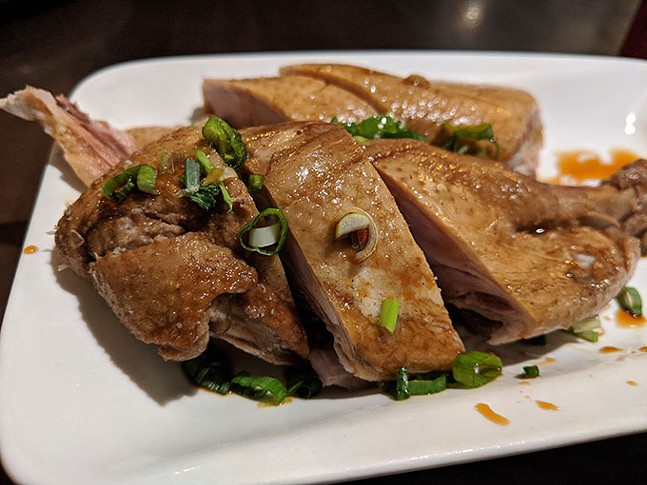 I walked a few blocks down Forbes Avenue to Taiwanese Bistro Café 33 to try salt and pepper shrimp, a dish meant to bring blessings of happiness and joy. (Phonetically, shrimp is similar to the sound of laughter.)

The shrimp were served fried (Lien encouraged me to find shrimp with the heads on, but Café 33 serves the dish with just legs and shell) and topped with chives and garlic. Everything, shell and all, was meant to be eaten. The shell, I was informed, held all the flavor and that turned out to be undeniably true. The simple saltiness worked on different levels through the dish, making for incredible flavor.

I was also able to find duck — something Lien notes is very rare and often requires a phone call to the restaurant to ensure they carry it — at Café 33. It was served cold, which allowed the spices to shine. The small breast was incredible, packed with more flavor than seemed possible.

In the kitchen with Guoqing Wu at Northeastern Kitchen 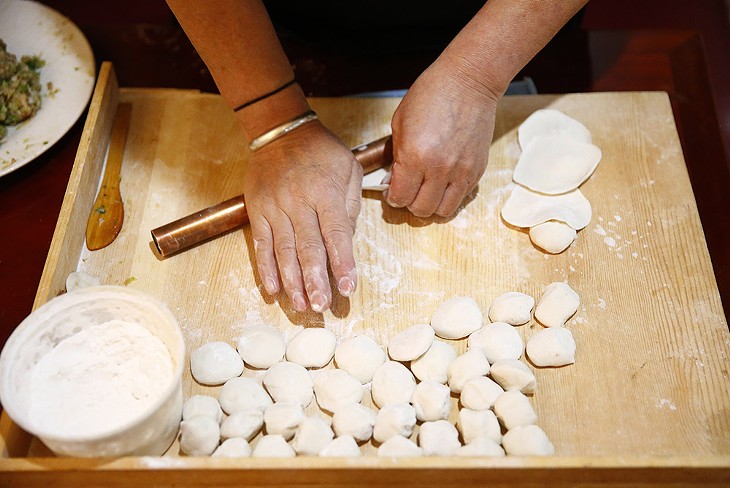 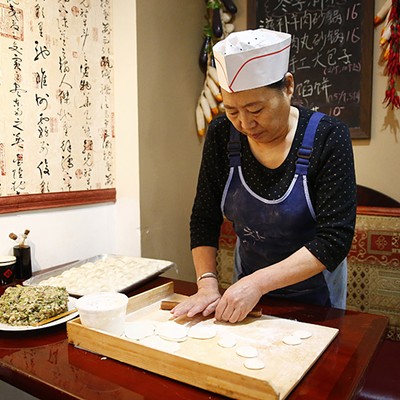 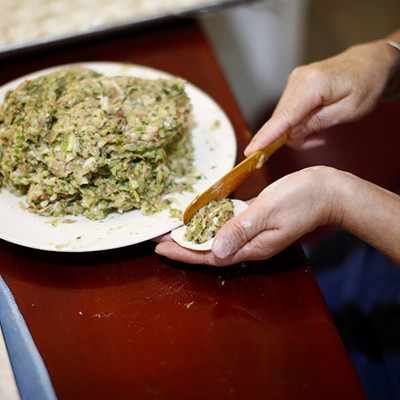 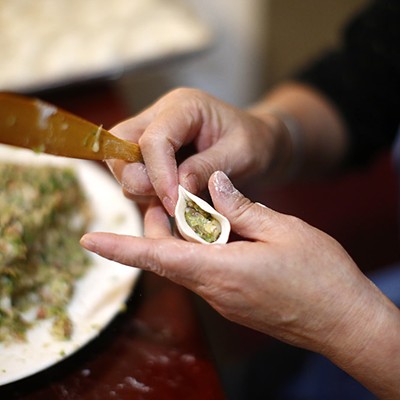 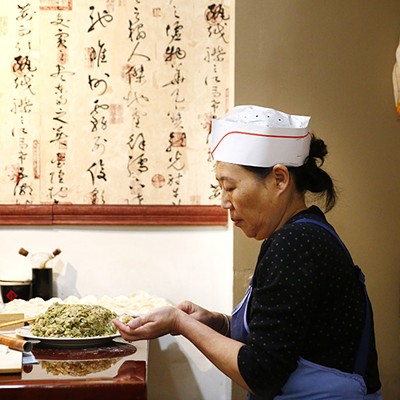 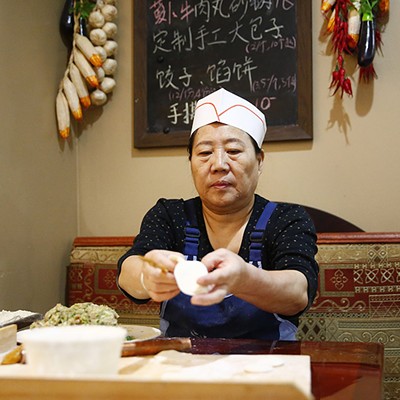 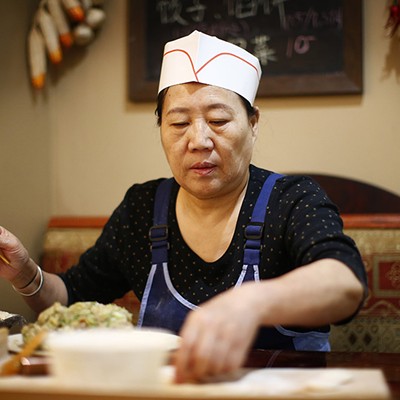 This year, Lunar New Year falls on Sat., Jan. 25. If you’re looking for a place to celebrate authentically, Northeastern Kitchen and Taiwanese Bistro Café 33 aren’t the only options. Here are some other restaurants, as recommended by Lien and the PennsylvAsia blog: