Where is Pittsburgh’s population growth occurring and who is driving it? 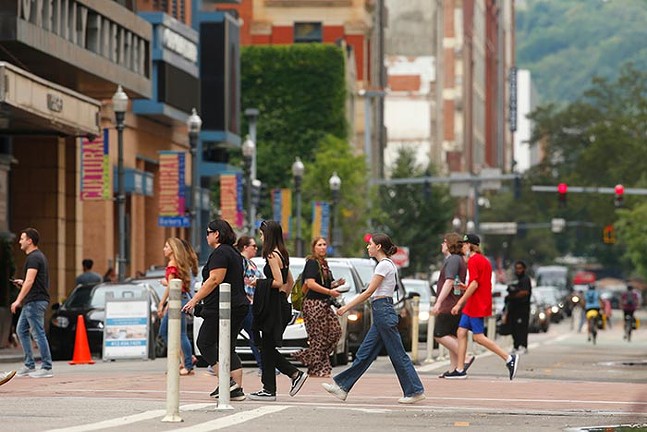 CP Photo: Jared Wickerham
People walk through Downtown Pittsburgh on Thu., Aug. 18.
When the decennial census was released on Aug. 12, the figures showed Allegheny County grew in population for the first time since 1960. The growth wasn’t that substantial, just a 2.2% increase, but it still was a milestone. Allegheny County added 27,230 residents compared to ten years ago, and the population of Pennsylvania's second largest county now stands at 1,250,578. The county’s census count outperformed its estimates by 3%, one of the largest overperformances in America.

In addition to that growth, Allegheny County and the Pittsburgh region also added more non-white residents. The county saw significant jumps in its Latino and Asian populations, adding more than 15,000 Latino residents and more than 24,000 Asian residents. The county is still overwhelmingly white, but 2020 is likely the least white the county has been in modern history. In 2010, Allegheny County was 81% white, but in 2020, it was 75% white.

But the census wasn’t all positive in terms of growth in Pittsburgh. The Black population in the city of Pittsburgh dropped more than any other race, percentage wise. The city lost 10,660 Black people, dropping more than 13 percentage points compared to 2010. Overall, the county’s Black population remained relatively flat, with just a 1.1% increase and about 1,800 additional Black residents. This suggests that suburban Allegheny County saw a large increase in Black population, even as the city’s population fell.

While the census highlights many aspects of the Pittsburgh region people have been discussing for several years, it also contains some surprises. Even so, it solidifies the notion that Pittsburgh is growing, just not everywhere, and not for everyone.

But outside the city of Pittsburgh, Allegheny County saw some relatively large increases and grew 3.3% from 2010 to 2020. Suburban Allegheny County added nearly 30,000 additional residents compared to a decade ago.

A lot of the growth was concentrated in Pittsburgh’s North Hills. Pine Township added nearly 3,200 new residents and grew by nearly 28%. Just over the border in Butler County, both Cranberry and Adams Township grew significantly, too. (Cranberry added nearly 5,000 residents, the highest volume gain of any municipality in the Pittsburgh region.)

The census confirmed what many have already been discussing: the city of Pittsburgh shed a large number of Black residents. The Black decline in Pittsburgh was more than twice as fast as the city’s white decline, one of just a handful of Allegheny County municipalities where Black decline outpaced white decline.

However, Black people are not fleeing the region as a whole, as many have suggested. Allegheny County’s Black population grew slightly, and grew significantly (15%) if you only count municipalities outside the city. The suburbs added 12,477 Black residents, even as they lost more than 39,000 white residents.

But it’s unclear exactly what drove Black people to Allegheny County’s suburbs. Some well-off suburbs — like Oakmont and Kennedy Township — more than doubled their Black populations, and North Hills suburbs Pine and Marshall also saw jumps in Black population. However, many boroughs that are struggling economically — like Glassport, Pitcairn, and East McKeesport — also saw huge increases in their Black populations with each small borough adding hundreds of Black residents over the last decade, suggesting they were forced out of previously affordable city neighborhoods into cheap housing that is more widely available in these struggling boroughs.

Another factor also may be complicating how Black displacement is viewed is Pittsburgh. The 2020 Census saw a huge increase in people identifying themselves as multiracial, as opposed to one race. Americans identifying as multiracial increased 276% in 2020 compared to 2010. And Pittsburgh likely saw some of that, too. The multiracial population in the city of Pittsburgh added more than 10,000 people.

Though more than 10,000 people identifying as Black alone shrunk in city limits, Pittsburgh added 2,646 people who identified as Black in combination with one other race.