Wheelfish, in the North Hills, promises “blues, bourbon and BBQ”

Of all the barbecue we ordered, smoked eggplant was the best 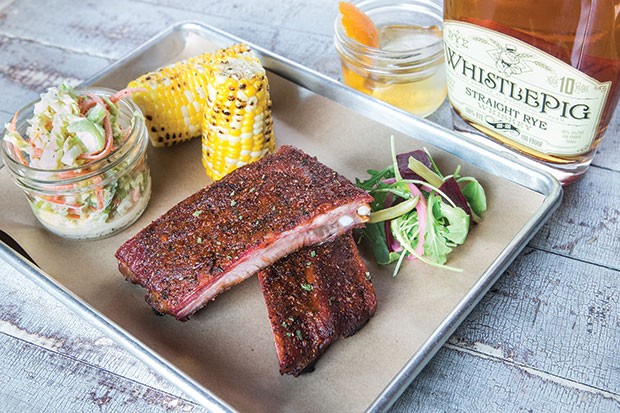 “Blues. Bourbon. BBQ.” is the motto of Wheelfish in Ross Township. Many have pursued the smoky pleasures of this alliterative trio in locales far more hardscrabble than Pittsburgh’s near North Hills, but we’re open to finding magic in unexpected places.

So it was with big appetites and open minds that we drove past tidy suburban houses on rolling green lawns to pull into the gravel parking lot of Wheelfish’s rustic building. Wagon wheels leaned against the unpainted board-and-batten walls, as if a hard day of eking a living off the land was just giving way to the tub-thumping pleasures of a country evening.

Inside, a stage was set up at one end of the dining room, with sound equipment ready to go, but on a Tuesday, a left-behind playlist provided the only blues in evidence. The stage and rough-hewn ambience of Wheelfish’s barn-wood interior actually date to its predecessor, Frank N Stein’s, but suit the current concept to a T. The rusticity felt more like an identity than a pose; it didn’t need to be propped up with blues posters on the wall or clever names on the menu.

The menu hit a sweet spot: The barbecue framework was classic, the details fresh. Alongside pulled-pork nachos and wings, for instance, were brisket quesadilla and roasted-beet salad. Standard smoked meats were augmented by salmon and smoked eggplant options. Sides included mac-and-cheese and pork and beans, but also napa cabbage slaw.

The quesadilla was fantastic. It started with a perfectly flaky-crisp tortilla and incorporated a filling that had a lot going on — meat, peppers sweet and hot, onion, cheddar and BBQ sauce — but still let that excellent tortilla share the spotlight. The sauce flavored the fillings without drowning them, and the meat, while in bite-size pieces, was substantial enough to make its quality clear, complete with luscious fat cap.

The best part of the beet salad was the citrus vinaigrette, bright and lightly acidic to balance the sweet components of beets, golden raisins and candied pecans, without tipping over into puckery sourness. Meanwhile, the greens were spicy enough, and sheep’s-milk feta briny enough, to offset the cumulative effect of three sweet ingredients. Our only complaint was a surprisingly scant portion of actual beets.

We really liked Wheelfish’s approach to chicken. Flash-frying the smoked bird created a light, crispy shell that didn’t distract from the meat’s flavor with a heavily seasoned coating. The leg was, for the most part, succulent, but a few bites were dried out, a surprising feat with dark meat. Sadly, this was a harbinger of things to come.

We started in on the small end of our half-rack of ribs, pulling off the last bone to reveal plenty of gorgeous, pink flesh. But a mouthful quickly revealed that looks were deceiving: The meat was tough, dry and over-seasoned. A second, smaller bite was more manageable, but still not right. A sample from the other end, the center of the original rack, nailed the texture — moist, tender, still with some chew — but the saltiness remained a problem.

Salmon, in sandwich form, suffered from a different kind of overcooking: While the meat was flaky and juicy throughout, there was an undeniable fishiness to it, reminiscent of canned tuna or reheated fish. It was a shame, especially because the other sandwich components — ciabatta roll, arugula, feta and aioli — came together wonderfully to create a combination that could have been a standout.

Of all the barbecue we ordered, smoked eggplant was the best: toothsome and meaty, not at all rubbery as poorly cooked eggplant can be; deeply infused with smoky flavor; and sauced with an astringent tomato ragout. Most of our sides were great, too. Pork and beans were close to perfect, with plenty of good meat and scarcely a hint of sugar among the mixed beans, while mac-and-cheese, topped with toasted breadcrumbs, was creamy and simple. Wheelfish switches up its cornbread seasonally, and blueberry was the perfect accent for high summer, the sweet-tart berries popping juicily in the bread’s pleasantly gritty crumb. But fries were disappointing: A heap of what looked like beautiful, deep-brown russets proved dry and tough, again as if reheated or held under heat too long.

Lots of places offer regional barbecue sauces these days, but Wheelfish sticks to variations on a classic theme: Blue Collar (regular), Gentleman (sweet), and Cowboy (spicy) sauces. All were well balanced between tomato and vinegar, smoke and pepper.

Like the sauces themselves, many of Wheelfish’s preparations were solid. But for a restaurant that puts barbecue front and center, its smoked-meat game was surprisingly uneven.