The events of 2021 have, justifiably, left many looking to the New Year with dread. What new COVID-19 variants, political stalemates, and natural disasters will 2022 bring? How could anyone toast at the stroke of midnight knowing that we’re still in the midst of a global pandemic and your dad still refuses to get vaccinated?

But here’s the thing — time waits for no one, and 2022 is here whether we like it or not. The good news is that the upcoming year will see a ton of positive things happening in Pittsburgh, from a historic new mayor to a new museum to the return of old favorites.

First, Pittsburgh gets its first Black mayor to lead the city, and many voters are excited to see what he has in store, especially since he has already begun to fill his administration with progressive staff members.

In terms of development, Downtown Pittsburgh will see the opening of a new department store, bringing some much-needed, affordable retail to the neighborhood. In Uptown, a new shelter will welcome pets along with owners facing housing insecurity, a first for the region.

Mostly, the year will see the return of many old favorites, including a retired ride at Kennywood and a beloved Bloomfield bar thought to be lost to the pandemic. Plus, the furries are coming back.

These are just a few things we at Pittsburgh City Paper are hoping to see unfold in the coming months. Read on for more, and get ready to pop that champagne and wish everyone a cautiously optimistic “Happy New Year!” 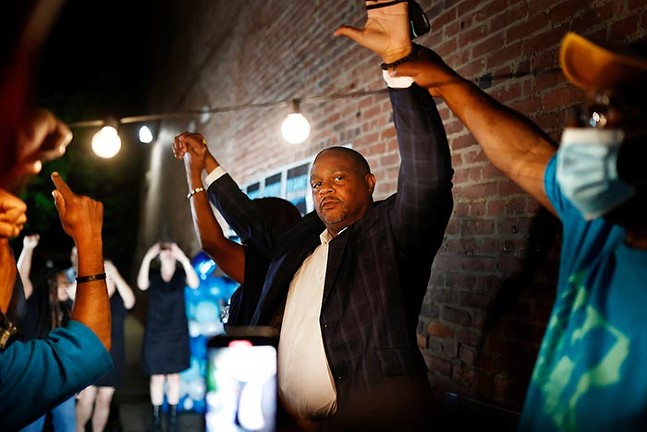 CP Photo: Jared Wickerham
Pittsburgh Mayor Ed Gainey
1. Pittsburgh welcomes its first Black mayor
Pittsburgh history was made at the beginning of 2022. When Ed Gainey took office on Jan. 3, he became the first Black mayor to ever serve in the city of Pittsburgh. That history-making event also comes with a change in priorities this year, and Pittsburghers should expect Gainey to push for a citywide housing policy requiring new, large developments to create a percentage of permanently affordable units, policies to address racial inequities in the city, additional focus on removing lead pipes and lead paint mitigation, and possibly challenging the nonprofit status of some city giants like UPMC.

CP Photo: Mike Schwarz
Furries at Anthrocon in Downtown Pittsburgh
2. Lions and tigers and fursuits, oh my!
The pandemic has taken away many things from Downtown Pittsburgh, but maybe none as noticeable as the loss of furries and their annual Anthrocon convention. Well, 2022 is looking up again, as Anthrocon is set to return to the David L. Lawrence Convention Center this summer. The convention is scheduled for June 30-July 3, and hopefully it will renew Pittsburgh’s furry tradition. As Anthrocon CEO Sam Conway told Pittsburgh City Paper in 2019, furries consider themselves Pittsburghers and added: “As long as I am chairman, wild horses couldn't drag us away, and I know because we have wild horses.”

Photo: Courtesy of Astrobotic
A rendering of the Moonshot Museum
3. To the moon, Pittsburgh!
Pittsburgh boasts a healthy number of museums dedicated to art, natural history, science, and more. And in summer 2022, the city will welcome an exciting new addition. The Moonshot Museum promises to be the first museum in Pennsylvania to focus “exclusively on space exploration, the Moon, and space industry career readiness for young people.” Set to open in the North Side-based headquarters for the space robotics company, Astrobotic, the museum will immerse guests in “lunar-inspired” environments and allow them to see the construction of actual spacecraft. There will also be simulated missions to the Moon and other features sure to inspire visitors of all ages. 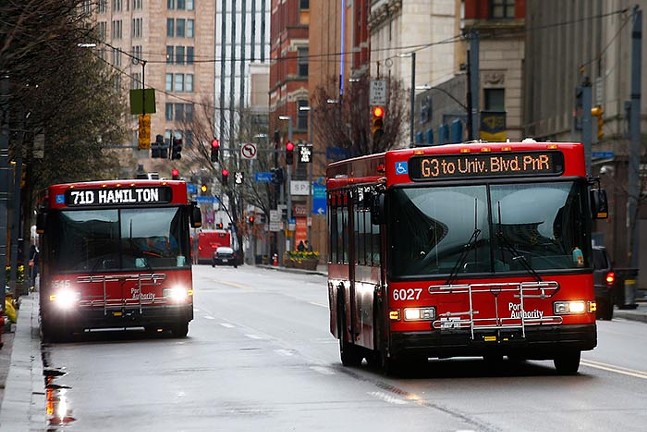 CP Photo: Jared Wickerham
4. Port Authority now providing free transfers
For people in Allegheny County who ride transit for the longest distances — aka those who rely on public transit the most — fares have been among the most expensive in the country. A base fare plus a transfer have cost $3.50 up until the end of 2021. But 2022 has some relief for those transit users, most of whom are lower-income. Transfers are now free within a three-hour window when using ConnectCards. In addition to free transfers, single-base fares using ConnectCards are also increasing from $2.50 to $2.75, which now matches what cash fare costs.

Photo: Courtesy of Pittsburgh Cultural Trust
The cast of Hamilton
5. Pittsburgh repeats history with Hamilton
Musicals took a break when COVID-19 shut Pittsburgh stages down. Now live shows are back — with safety precautions, of course — and theater nerds are ready for the triumphant return of Hamilton, which hasn’t been performed in the Benedum Center since January 2019. The touring production, playing Feb. 22-March 13, takes Lin-Manuel Miranda’s hit Broadway musical on the road, giving Pittsburgh audiences a chance to experience a twist on the story of American founding father Alexander Hamilton. Tickets are on sale now, so make sure to snag a few and get ready to sing along to all your favorite hip-hop influenced tunes.