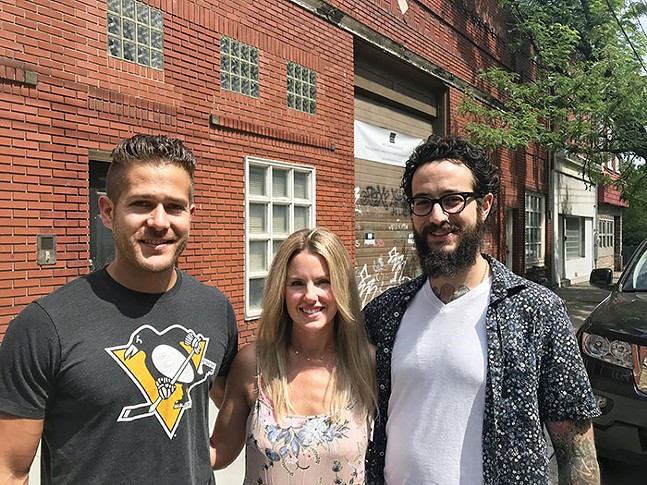 CP Photo: Ryan Deto
Brett Minarik, Phoebe Fraser, and Adam Harvey, owners of the proposed Lawrence Hall
Since 2017, three Lawrenceville residents have had a dream to bring a food hall to Butler Street. It would host five different food stalls, and convert an abandoned warehouse right in the heart of Lawrenceville’s business district. It would be called Lawrence Hall.

Adam Harvey, one of the residents behind Lawrence Hall, believes the food hall will fit in well in the neighborhood because it would give smaller restaurateurs opportunities in a Butler Street market dominated by popular, large, and mostly sit-down restaurants.

“For this thriving commercial district, we are short on space,” says Harvey. “We hope small businesses come here to thrive, and a rising tide would lift all boats. We are interested in creating a footprint here that vibes with the neighborhood.”

But there is a problem. Pittsburgh zoning code requires buildings seeking zoning variances to provide a certain amount of off-street parking. After many different proposals, the three residents — Brett Minarik, Phoebe Fraser, and Harvey — have been able to provide seven surface parking spots and bike parking at a lot nearby, but it isn’t enough.

Zoning code requires a development of Lawrence Hall’s size to provide 11 off-street parking spots, and even though the Pittsburgh Zoning Board of Adjustment granted the food hall a variance lowering the parking requirements, that decision was appealed by another Lawrenceville resident and notorious citizen activist, and the judge ruled the zoning variance was improper.

Basically, the only thing standing in the way of Lawrence Hall becoming a reality is four off-street parking spaces.

Image: Moss Architects
A July 2018 architectural rending of Lawrence Hall’s exterior
Minarik, Fraser, and Harvey have the capital, and the experience in the hospitality industry. They are confident Lawrence Hall will be a success, but have grown frustrated at the stoppage. Even so, they have garnered considerable support to their side. Both neighborhood community groups — Lawrenceville United and Lawrenceville Corporation — have rallied to Lawrence Hall’s cause, and are lauding the three residents for their commitment to working with the community and responding to the many residents’ needs. Minarik says Lawrence Hall has also received support from the administration of Pittsburgh Mayor Bill Peduto, who has been involved with helping the team file appeals in court over the development. They even proposed an alternative-transit plan for Lawrence Hall, which would have been pioneering in the Pittsburgh zoning world, had a judge not dismissed it.

But experience and desire, as well as community and governmental support, doesn’t mean much when it comes to zoning decisions. And, in this case, just one person opposed to the project can stall it for years, even over just four off-street parking spaces.

“Parking is a concern for everyone. We don’t take that lightly,” says Minarik. “Everything is positive about this project, but it’s four parking spaces.”

Minarik and Fraser, who are married, moved to Lawrenceville in 2017. Soon after, the couple became interested in the property on 4609 Butler St., saw a for sale sign, and started to think about its potential as a food hall. Not long after that, they met Harvey, who had extensive experience in the restaurant and hospitality industry. They all realized Pittsburgh is short on food halls compared to other cities, and thought the large property on Butler Street was perfect for their concept.

First built in 1890, the property at 4609 Butler St. has had several uses over the years. Minarik says at one point it was a theater, then it became an auto shop in the 1940s, and then, after being utilized for a construction business, it eventually was used for storage. For years it has stood vacant. Inside, the ceilings are over two dozen feet high, and it boasts about 6,000 square feet of space.

CP Photo: Jared Wickerham
An old advertisement from Lawrence Park Garage, one of the original owners, found inside of Lawrence Hall
Minarik says they want to preserve the original structure as much as possible, and would build skylights to add in natural light. The plans are for five vendor stalls inside the space that would accommodate seating and room for about 130 people. The hall will also include a 26-seat bar, serving beer, wine, and cocktails.

In 2018, the residents’ plan was approved and granted a zoning variance by Pittsburgh’s Zoning Board of Adjustment. But in October of that year, Raymond Czachowski and Eric Kukura appealed the zoning board’s decision. Kukura is co-owner of The Abbey, a large restaurant, bar, and cafe space located very close to 4609 Butler St. Czachowski is a longtime Lawrenceville resident and property manager.

A judge ruled in favor of Czachowski and Kukura, and overturned the zoning board’s decision in June 2019. Minarik, Fraser, and Harvey went back to the drawing board, and came back with an adjusted plan meant to meet the appeal to the judge’s ruling.

“We had reduced the scope of our buildout, purchased the only available lot in the area that could provide some parking, and restructured our project and zoning package to significantly reduce what we were asking the ZBA to approve,” reads the Lawrence Hall website.

After this adjusted plan, Kukura didn’t showcase public opposition, but Czachowski did speak out at the zoning board hearing in February 2020. When the zoning board again approved the variance for Lawrence Hall, Czachowski filed another appeal to the courts.

According to the residents, they started to negotiate possible solutions with Czachowski. These included bringing valet-style parking to a small lot they purchased on the corner of Butler and Plummer streets. The residents also tried to get permission to park cars at the nearby lots of Busy Beaver hardware store and the Boys and Girls Club, but those were non-starters, legally speaking.

According to the Lawrence Hall website, Czachowski then “moved the goalposts” and said that valet-parking must be undertaken at the Lawrence Hall entrance (not the satellite parking lot), which community groups strongly opposed.

CP Photo: Jared Wickerham
A sign posted on the exterior of Lawrence Hall
Instead, the residents worked with the community groups to create an alternative transit plan to mitigate any possible traffic concerns. These included permanent discounts for customers who rode bikes or used ride-hail services to visit Lawrence Hall, commitments to prioritize hiring employees who could walk to work, and paying public transit costs for all of Lawrence Hall employees. This alternative transit plan mirrored workforce plans that are generally lauded by environmentalists and transit advocates.

But in November 2020, a judge ruled against the zoning board again, and called Lawrence Hall’s alternative-transit plan “aspirational in nature” and said it is “impossible to quantify how many employees are walking, taking the bus, biking, or using a rideshare program to get to work.” (The American Community Survey estimates how many people commute to work using various methods — like walking, public transit, bike, driving, and taxi — every year and publishes the data on the U.S. Census website.)

Fraser adds that the way the judge ruled against Lawrence Hall could even set a precedent against other developers who may want to institute alternative parking plans as a way to limit off-street parking requirements.

“We are being stymied by four parking spaces.”

Harvey says it doesn’t make sense that the Lawrence Hall development is being blocked because if he, Minarik, and Fraser were to purchase a large restaurant space on Butler Street, and not change the use of the building, they wouldn’t have to supply off-street parking spaces. According to Lawrence Hall’s website, if instead of one 6,000-square-foot space, they had three 2,000-square-foot spaces — even containing the same number of businesses, customers, employees, etc. — no parking would be required.

“We are being stymied by four parking spaces,” says Harvey.

The man behind the challenges and successful appeals, Czachowski, has a long record of opposing development projects, including apartment buildings and converting out-of-use churches. By many accounts, he’s known throughout Lawrenceville as a NIMBY, a term that means “Not In My Backyard” and is generally applied to citizen activists that oppose development of neighborhoods, whether that is housing, business, or transit.

In 2012, Czachowski spoke out against a proposed redevelopment of the Holy Family School, a church and rectory, into market-rate apartments. That proposal, now scrapped, included 57 apartment units and 88 parking spaces, which is well above zoning requirements. According to the Pittsburgh Post-Gazette, Czachowski said in 2021 that he will fight the development in zoning on the basis of the "intensity of the residential part. It's too many units."

Czachowski did not respond to multiple requests for comment for this story.

Minarik is from Cleveland, Fraser is from Southern California, and Harvey is from New York, but all have made Lawrenceville their home. All told, Minarik says the group has spent hundreds of thousands of dollars in legal and consultant fees alone trying to get Lawrence Hall through a zoning change. This is separate from the money it would cost to renovate and run the facility.

CP Photo: Jared Wickerham
The interior of Lawrence Hall
“I’ve dealt with Brooklyn and Manhattan zoning boards, and we have found a way to yes,” says Harvey. “But this is crushing. We explored every option, even excavating our site, and would still fall short [in terms of parking.]”

Lauren Byrne Connelly is the director of the community development group Lawrenceville Corporation. She says the Lawrence Hall owners worked through the group's community process and met with Lawrenceville residents multiple times to address concerns they had about the project. She says Lawrence Hall would be a good fit in the neighborhood's business district.

“These buildings have been vacant for years, and the reactivation of this part of the business corridor was exciting to us and to many others in the community,” says Connelly. “We have seen the food hall model work in other places, and we thought that this could be attractive to start-ups and entrepreneurs. It was already tough to bring a food concept into your own brick and mortar retail location before COVID and that has only become more challenging since, and especially in a real estate market like Lawrenceville.”

Connelly also lauded the residents for exploring the possibility of a workforce development partnership with the Boys and Girls Club, where youth and young adults could gain experience in managing a business. She says she is hopeful the struggles of Lawrence Hall will help motivate Pittsburgh zoning changes, especially ones that help encourage non-car mobility and creative parking solutions.

“What exists now is outdated and inconsistent, and doesn't contemplate 21st century mobility values, networks and uses,” says Connelly. “Additionally, there are seas of surface parking just behind where the [Lawrence Hall] is proposed that sit underutilized while others nearby can't identify parking solutions. Shared parking agreements and solutions are something we have been working to figure out and specifically those issues that property owners raise related to demand and liability.”

But parking requirements for commercial spaces haven’t been adjusted on a wide scale, and the zoning code as a whole hasn't been rewritten in decades.

Minarik says he has reached out to Pittsburgh city councilors for help, and adds that the “nicest thing we can say is they have been unresponsive.”