When we're hungry for a little slice of small-town America, we stroll along Allegheny River Boulevard in Oakmont. Its hardware stores, card shops, even an independent bookstore and movie theater, remind us that even as our Blackberries chirp and our cell phones peal, the mundane errands of daily life are interspersed with small pleasures. And if we're just plain hungry, Oakmont's main drag has plenty of restaurants, too. One in particular appears specifically set-designed to fit our nostalgic image: With its honey-colored wooden booths, gingham curtains, and décor centered on dried flowers and baskets, What's Cookin' at Casey's has always seemed to us an old-fashioned, all-American luncheonette.

We hasten to add that we formed that impression from the outside looking in. When we finally dined at Casey's, we discovered that it is neither a luncheonette -- it's open for dinner every night -- nor is it all-American: The Henry and Tolerico families, who run it, take great pride in their Italian heritage and family recipes.

Yet the atmosphere embraces the neighborhood more than the Old Country, with historic pictures of Oakmont on the walls and booths filled with families and regulars. And while the lengthy menu includes Italian specialties, to be sure, there is plenty else on offer, most of it in the realm of that particular brand of Pittsburgh comfort food epitomized by turkey Devonshire (more about that in a moment).

Instead of an appetizer -- Casey's selection in this department was heavy on the fried foods -- we started with a small pizza. The crust was substantial, soft and chewy, and blanketed with generous amounts of sauce and melted cheese. The cheese was deliciously browned on top and melded with the crust to form wonderfully crispy edges, but the sauce was dominated by notes of sugar and dried oregano. Garlic seasoning provided some balance, and a loaf of garlic bread served with our meal was excellent. (Later on, we peeked in the kitchen and spotted three foot-long loaves sliced, smeared with garlic butter, and awaiting a final crisp in the oven before serving: a glimpse of heaven, according to our tastes at least.)

For an entrée, Angelique indulged her taste for crab cake from the specials board. While the cakes included noticeable amounts of breadcrumbs and diced bell pepper as filler, the lumps of crab were large and succulent, adding up to serviceable, if not transcendent, cakes. It was the green beans served on the side that stole the show. At a more ostentatious establishment, they might have been called "baby green beans" or even haricots verts: slender as straws, bright green and cooked to their delicately tender peak.

A dining companion ordered the aforementioned Devonshire, and was confronted with an unappetizing mass of orange-yellow cheese that did not hint at origins in roux or cheddar. She also found the dish overly salty, and wished she had ordered something else.

One of the Italian specialties, perhaps. Some were unfamiliar to us, and we were not sure whether they were authentic dishes from the recipe box of Mum-Mum Tolerico or modern creations of chef Scott Sloan. No matter; Jason's fettuccine with steak was an unqualified success. Sliced steak -- remarkably tender for a thin cut -- rested atop pasta tossed with mushrooms and pine nuts, and lightly sauced with olive oil. The dish's unified flavor suggested that the steak was pan-seared and then the other ingredients sautéed in the pan.

One other impression gleaned from window-shopping proved true: Casey's is big on baked goods. We tried both chocolate-sundae cheesecake and all-American apple pie. The first was creamily, fudgily decadent, while the second, served cold but with an unusual and appealing streusel topping, would have been wonderful after a few minutes in the oven.

Now that we've tried it, we can attest that What's Cookin' at Casey's is as cute, casual and comfortable as its name. 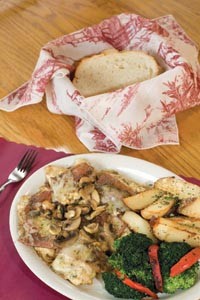