What’s behind those “unhealthy air quality” warnings in Pittsburgh?

The Pittsburgh region has experienced several inversions over the last several days, trapping industrial pollutants closer to the surface. 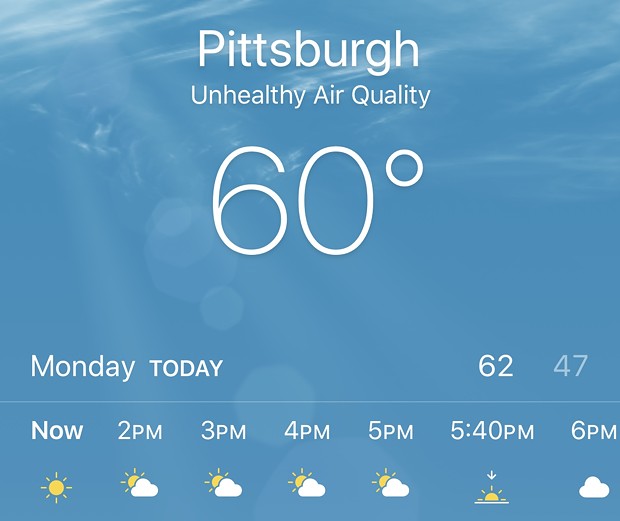 An unhealthy air-quality warning greeted many of their eyes that morning, especially if they checked the weather forecast on smartphones. In fact, a similar warning also was given earlier today.

Bill Modzelewski, a meteorologist at the Pittsburgh National Weather Service, says we have experienced several inversions over the last several days. Inversions are when a warm air mass sits above a colder air mass, trapping the colder air mass below.

“We we had pretty strong inversion this morning,” says Modzelewski.

And when those inversions trap pollutants released by area industrial facilities, like coal-fired power plants and coke works, Pittsburghers experience unhealthy air. As the Air Quality Index map shows below, the regions with the worst air quality during the inversions are around Clairton and the Ohio River Valley. 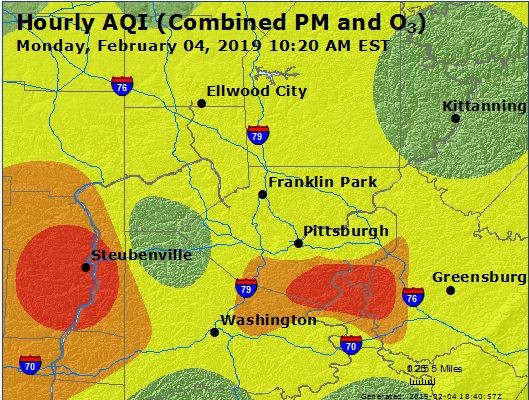 Screenshot from airnow.gov
Air Quality Index map of the Pittsburgh region taken at 10:20 a.m.
For periods of time this morning, air-quality measurements over those areas were showing pollutant levels between 150-200, which is unhealthy for everyone. And around noon today, those pollutant levels also appeared above parts of Pittsburgh, the South Hills, and the North Hills, showing levels between 101-150, which is unhealthy for sensitive groups.

Clairton is home to U.S. Steel’s Clairton Coke Works, a facility that manufactures coke, a coal byproduct used in steel production. The coke works has been criticized several times for contributing to poor air quality and was recently fined $1 million by the Allegheny County Health Department.

The Ohio River Valley, near Steubenville, Ohio is home to the W.H. Sammis coal-fired power plant and the Mountain State Carbon coke-producing facility.

Modzelewski says that only when the inversions dissipate, are the surface air, and its pollutants, released into the atmosphere.

He adds that inversions are typical for cold-climate regions like Pittsburgh. Modzelewski says they occur all throughout the year. In the winter, they typically happen as a warm front moves into the area, but there is still enough snowpack on the ground to keep the surface temperatures cooler. Inversions can also happen on clear and cool nights followed by warm days.

Modzelewski says inversions don’t really have any relationship to climate change. But a Utah study showed valleys in that state may be seeing an increase in inversions because, while valleys are staying cool, the air around and above them is warming up due to climate change.

One of the most famous inversions occurred in the Pittsburgh area, in Donora in 1948. An inversion called the Donora Smog lasted four days in the small Mon Valley Town. Pollutants from a zinc works and steel plant were trapped over the town, and about 70 people eventually died due to sickness caused by the pollutants.

Modzelewski says today’s inversion mostly dissipated by the afternoon thanks to the sunshine. (It appears the air quality warnings on Apple Weather apps stay around longer than they need to. Websites like airnow.gov provide more accurate and detailed maps of air quality.)

He advised people who are sensitive to air pollution take precautions and stay inside during inversions.