What’s a “naked ballot” and why it will lead to your Pa. mail-in ballot being rejected | News | Pittsburgh | Pittsburgh City Paper

CP photo: Abbie Adams
The secrecy envelope that Pennsylvania ballots must be placed in to avoid a naked ballot
Pennsylvania might have a very big problem with counting the upcoming election results, and it all could hinge on “naked ballots.”

The term “naked ballot” refers to a mail-in or absentee ballot that is returned without its secrecy envelope.

Considering that President Donald Trump won in 2016 by about 44,000 votes, the consequences of that many mail-in ballots being rejected could easily sway the Pennsylvania election, which has the ability to sway the election for the entire country.

So, Pittsburgh City Paper wants voters to be informed on “naked ballots” and secrecy envelopes. Also, if you want to learn more about the entire vote-by-mail process, see CP’s handy explainer on mail-in voting.

What exactly is a naked ballot?

A naked ballot is one that is returned to county election offices, but not inside the secrecy envelope. Mail-in ballots in Pennsylvania come with three components (as well as instructions). The ballot that you fill-out by selecting candidates, the secrecy envelope that you place your ballot in, and the declaration envelope which you will sign after placing your secrecy-envelope enclosed ballot.

The secrecy envelope (shown below) is the envelope that only has "Official Mail-in Ballot" written on the front. Fill out your ballot, fold it, and then enclose it in that secrecy envelope and seal it. Mailing the ballot "naked," aka outside of the secrecy envelope, but still within the declaration envelope means your vote will not count. 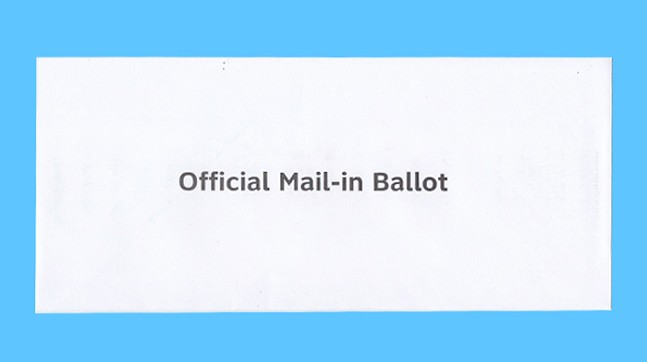 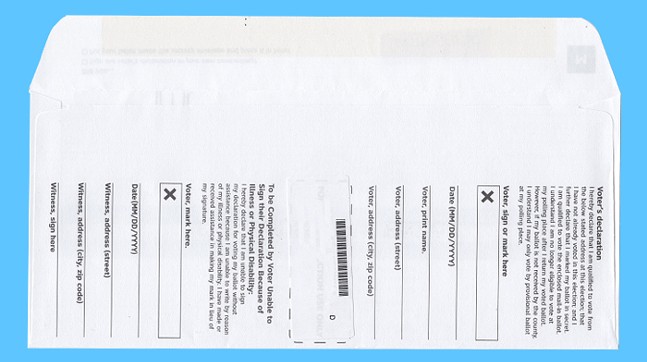 CP photo: Abbie Adams
The back of the declaration envelope, where voters sign before returning
Then return the whole package by mailing it to your county election office, which should already be listed on the front of the declaration envelope (shown below for Allegheny County). There is no need to put a postage stamp on the ballot, as Gov. Tom Wolf decided to have the commonwealth cover the costs as a way to increase mail-in voting accessability. 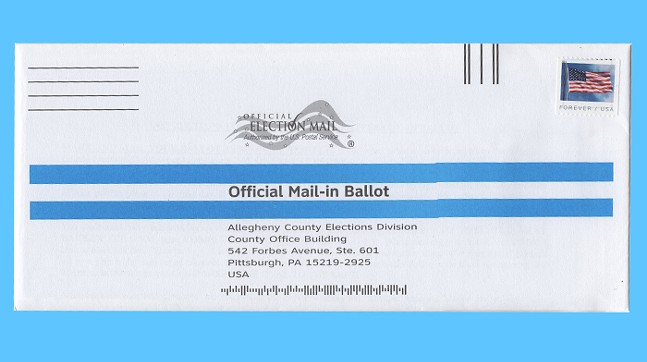 CP photo: Abbie Adams
The front of a declaration envelope for Allegheny County voters. Reminder, posted is already paid for in the general election; a stamp is not neccessary.
Voters can also return their mail-in ballot package in-person at their county election offices or temporary satellite offices. (The times and dates that Allegheny County’s temporary satellite offices are open is included in CP’s mail-in voting explainer.)

Pennsylvania counties are also allowed to drop-off mail-in and absentee ballots at official drop-off boxes. Locations for drop-off boxes have not been established, so stay tuned.

On Sept. 17, the Pennsylvania Supreme Court ruled that naked ballots for mail-in voting would be rejected outright for the general election. Voting advocates criticized that specific ruling, but here we are, and they have switched gears to try to inform as many voters as possible about the secrecy envelope requirement.

If a ballot is returned just in the declaration envelope, it won’t count. It’s that simple. Below is an example of a Democratic primary election ballot from Allegheny County. 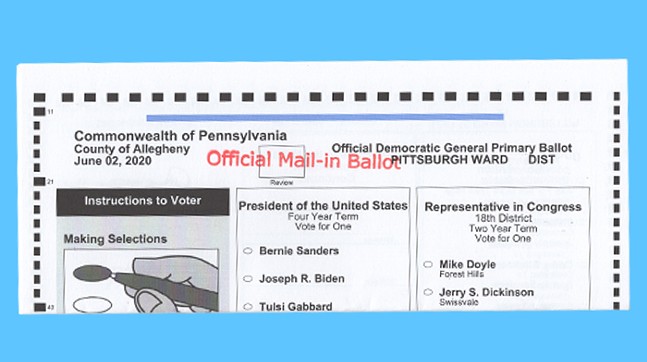 CP photo: Abbie Adams
A ballot from the Pennsylvania primary in Allegheny County
There are worries about many voters forgetting to place their ballots in the secrecy envelope, considering how many did so in the primary. But there also wasn’t a public campaign to remind people to avoid naked ballots. There have already been dozens of reports about naked ballots by Pennsylvania media companies, and some tweets, including one from WTAE’s David Kaplan, that have gone viral.

More than 100,000 votes being discounted would surely be a tragedy, and could lead to chaos in the weeks following Nov. 3. So tell your friends about naked ballots, and share this and other stories on social media. Let’s cover up those ballots!

Don't let your mail-in ballot go naked - use BOTH envelopes when you return your ballot!

If you want to vote by mail for the upcoming election, apply for a mail-in ballot NOW as https://t.co/mgnyWO27bh pic.twitter.com/e643P08HIB