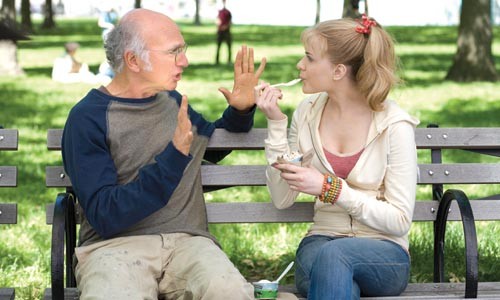 In his new movie, Whatever Works, Woody Allen finally admits what we've suspected all along: He has the answer to everything.

Of course, being a modest fellow, he doesn't tell us this himself. He leaves it to Boris Yellnikoff (Larry David), a physicist and self-proclaimed genius who waxes freely on the stupidity of everyone else on earth and the futility of it all. History's profound thinkers had great ideas about how people should live. They just didn't account for the banality, idiocy and selfishness of a species that doesn't possess the altruism necessary to do it.

So it makes no sense that when Melodie St. Ann Celestine (Evan Rachel Wood), a starving waif who's run away from her ultra-Christian Mississippi family, asks him for money outside his apartment, he quickly caves and invites her in. Apparently, young-and-blonde trumps bitter-and-misanthropic, especially when the writer/director is Woody Allen.

It was charming and fresh 30 years ago when Alvy Singer turned Annie Hall into an urbane New Yorker. It was also much more age-appropriate. But now Allen has spent the past decade or so justifying his subsequent personal life without daring to make an honest movie about older men and younger women.

This is the stuff of modern screwball comedy, lost in the insular world of an artist who's been repeating himself for decades. Allen's script has some funny lines, and Boris' misanthropy is always engaging. But Whatever Works is more concerned with ideological bludgeoning than with trivial things like character and story. When Boris accuses someone of having too much ego and no superego, he's talking about his creator, too. Coming from Allen, it's all a little creepy.

Whatever Works is nicely filmed around New York, with lots of busy scenes of everyday life. It's also nicely acted, especially by Wood and the luminous Clarkson. David, the caustic star of HBO's Curb Your Enthusiasm and the creator of Seinfeld, is credible when Boris directly addresses the camera (being so wise, he knows an audience is watching), and somewhat stilted when he steps back into character. You can hear every word he speaks coming from Allen, who would say them with curiosity and bemusement, not with anger and resentment, making David a rather miscast alter ego.

But it doesn't matter who says it. Boris is right when he laments that it's all meaningless. He's also right when he urges everyone to take whatever pleasure they can from whatever comes their way.