What will it take to defeat Mayor Peduto … if any legitimate candidate runs against him? | News | Pittsburgh | Pittsburgh City Paper

What will it take to defeat Mayor Peduto … if any legitimate candidate runs against him?

CP Illustration: Abbie Adams
Pittsburgh Mayor Bill Peduto has been under some serious heat this summer.

The Black Lives Matter protests that erupted in late May in Pittsburgh are still ongoing. During a handful of these demonstrations, Pittsburgh Police have used force against protesters, including employing less-lethal weapons like tear gas, sponge rounds, bean bags, and pepper spray. With many of these use-of-force incidents caught on camera, outrage grew as Peduto was quick to defend the police’s account of the events, even though videos contradicted what police claimed happened.

Contrast this to when Peduto sat in City Council in the early aughts, and when he first ran for mayor in 2013 and won. Many identified him as one of the more liberal mayors Pittsburgh had ever seen. He openly talked about police reform, climate change and environmentalism, and racial justice, and started to implement progressive urban policies like protected bike lanes.

So when Peduto repeated false claims that property damage during a May 30 protest was carried out by people from outside the region, and when he repeated the unverifiable claims that protesters threw projectiles at police first during a skirmish on June 1, many took that as a betrayal of the values for which he previously advocated.

Some protesters and Pittsburgh residents started to call for Peduto to resign. That pressure has continued throughout the summer, perhaps loudest on social media, although that has spilled over in recent weeks as protesters began showing up in front of Peduto's house in Point Breeze. An Aug. 19 protest that began outside Peduto's house, and ended in nearby Mellon park with police employing projectiles and chemical spray on protesters, led to the mayor announcing changes to how police respond to protests.

On Aug. 25, Peduto told WESA that he "absolutely" will be running for a third term next year. Last week, he even rolled out the beginnings of a comprehensive land-use plan, which would be the city’s first.

There does appear to be a real appetite for someone to challenge Peduto in 2021. But any chance at toppling Peduto won’t be easy. He won re-election in 2017 with 69% of the vote. Big city mayors always have critics, but Peduto has weathered several attacks over his term. A Pittsburgh mayor hasn’t lost re-election since 1933, and even that was an anomaly as the GOP-appointed Mayor John Herron occupied office right as the city’s Republican Party was falling apart.

But some local political operatives recognize that there is an opening to beat Peduto, however narrow it may be. Residents can get tired of mayors after two terms (only a handful of Pittsburgh mayors have ever won three consecutive elections), and there could be a case made for institutional change aligning left-leaning activists, more conservative Peduto critics, and neighborhood advocates, not to mention the ability to raise hundreds of thousands in campaign contributions.

But barring a huge new Peduto scandal, that will likely require a perfect candidate with a nuanced, yet digestible, and inspired message. Is anyone up to the task? 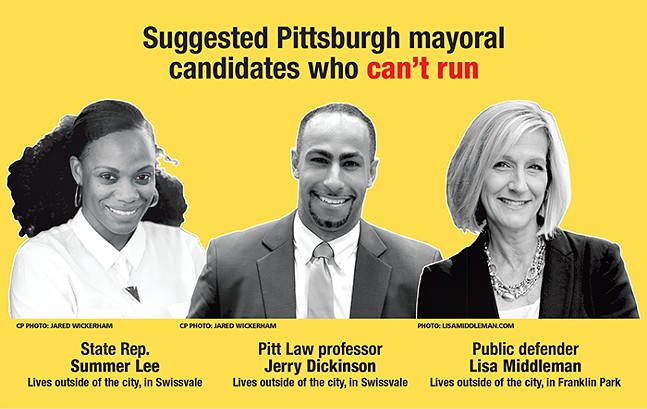 So far, there is only one candidate who has announced a challenge to Peduto in 2021.

Tony Moreno, a retired Pittsburgh Police officer who lives in Brighton Heights, announced his challenge to Peduto in September 2019. His challenge isn’t related to the recent criticism of Peduto, and he has not embraced any of the rhetoric currently lobbied against Peduto by left-leaning activists.

Outside of Moreno, no candidates have yet emerged, despite some loud cries on social media calling for challengers. Some potential challengers suggested include popular local figures on the left, like State Rep. Summer Lee, University of Pittsburgh Law professor Jerry Dickinson, and Allegheny County public defender Lisa Middleman, but none of these people live within the city of Pittsburgh, and none of them are eligible to run. According to Pittsburgh’s Home Rule Charter, mayoral candidates must be city residents for at least three years before running and remain residents throughout their term.

Pittsburgh City Paper reached out to several inviduals and activist organizations that have recently been openly critical of Peduto to see if they have heard of any possible candidates to challenge the mayor. No one named anyone seriously considering a run.

CP also spoke to some people who have worked in Democratic political campaigns in the region, since the city overwhelmingly votes Democratic and the mayorship is consistently won in the primary. They couldn't confirm any actual candidates, but speculated on people they believe could be strong challengers.

O’Connor and Strassburger both told CP they are not running for mayor and are focused on their districts. The Wagner campaign said “she isn’t answering these sorts of questions because of the importance of the upcoming [presidential] election.” Innamorato declined to comment. All others did not return requests for comment.

If a strong challenger emerged, what would it take to defeat Peduto?

Darwin Leuba has worked on local state house campaigns, and most recently Middleman’s unsuccessful independent run for Allegheny County District Attorney. He recently put out a call on Twitter for candidates who are interested in challenging the mayor. Leuba acknowledges he is not a city resident, and he won’t personally have a say in any election, but he is inviting candidates because he believes the mayor of Pittsburgh has an effect on the whole region. He thinks the time is ripe for a challenge.

“When you think of Pittsburgh, you think of bridges, the Steelers, and not liking Peduto,” says Leuba. “There is a momentum to not wanting Peduto to be mayor.”

Leuba says the best kind of candidate to challenge Peduto would be someone who thinks outside the box of city politics, and who will work to reform city government. “[They] also have to be good enough on the issues,” says Leuba. “Not just someone who can beat Peduto, but isn’t just a Peduto by another name.”

Another reason Leuba doesn’t think a more well-known name will emerge as a challenger is because many of the politicians he thinks are in a good position to take on Peduto from the left are already in good seats, and may not want to pause their political careers for a difficult mayoral challenge.

“If you are already in a good seat doing good work, why waste all that energy?” asks Leuba.

For example, another name Leuba has seen thrown around is Allegheny County Councilor Liv Bennett (D-North Side), but he says county council rules would require her to resign if she seeks a mayoral run. And as part of a small, but growing, progressive block on county council, he says Bennett would be better served remaining in her current seat.

But, any challenger with a low name ID now is going to have to spend a lot of money to build up their brand. According to the most recent campaign finance reports, Peduto has around $500,000 campaign cash on hand.

A local campaign operative who spoke to CP on the condition of anonymity says the ability to raise money and build a real base of support will be necessary.

“I think there is certainly a space if they have the appetite to do it,” says the operative. “But I think it takes a real base of support. And an ability to raise a substantial amount of money in a short amount of time. While [these candidates might] exist on paper in the minds of activists, it is easier said than done.”

“If you are a real name, you are not just gonna do it to raise your profile. You want to win.”

The operative describes the difference between some recent primary victories of left-wing challengers, like Innamorato’s 2018 victory and Bethany Hallam’s 2019 win, to what challenging Peduto would be like. The mayor is currently the most high-profile politician in the region, and he is well known. Innamorato and Hallam’s victories were against incumbents that still were largely unknown to the voters, since state representatives and county councilors are featured prominently in the media.

Another person who has worked in local political campaigns spoke to CP on the condition of anonymity. This source says a more well-known figure, like Lamb or Wagner, would have an easier time raising money and their name ID is already relatively high.

But a candidate like that is only going to enter the fold if they think they can win, and Peduto is shown to be extremely vulnerable. “If you are a real name, you are not just gonna do it to raise your profile,” says the source. “You want to win.”

The source says the recent events over the summer have created some movement to the left of Peduto, and it opens up a possibility. But any challenger is going to have to bring together a lot of competing interests. Voters in some parts of the city might want police reform, while others might want more development, or even more police presence. The source says it is possible to bring those interests together, since there is a sect of the voting population that doesn’t like Peduto, but it still won't be easy.

And the source says they can’t run on Medicare-for-all or even the Green New Deal, which Peduto has balked at supporting, because mayor races are always about hyper-local issues. This is what makes them different from state or national contests.

“It’s not like primarying a member of Congress. It is just way more direct in people’s lives. Many want the incumbent out for personal reasons, not big picture issues,” says the source, referring to finding the right challenger to beat Peduto. “If I am looking at it from that angle, I am not looking at a ton of optimism.”