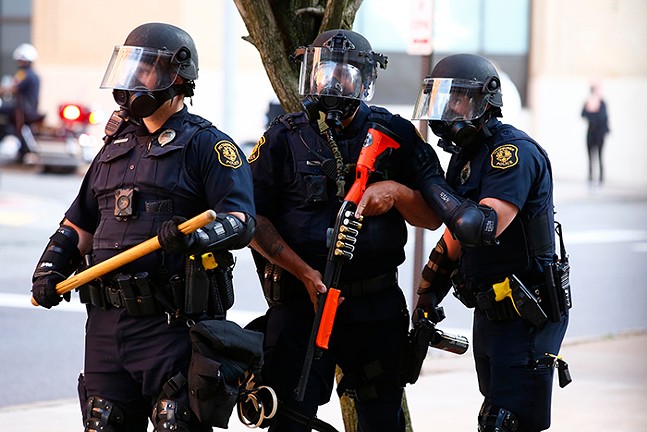 CP Photo: Jared Wickerham
George Floyd protestors clashed with police and SWAT in East Liberty on Mon., June 1.
The official Election Day is not until Nov. 3, but voting has already started in Pennsylvania, with thousands of people using mail-in ballots. Ballots include voting in the presidential election and state legislative contests, but, for city of Pittsburgh residents, there is also an important measure about whether or not to expand the power of the Pittsburgh Citizen Police Review Board (CPRB).

The CPRB is an independent agency of seven citizens that review other citizens' complaints about police misconduct among City of Pittsburgh police officers. In July, Pittsburgh City Council unanimously passed a bill to add a question to this year's general election ballot to expand the powers of the CPRB.

The question is about whether or not to amend the city's Home Rule Charter "to allow the Board to require police officers to participate in investigations, conducting performance audits of the Police Bureau and preventing the removal of Board members except for just cause and with City Council approval?"

The question was added by council in the wake of mass protests against police brutality in the wake of the killings of George Floyd and Breonna Taylor. The measure was prompted in part by multiple incidents where protesters in Pittsburgh were confronted by police officers, who used projectiles like sponge rounds and chemical munitions like tear gas or pepper spray on protesters.

As it currently stands, the CPRB can give recommendations to the Pittsburgh Police Department about certain disciplinary actions or reforms, but doesn't have any authority to enforce them. According to PublicSource, "Between 1998 and 2017, 3% of the more than 3,000 complaints CPRB received resulted in public hearings, one of the final stages of the board’s process."

According to WESA, the referendum would also prevent the Pittsburgh Police from making a final decision about a disciplinary situation until the CPRB has given its recommendations. City Councilor Ricky Burgess (D-Point Breeze), who initially introduced the referendum, told WESA that he wants an independent group outside of the police to weigh in on complaints.

“We want to make sure there is a different voice, not just the police voice, making these decisions," Burgess said.

Additionally, the question also gives Pittsburgh mayor the authority to remove CPRB board members for "just cause," but city council can override any removal with a two-thirds super-majority vote.  Finally, if the ballot question is passed, then CPRB will have the authority to conduct performance audits in conjunction with the Pittsburgh City Controller.

The question will appear on the ballot as follows:

Shall the Pittsburgh Home Rule Charter, Article Two, Executive, be amended and supplemented by amending and adding new language to Sections 229 and 230 and adding a new Section, 231, expanding the powers of the Independent Citizen Police Review Board to allow the Board to require police officers to participate in investigations, conducting performance audits of the Police Bureau and preventing the removal of Board members except for just cause and with City Council approval?