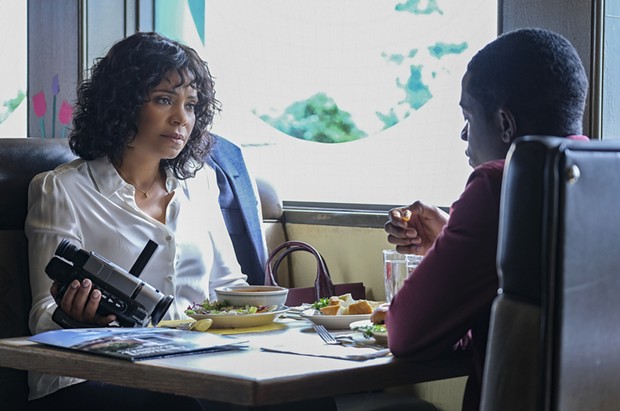 The 2019 vehicle features Jordan Peele as the narrator (and executive producer). The episodes are not available on TV or popular streaming channels like Netflix. Instead, they will be released two at a time on CBS All Access, a streaming site exclusive for CBS, which is in itself a kind of Twilight Zone. (Have you ever met a real person who pays $5.99 a month just to watch CBS?) Like the original, some of the episodes hit the mark, while others fall short. Unlike the original, they are all too long (ruining the half-hour format was a mistake).

The first episode, “The Comedian,” follows Kumail Nanjiani as a struggling stand-up comedian named Samir Wassan. His material consists of overwrought political jokes about the Second Amendment. The audience gets bored, their eyes glaze over, they look at their phones. When Samir gets encouragement to rely more on his personal life for material, he takes the advice and finds some success, but it comes with a cost. Each friend, family member, or pet he lauds onstage then disappears from his life. It offers some refreshing critique of comedians who care more about success than preserving relationships. Samir’s existential crisis — success versus his personal life — lasts a little too long, which is a running theme in this version of the show.

Two of the episodes deal with completely preventable, yet seemingly unsolvable disasters. The first, “Nightmare at 30,000 Feet,” follows journalist Justin Sanderson (Adam Scott), trapped on a plane. There he finds an MP3 player in his seat pocket loaded with a podcast about the disappearance of the very flight he is on. Justin becomes convinced he must do everything possible to save the flight, with little success. To be fair, no flight attendant is going to take action because one haggard passenger heard a weird podcast. It’s a well-done episode, combining modern fears like unsolved plane crashes, terrorism, and the futility of AirPods. Scott, as always, is well-cast in an anxious, fidgety role like this. One passenger believes Justin, noting that humans were never supposed to be this high in the sky. At its best, The Twilight Zone examines behavior humans should never have developed in the first place.

“Replay” (streaming April 12) tackles a human-made disaster of a different variety. Nina Harrison (Sanaa Lathan) is driving her son to his freshman year of college and grows increasingly desperate to protect him from police violence. When she realizes her old camcorder has the ability to rewind time, Nina uses it to erase a confrontation with a white police officer. But no matter what route they take, where they stop, how nice they are — the cop always finds them, and always accosts her son. Any mother’s worst fear is not being able to protect her kids, but “Replay” asks what there is to do when even the powers of the Twilight Zone aren’t enough. She cannot rewind far back enough to undo institutional racism, and the burden looms like a storm cloud. Unlike in “Nightmare,” Nina is able to convince her son and brother of the rewinding and repeated police confrontations, because it’s probably not hard for them to imagine.

The wildcard of the series so far is “A Traveler” (streaming April 12), set at a police station in tiny Iglaak, Alaska on Christmas Eve. Cocky Captain Pendleton (Greg Kinnear) is gearing up for his favorite Christmas party tradition, where he pardons one lucky criminal. Officer Yuka (Marika Sila) assumes it will be her recently apprehended brother, until a slick interloper in a pinstripe suit shows up, begging to be pardoned. He claims to be a travel vlogger by the name of A Traveler (Steve Yeun), but he’s clearly up to no good. The "no good" ends up involving Russia, aliens, and power grids. This episode feels more X-Files than Twilight Zone — at any moment, Yuka could dial in Mulder and Scully for help — though it is the most visually impressive, full of strange angles and shadows.

As the show’s intro states, the Twilight Zone exists “between the pit of one’s fears and the summit of one’s knowledge.” It’s not about what you know to be true about the world, but how the knowledge of consequences doesn’t always provide an easy solution.