CP Photo: Jared Murphy
Pittsburgh activist Jalina McClarin
The election in November was framed as a crossroads, and while President-elect Joe Biden came out on top on the national level, down-ballot races in Pennsylvania showed Democrats losing ground and seats. As many paced around on election night and the days to follow, local LGBTQ activists were already forging ahead with the work that needed to be done — work that existed before the election on issues that aren’t immediately solved by an election, either.

Dena Stanley, CEO and founder of TransYOUniting, has been hard at work. After a summer of marching in the streets, Stanley is currently focused on the survival of LGBTQ community members. “Right now my focus is on making sure every trans person has a place to stay and a hot meal, making sure people are not out in the cold in the middle of a pandemic,” she says. The pandemic has certainly worsened economic circumstances for many, and members of the LGBTQ community, particularly trans people of color, were already economically vulnerable. According to a 2019 UCLA study, 21.6% of LGBTQ people experience poverty, with that number reaching 30.8% for queer Black people. “Pittsburgh’s Inequality Across Gender and Race” 2019 report demonstrated that Black people living in Pittsburgh face serious health and economic disadvantages, and all of these data points are exacerbated by 2020’s pandemic recession.

So while a Biden victory will mean some wins for the LGBTQ community, such as overturning Trump’s anti-trans policies, local Pittsburgh leaders and elected officials still realize there are many goals to accomplish, and the fight for equality continues.

“When results started coming in, no matter who won, there was gonna be work that had to be done,” says Stanley. “It would be a little harder with Trump, and with Biden we can have a little more of a fighting chance, but it’s still hard.”

Pennsylvania still does not have any legislation that provides legal protection to members of the LGBTQ community. Pittsburgh and Allegheny County have passed nondiscrimination protections that protect on the grounds of gender identity and expression, as well as sexual orientation, but the surrounding counties have no protections. That means LGBTQ people are left vulnerable to evictions, housing discrimination, and a lack of public accommodations with no legal recourse if they are targeted.

“Outside of the county, you can evict trans people, you don’t have to accept them in hospitals, and it’s not against the law. You can treat a trans person any way you want. It’s unacceptable. That’s why we were in the streets [this year], to remind people of that,” says Stanley.

And organizing around trans issues benefits the whole LGBTQ community. “When you take trans women, since they are at the bottom of the barrel, when you elevate them, you elevate the whole community,” says Stanley.

A Biden victory is a relief for most, but the relief is relative, and some advocates are still skeptical. As Attorney General of California, Vice President-elect Kamala Harris defended the denial of gender-affirming surgery for Michelle Norsworthy, a trans woman imprisoned in a men’s facility. While Biden’s campaign platform did include guidance about inmates receiving gender-affirming care and being assigned by gender, local organizers are not comforted.

Allegheny County Jail has a record of housing trans women with male prisoners, and trans women of color are disproportionately criminalized and incarcerated. ACJ also tends to use solitary confinement as a way to separate trans inmates when they voice concerns, a practice many consider inhumane. The Alliance for Police Accountability in Pittsburgh is working on two ballot initiatives, one of which is to end solitary confinement at the jail.

“The elimination of solitary confinement is something that will benefit Black trans people [in ACJ],” says Jalina McClarin, a Pittsburgh activist and abolitionist. McClarin has spent this year organizing around defunding and abolishing the police, as well as working with Stop The Station, a movement against relocating a police station to East Liberty.

CP Photo: Jared Murphy
Etna borough councilor Jessica Semler
And while elimination of solitary confinement will especially help trans women of color, activists believe it will also help all incarcerated people. State Representative-Elect Jessica Benham of District 36 agrees with that sentiment, that fixing conditions for the most vulnerable translates to fixing societal problems overall. “All issues are LGBTQ issues — we are people who need housing, health care, education, paid sick leave. These all apply to the broad population and impact us too,” says Benham, who openly identifies as bisexual. “It may impact us [in the LGBTQ community] differently, but we all benefit from prioritizing things like public health and economic recovery.”

Benham ran and won as an openly queer woman, as well as the first autistic person to win a representative seat. Benham feels addressing broader societal issues gives legislators the chance to zoom in on the specific ways that vulnerable communities are impacted.

“But as someone with a disability and a queer person, I know how unwelcoming politics can be,” says Benham.

She seeks to make politics and the political process more accessible by hopping on Facebook Live to break down what’s happening in Harrisburg, explain the processes for passing legislation, and creating transparency.

“It can be confusing, and I want to help people engage with government in a way that makes sense to them. Government is supposed to be of the people, be by the people, for the people, after all,” says Benham. “It’s shameful when elected officials only engage during an election.”

TransYOUniting’s Trans Visibility Thursdays were used as a vessel of education regarding the election and trans issues.

“Demonstration culture is a way for us to educate our people and educate other folks who never experienced our people, to help people get a better understanding of what’s going on and how the system is working,” Stanley says. “A lot of folks don’t understand how the systems work. It’s a major problem. We have to be educating folks so they know their rights when it comes to voting and getting the right people in office.” 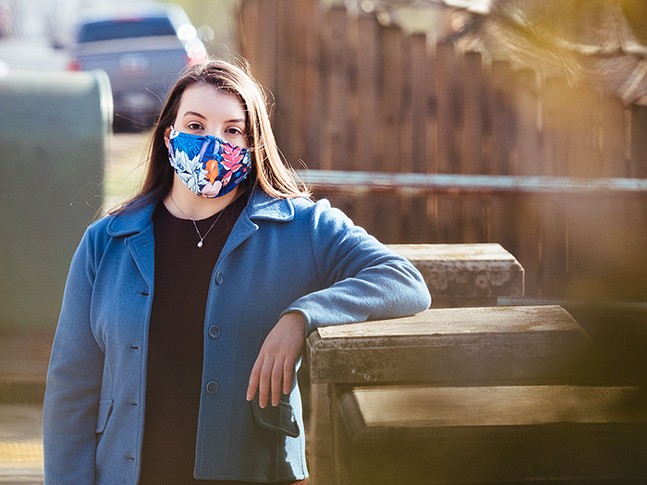 CP Photo: Jared Murphy
State Representative-Elect Jessica Benham
Unfortunately for members of the LGBTQ community, there are several politicians in office who openly do not support LGBTQ rights. State Rep.-elect Rob Mercuri (R-Pine) won his North Hills seat after transphobic mailers were sent out on his behalf by the PA Family Council, a group that openly opposes same-sex marriage and supports businesses discriminating against LGBTQ people. His opponent, candidate Emily Skopov (D-Marshall), ran ads against Mercuri and the mailers. While the district went for Biden, Mercuri won his state representative race.

“The PA Family Institute that put out that mailer is trash,” says Jessica Semler, who is openly queer and an Etna borough councilor. “While Mercuri won, I don’t think the transphobic messaging was a deciding factor. Conservatives love to demonize folks who have abortions or are LGBTQ because they don’t see these folks as whole people who have families, friends, and are part of our communities. That’s why it was great that Skopov in no uncertain terms addressed the mailer.”

Benham also believes that the transphobic attacks and Skopov’s response did not help Mercuri win, seeing as Skopov received a higher vote share than she did when she ran in 2018. “We live in a state that has a pro-Republican gerrymander [for state legislative districts], so when we have a red wave and a blue wave on historic levels, the Republican is going to win,” says Benham.

With a Republican majority in the state House and local and state conservative politicians leaning on transphobia to rile up their voter base, the passage of state-wide protections for LGBTQ people may seem unlikely. Benham, however, believes that if a bill actually made it to the floor, it would pass.

“The majority of Pennsylvanians support civil rights protections, so I think if it came to the floor, there are enough Republicans who support it and it would pass,” explains Benham. “The difficulty is getting leadership to bring pro-LGBTQ bills to the floor for a vote.”

Stanley believes that a state-wide non-discrimination bill would be very useful.

“Having a non-discrimination bill in the state of Pa., being a model state for the rest of the country — that’s really really important. Only certain counties have ordinances, and if it passed on a state-wide level, folks will know it’s against the law to discriminate, and we’re not going to tolerate it,” says Stanley. 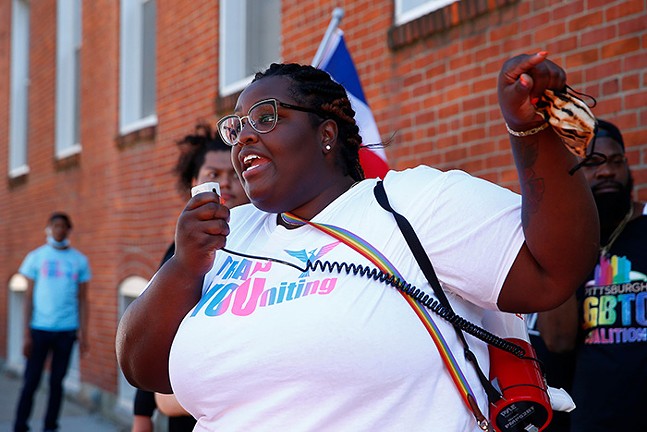 CP Photo: Jared Wickerham
Dena Stanley, CEO and founder of TransYOUniting
Some local boroughs are trying to fill the state gaps until that happens. Crafton and Etna, two suburbs of Pittsburgh, have both passed non-discrimination ordinances to protect LGBTQ residents. These ordinances protect people based on sexual orientation, gender expression, and identity. On the other hand, Sharpsburg Borough, whose council is entirely Democrats, rejected a non-discrimination ordinance 4-3 in October.

For Semler, the issue is close to home. She is a queer woman, and showing other queer people they have a place in public space is important to her.

“Without action from the state, municipalities need to step up to protect their residents. Ross Township passed a non-discrimination ordinance in 2018, and I wanted to do the same in Etna,” says Semler. “Etna passed ours, followed a week later by Crafton. I’ve heard from folks from six other municipalities so far who have asked how they might begin to start something where they are. I really hope this creates a rainbow domino effect.”

While this election season has passed for Pennsylvanians, progressive legislators and organizers stress there is still much work to do on the local and state level. Biden may be entering the White House in a few weeks, but there is still a pandemic, a recession, police and incarceration issues, and transphobia on a national level.