What is the proper way to celebrate? 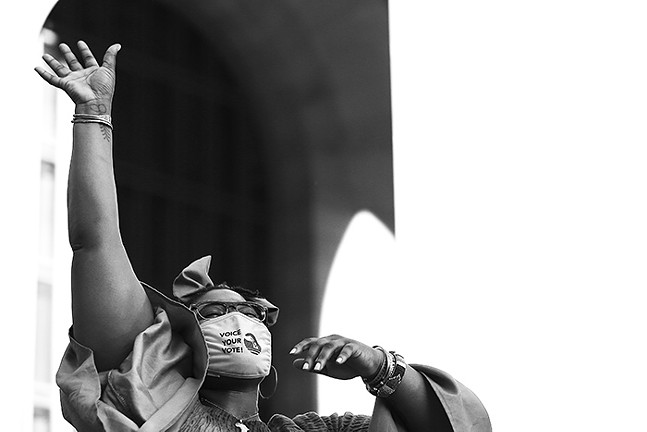 CP Photo: Jared Wickerham
A scene from Downtown’s City-County Building as Pittsburgh celebrates President-elect Joe Biden and Vice President-elect Kamala Harris on Sat., Nov. 7.
While drinking a glass of red wine on Wed., Nov. 4, my overseas love and I had this text exchange:

I sent this exchange to a few people who seemed only partly relieved, since we are not pollsters or experts, just observers; a columnist and her boyfriend are not a definitive source, and it was not enough to calm their concerns. But it was enough for me to take the thought in my head, place it in my pocket, keeping it certain, safe, secure, and easy to find when I needed it again.

And I did. Several times over the next three days. Was it only three days? The wait was not the issue for me—it was clear that Pennsylvania numbers wouldn’t be available until Friday at the very earliest. But observing it, I watched quizzically as people seemed surprised by the wait, as we were warned. I wasn’t sure if because of the isolation, this felt like the only national event we were all experiencing together. I wasn’t sure if it was the closeness of the vote tallies, the high stakes, or just because so many “wanted the nightmare to be over.”

And is it? How to celebrate the defeat of one of the worst presidents in United States history? A history filled with bad presidents. And maybe even the very notion of POTUS is problematic in a country with so many problems.

My celebration on Sat., Nov. 7 included pouring the last of that red wine and giving a quiet toast in the air. My first thought was of my dad who, instead of watching sports, has spent his evenings these past months watching cable news hour after hour after hour, and I hoped he was happier at the moment when it was announced that Joe Biden was president-elect and Kamala Harris was vice president-elect.

Secondly, I thought of a nephew who had cried so much on Election Day 2016 when 45 won and how angered I was by his sadness and fear — especially as a child, especially as a Black child in America. I was happy that today he would be smiling at least. For this and the fact that he hit his first ever out-of-the-park homerun on the day that Pennsylvania took Biden “over the top.”

Black Pittsburgh and Black Philadelphia along with other “Chocolate Cities,” or at least Chocolate corners of America, won Biden the White House. And yet I saw white politician after white politician interviewed in national media to talk about Pennsylvania.

Thirdly, I watched on my Twitter timeline images of joy and celebration in Pittsburgh. The most shared video was of the corner of Forbes and Murray Avenues. People were literally dancing in the streets. How can that not make you happy? Then I wondered if a similar scene was happening at Freedom Corner in the Hill District or Frankstown Boulevard.

And I paused here, glass just touching the tip of my lower lip, and I thought of the hypocrisy even in celebration.

Black Pittsburgh and Black Philadelphia along with other “Chocolate Cities,” or, at least, Chocolate corners of America, won Biden the White House. And yet I saw white politician after white politician interviewed in national media to talk about Pennsylvania.

And yet, before the votes had been counted, many white men and women, self-identified allies, progressives, and other self-proclaimed titles were spending a lot of energy criticizing Black Lives Matter, abolition movements, and other intersectional transformative justice movements that would, that could actually work to give Black and Brown folks equity and justice in this country.

These folks saved a special amount of words on criticizing Black women, the women again who voted overwhelmingly for the Biden-Harris ticket. Pro-Black and anti-racist posters, signs, and screen savers do not translate to policy or votes.

I drank my celebratory wine with joy, not critiquing any way someone wanted to or did not celebrate. The last sip in the glass reminded me that we have so far to go.