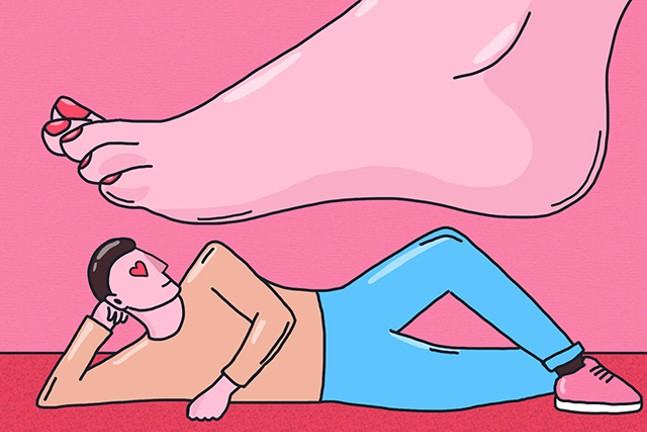 “[VR] is the perfect medium for giantess fantasies," she says. "Everything is animated in 3D and because it is so immersive, the viewer really does get the feeling that [they are] small and the giantess is very big.”

VR technology, however, is not necessary in order to create the giantess illusion. Phone sex operator and adult model Sammy Rei Schwarz says that it is all about perspective.

“I place the camera at a very low or close perspective, making myself seem as massive or as tall as I want. It is amazing what can be done just by playing around with camera angles.” She adds, “It can also be fun to take shots of myself holding a small figure to represent the man.”

In perhaps the lowest-fi iteration of this fantasy, aural smut recording artist Muse uses hypnosis to make her customers feel as if they are small. She started her career as a clinician using hypnosis to help folks quit smoking, but realized that there were more lucrative and creative uses for her skills. “I can make men feel as tiny as I want them to,” she says.

Muse’s hypnosis customers often request that she use their small bodies in very specific ways, like the time someone asked her to use him as a toothbrush. She says, “I had to ask him if he wanted to be held like a toothbrush or if he wanted to walk around in my mouth.”