What happened to plans for a "blue lagoon" on Pittsburgh’s North Side? 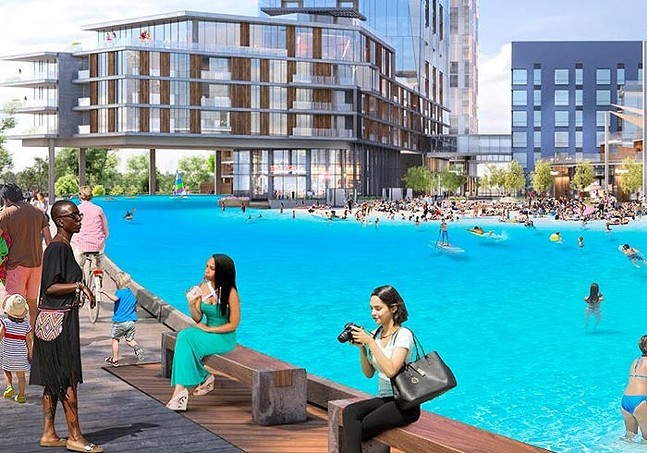 Image: courtesy of Millcraft
Renderings of lagoon proposal from 2018, which were not included in the most recent Millcraft development plans for Pittsburgh's Chateau neighborhood
Last week, Pittsburgh’s Urban Redevelopment Authority approved a large development in the Chateau section of the city’s North Side that would transform six acres of industrial property into a mixed-use Esplanade that calls for a mix of market-rate and affordable housing, commercial space, a marina, and even a Ferris wheel.

This big development is being managed by Millcraft and it have garnered a lot of attention. This has actually been the case for years, when it arguably made a bigger splash, as the development firm dropped plans for the Esplanade project to include a large, blue lagoon complete with a beach in the summer, and ice skating with thermal baths in the winter.


THIS IS INCREDIBLE! Check out what is coming to #Pittsburgh's North Side. A blue lagoon with a beach in the summer & ice skating with thermal baths in the winter. Not to mention a giant Ferris wheel you can ride in all year long!


However, the plans recently approved by the URA didn’t have any mention of a lagoon. And while the rendered drawings of what is likely to come to Chateau do look transformational for the North Side, the drawings showed no “breathtaking blue lagoon,” as it had been described by local media in the past.

So what happened to the lagoon?

Millcraft spokesperson Molly Onufer explained in a statement the plans changed to “redesign the area into an inclusive pavilion and green space to connect the site to the riverfront.” She wrote that this decision largely had to do with land and size requirements of the development, and some issues in getting permission from a private railroad, which still retains some rights to that section of the Three Rivers Heritage Trail.

“The railroad retains some rights to the Three Rivers Heritage Trail that traverses our property and we were unable to get permission to relocate the land rights or to build anything permanent there,” wrote Onufer. “The rest of space couldn’t accommodate the minimum size requirement for the Crystal Lagoon, so our improved plan includes a centerpiece destination that will be the heart of the Esplanade project.” 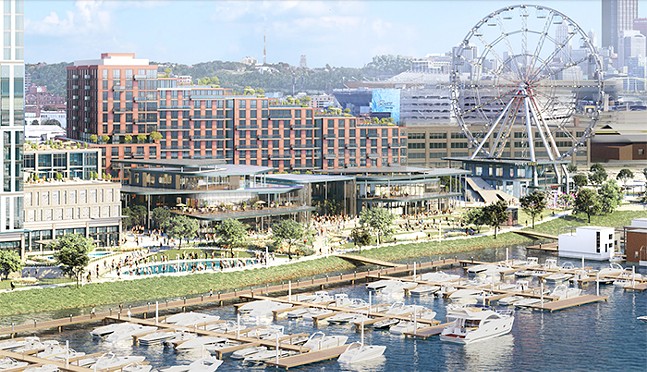 Image: courtesy of Millcraft
Rendering of Millcraft's pavilion green space plan as part of its proposed Esplanade development for Chateau. The proposal still includes plans for a Ferris wheel
Private railroad companies retain many land-use and right-of-way rights along many corridors in Allegheny County, especially along the rivers. The city owns the Three Rivers Heritage trail and the section that runs north through Chateau. However, a map from the Pennsylvania Department of Transportation indicates that section of trail does include a railroad right of way. Onufer says that CSX was the railroad that operated along the trail before the tracks became the part of a Rails to Trails program.

Getting permission from private rail companies for development isn’t always easy. A proposed trail from Millvale to Apsinwall has hit delays because of negotiations between the municipalities and the railroad. Railroads can be wary of liability issues for development near or along their right of ways. 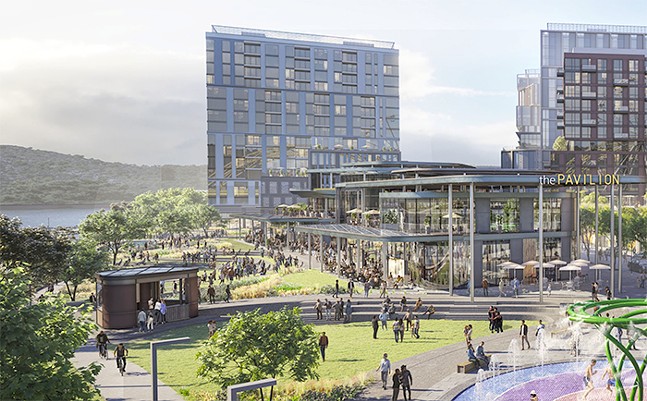 Image: courtesy of Millcraft
Rendering of Millcraft's pavilion green space plan as part of its proposed Esplanade development for Chateau
It's also not uncommon for large developments to alter their plans, even in the late stages. And Pittsburgh, like many cities, is full of ambitious proposals that fail to materialize. Throughout the last several decades, many large projects that have failed to be completed include: SkyBus transit system, MagLev high-speed rail, a stadium built on a massive bridge over the rivers, and more recently, hyperloop.

But even without the lagoon, Millcraft says the Esplanade will still be offering a large and welcoming public space called “The Pavilion,” which will include operable windows and a roof structure that will allow of convertible indoor and outdoor space. The lagoon plan is out, but Onufer notes that the updated plan should have more amenities than previously proposed, including a “four-season rooftop pool.” She says that will include a climbing wall, public art, a food emporium for merchants, a brew-pub, an indoor/outdoor public park, a food and beverage event venue, sustainable features like solar panels on the roof and façade.

“It will serve as a bridge between the family-oriented side of the site, the retail, the riverfront, and the enhanced public trail with even more amenities than our previous plan,” wrote Onufer. “The new plan includes something for everyone for all times of the year (and all kinds of Pittsburgh weather).”