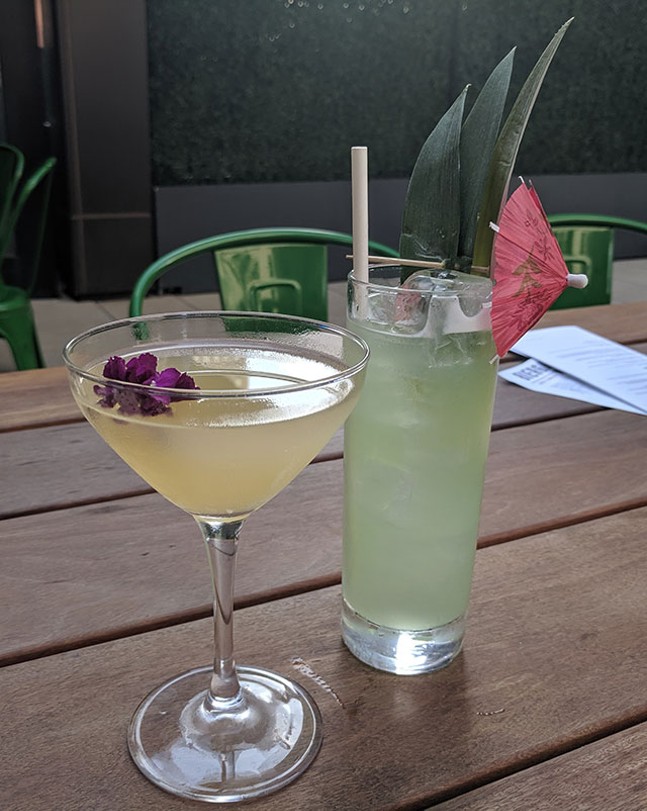 CP photo: Maggie Weaver
The Mai Tai-ger Woods is Back and Lime in the Coconut.

"Duck fat-washed bourbon" is not an appetizing term. I cringed the first time I heard it, imagining an industrial sized blender full of duck fat and bourbon served smoothie-style. In reality, this is far from what's involved in the world of fat-washed spirits.

The fat-washing process adds flavor to a spirit akin to an infusion (but with a little more science involved). Anything can be used to wash a spirit, from animal fats and nut oil to an entire grilled cheese. Combine the two for a multi-day infusion, which leaves behind a fully-flavored, almost entirely new spirit behind. (If a two-to-three day wait seems impossible, a freezer speeds the process up.)

Aside from flavor, fat-washed spirits have other unique characteristics. Alcohol binds to fat, which takes away the harsher elements of, for example, a rye whiskey. Washing adds a barely detectable texture, giving spirits a subtle thickness.

Alex Dando, lead bartender at The Commoner Downtown, has peppered fat-washed spirits throughout the bar menu. His cocktail list is full of strange combinations like cake batter-washed Campari and peanut butter-washed bourbon.

Many of his cocktails are based on classics. Dando takes a Mai Tai and turns it into the “Mai Tai-Ger Woods is Back,” a drink using almond washed wray (an over-proofed rum), for a smooth kick. Or he’ll wash a rum with coconut oil for a “Malibu you can feel good about.”

Duck fat comes into play around Thanksgiving in Dando’s Turducken cocktail. He washes Wild Turkey bourbon with the duck fat for a sweet smokiness. The batched cocktail, made with apple brandy, apple cider, maple syrup, and lemon, is then milk washed. Milk washing is a pre-refrigeration technique, similar to fat-washing, using a high citrus punch and boiling milk to clarify the starting batch. The finished product is a clear, non-perishable drink, with no bourbon burn.

At the hotel’s seasonal rooftop bar, Dando washes Grey Goose in coconut fat and pairs it with sake, pineapple, vanilla, and coconut-berry Red Bull to make the “Lime in the Coconut.” Despite its long list of ingredients and tricky methods, the cocktail tastes simple. There’s no burn from the vodka and the coconut hits on the finish of each sip.

Every now-and-then, Dando says, a guest has a “what the f***” moment over his out-of-the-box concoctions. He calls fat-washing a “gateway drug” out of comfort zones and into inventive, exciting cocktails.  An avocado oil-washed gin might sound crazy, but trust your bartender. They know what they’re doing.