What does the medical-cannabis community think of Pennsylvania’s new push for recreational marijuana? 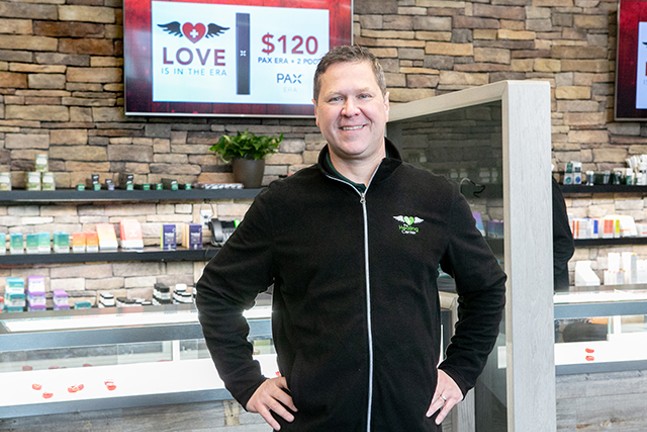 Pennsylvania got its first medical marijuana facility about one year ago. Since then, the patient lists have grown, and with the exception of some minor hiccups with oversupply, the dispensaries have rolled out with relative ease.

State Rep. Jake Wheatley (D-Hill District) introduced recreational marijuana to the state legislature in February. “For too long we have allowed myths and ignorance to prevent a realistic and thoughtful discussion regarding the legalization of adult-use cannabis,” Wheatley said at a press conference, as reported by Philly Voice. “In 2016, we passed a law allowing medical cannabis in Pennsylvania. That law was the right step, the first step, but we need to do more."

But what do the people who grow, facilitate, and provide Pennsylvania's medical marijuana think? Are they ready for a push for legal Kush? Pittsburgh City Paper spoke to two Pennsylvania dispensary operators, and their feelings ranged from optimistic to apprehensive. And it might take more than popular opinion to bring all about the new recreational-marijuana train.

Grassroots spokesperson Mahja Sulemanjee says the company is in support of Pennsylvania’s push for recreational marijuana. She gives kudos to Wheatley’s bill, which on top of legalizing cannabis for adults over 21, would also expunge criminal records and exonerate people incarcerated for marijuana offenses, as well as siphon funds to boost affordable housing and relieve student debt.

“What they are proposing in the bill is really phenomenal,” says Sulemanjee. “It is a win for a lot of people.”

She says Grassroots' experience with both medical and recreational markets has shown that there is little difference between the two. Sulemanjee says the biggest difference is the scope of customers.

“I don’t think there will be much change on our part,” says Sulemanjee of recreational marijuana being legalized in Pennsylvania. “We will just see a lot more folks coming in. From a dispensary side, it is really all about the scale.”

Sulemanjee isn’t sure how quickly legal marijuana will become realized, but she commends the transparency of the push so far.

“I think comparably, the lieutenant governor's listening tour is going to mean a lot to make this bill,” says Sulemanjee. “I haven't seen any other state take that approach. It’s really a feather in the cap.”

Chris Kohan of The Healing Center also commends Fetterman for the listening tour. He says the state still has a lot to learn about marijuana. Kohan said during the push for medical marijuana, he once had a state senator ask him, “Will a child use a bong?”

He is in support of recreational marijuana in Pennsylvania, in theory, but Kohan lacks confidence the state legislature will move a bill anytime soon.

He reminds people that Pennsylvania's medical marijuana bill had many roadblocks. For years, the bill was held because House Speaker Mike Turzai (R-Marshall) would continually place the bill in a committee with a chair who was vocally anti-marijuana. Only after former state House majority leader Dave Reed (R-Indiana) forced the bill out of that committee did the bill see progress.

“Nothing gets called for a vote in this state unless there are four Republicans that say yes,” says Kohan.

Kohan says his medical dispensary business has run smoothly and successfully so far. The Healing Center, which has dispensaries in Monroeville and Washington, Pa., with a Cranberry location under construction, has served 7,000 patients since late June 2018, according to Kohan.

“Over 80 percent of patients respond very positively,” says Kohan. "The positive vibe is really something. It’s better than I expected.”

Because the medical rollout was successful, and considering the control that anti-marijuana Republicans have in the state legislature, Kohan is more in favor of expanding the medical market.

He thinks more conditions, like anxiety and depression, can be added to the medical marijuana law as a way to reach more patients.

“I truly believe the Republican contingency is for the expansion of the medical market,” says Kohan. “Pennsylvania largely did a phenomenal job with implementing medical marijuana. We have a lot of patients already in this program. We have had a lot of movement.”