What can be done to expand public transit to underserved communities? | News | Pittsburgh | Pittsburgh City Paper

What can be done to expand public transit to underserved communities?

“I hope we can get expansion; I think that is something we need to work for.” 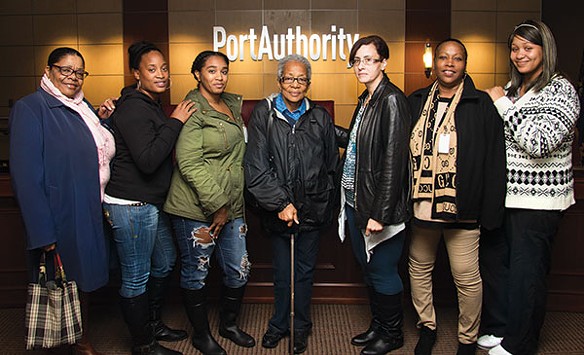 On Oct. 28, a group of passionate West Mifflin residents went before the Port Authority of Allegheny County board to plead for bus service. The group lives in Mifflin Estates apartments, which consist of many Section 8 units and are a mile walk down a sidewalk-less road to the nearest bus stop.

“Public transport is something everyone needs,” said Mifflin Estates resident Starr Magwood at the meeting. “We are stuck on this island and we don’t want to be stuck.”

Over the past few years, many groups from throughout Allegheny County have spoken at Port Authority board meetings to request bus service, at times filling the boardroom to capacity. In response, Port Authority set up an online, mail-in and call-in request system, and the results have been overwhelming.

From mid-September through November 2015, more than 1,550 requests and 85 unique ideas were received for service additions for the next fiscal year. Port Authority even instituted an equity-score system that weighs populations of seniors, low-income residents, minorities, and persons with disabilities together in an attempt to make the fairest decisions.

In 2011, Port Authority made drastic cuts due to insufficient funds; service was reduced by 15 percent, and about 30 bus routes disappeared. Act 89, the state’s comprehensive transportation-funding bill, passed in 2013, and the authority has since begun to restore service, but at a trickle.

“We are going to have a large list of requests and only limited money, relatively speaking, to enhance service,” says Port Authority spokesperson Jim Ritchie. “We are trying to do the best we can with what we have, but unfortunately we just don’t have enough to tackle all the transit issues in Allegheny County.”

This year, almost $600,000 was spent to increase service to Garfield and western Penn Hills. But many other requests weren’t addressed. With growing demand and limited dedicated funding, how can the region increase its bus service? There are options, and each comes with its own plusses and minuses.

By 2019, Act 89 will have contributed almost $500 million to public transportation. While this seems like a lot, it’s actually not enough to significantly expand Port Authority, or any transit system in Pennsylvania.

“The funding of Act 89 lets us take care of the status quo, but how do we take its momentum and expand?” says Carly Dobbins-Bucklad of business coalition Allegheny Conference on Community Development, which is analyzing strategies to increase public transportation in the Pittsburgh region.

Since Act 89 passed, no attempts have been made in the state assembly to increase funding for public transportation. Allegheny County Executive Rich Fitzgerald says the promise of economic development could be used to encourage state legislators to increase funds, but won’t be easy.

“I hope we can get expansion; I think that is something we need to work for,” says Fitzgerald. “But I think we are going to need more political will or political pressure to incentivize the legislature.”

Fitzgerald points to future development of the Almono site in Hazelwood as a possible source of economic growth that will need more transportation options. On Oct. 27, the Almono site announced Pittsburgh’s first planned and designed Complete Street that emphasizes alternate transit options like public transportation, biking and walking.

But Molly Nichols, of the advocacy group Pittsburghers for Public Transportation, says Act 89 barely passed in the first place. She is skeptical of state legislators becoming public-transit champions.

“Getting Act 89 through was down to the wire,” says Nichols. “We passed Act 89 by the skin of our teeth. Getting a bill through to increase public-transportation service any time soon seems very [unlikely].”

However, according to a press release, Fitzgerald has been “extremely proud” of balancing Allegheny County’s budget without raising taxes for five years in a row. A push to raise taxes for transportation would mostly likely have to come directly from residents, and Dobbins-Bucklad says that happens only when there’s a tangible project for them to latch onto.

“You have to know why you need that money,” says Dobbins-Bucklad. “It would need to be more tangible than [increasing bus service].” (For example, Los Angeles’ sales-tax increase offered a “Subway to the Sea” rail extension.)

Another option is for Port Authority to partner with private companies to provide service that’s too difficult or expensive for the authority to run. “You don’t just think of transit as a 40-foot bus,” says Dobbins-Bucklad. “There are opportunities here that could help us extend the reach of public transportation.”

The Allegheny Conference has been researching transit across the country, and Dobbins-Bucklad says trends are going toward shared mobility. For example, Boston-based technological transit-related company Bridj recently launched a shuttle service with the Kansas City Area Transportation Authority.

Bridj’s software creates routes based on all the riders in a given area and then sets pick-up locations nearby, though not always at a user’s exact location. Shuttles then take riders to bus stops. (Pinellas County in Florida is doing something similar with Uber, Lyft and local taxis.) The rides are partially government subsidized and prices remain the same or similar to riding the bus.

Dobbins-Bucklad says this can serve low-income riders who don’t currently have adequate bus service, and is also growing in popularity with car-owners who would prefer to take public transit.

However, Nichols, of Pittsburghers for Public Transportation, points out that public-private partnerships also mean giving public money to private companies that don’t always look out for their workers. Nichols would rather see Port Authority expand because being a bus driver is a “family-sustaining” job that low-income residents have access to.

To build out Port Authority’s current system without affecting low-income families, Nichols’ group believes the county should tax corporations. The group submitted a white paper this March requesting a county tax on corporate profits to increase funds for public transit. PPT cites the nation’s growing corporate profits and shrinking corporate-tax revenue over the years as reasons corporations should contribute.

“Major corporations and institutions in our region couldn’t function without our public-transportation system,” says Nichols. “Some of their profits should pay into that system.”

There’s also a way to avoid both raising taxes on anyone and making structural changes through public-private partnerships: philanthropy. Act 89 allows public-transportation agencies in Pennsylvania to accept funds directly from businesses. (For example, the micro-transit agency Ride ACTA, in Robinson Township, gets some money from FedEx.) So what’s stopping UPMC or Giant Eagle from providing funds directly to Port Authority? Nothing, but there’s a catch.

“In theory, the Authority could accept a payment from a private entity to provide transit service,” wrote Ritchie in an email to City Paper last year. “However, the service would have to be on a fixed route, open to the public and would require our standard fare. Otherwise, it would be considered an improper charter service.”

Regardless of what route the Pittsburgh region takes, there are scenarios that are brighter for public transportation’s future. For instance, both major-party presidential candidates, Hillary Clinton and Donald Trump, support increasing public transit. (Clinton’s support might be more legitimate, considering that Trump’s tax-cutting plans seem to undercut his verbal support.) But just like everything else in the U.S. right now, a lot depends on what happens Nov. 8.