Whales: Tohora tells of whales -- and how New Zealand's people have viewed them over time. | Features | Pittsburgh | Pittsburgh City Paper

Whales: Tohora tells of whales -- and how New Zealand's people have viewed them over time. 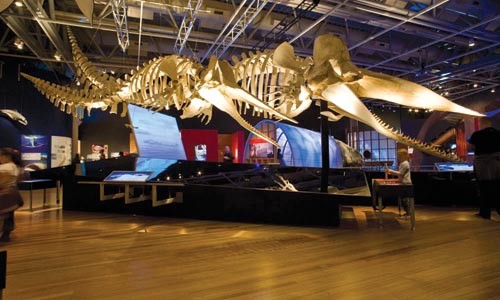 Fin du monde: Two sperm-whale skeletons dominate Whales: Tohora. (These specimens, though photographed at another museum, are identical to the version at the Carnegie.)

Everyone knows whales are big. But unless you see one up close, it's hard to get a sense of just how big. And "Zoos don't tend to keep whales," says John Wible, curator of mammals for the Carnegie Museum of Natural History.

Thus, the huge, complete sperm-whale skeleton that greets visitors to the museum's Whales: Tohora exhibit. That is how big they are. Whoa.

The exhibit also allows you to climb into a life-sized model of a blue whale's heart -- don't be shy, it's not just for kids. Inside, you can hear the thrumming beat. In a small booth by the heart, dial up the calls of several different species and hear -- or, in some cases, feel -- the animals' songs (which they use for navigation and hunting). Sniff a lump of ambergris, the grey intestinal secretion of sperm whales. Traditionally prized as a perfume fixative, the ugly stuff has a faintly sweet, earthy smell.

The traveling exhibit, which originated at Te Papa, the national museum of New Zealand, provides a great look at the physiology of whales. But what makes it especially intriguing is how it explores the relationship between whales and people. The focus is on the indigenous Maori -- some of whose oral traditions hold that the first human to inhabit New Zealand arrived on the back of a whale.

The exhibit includes an excellent collection of Maori whale artifacts, with text explaining their significance -- like hei tiki, human figures carved from whale bones that denote power and influence. Ornamental combs are sacred artifacts -- their closeness to the head and hair imbues them with extra significance. And carved whale teeth, considered to be of incalculable value, were exchanged at momentous occasions like births and deaths, and to emphasize the sincerity of apologies.

The text that accompanies such items was written by coastal Maori tribespeople themselves. This is crucial, says David Watters, who curates the Carnegie's anthropology department: Too often, such museum text is written by anthropologists, who view the artifacts through their own cultural lenses. (Watters emphasizes that the exhibit represents only coastal Maori, who make up just one portion of Maori culture.)

Though whales sometimes beach when they are old or ill, beaching remains a mysterious phenomenon. Moreover, unlike some indigenous coastal cultures, Maori did not traditionally hunt whales. Artwork in the exhibit shows Maori making use of beached whales gratefully, harvesting as much from the animal as possible. "A beached whale in the past would have been an extraordinary resource," Watters says. New Zealand has very few large animals, and the rare beached whale was a valuable source of meat, ivory and bone. "These people had a close association with nature -- it doesn't preclude using all the natural resources."

That's changed somewhat. "Today, the idea is, 'Let's put it back in the ocean,'" Watters says. "There's a certain amount of Western perspective."

Only recently have Maori and Europeans alike done an about-face and become devoted to preserving whale populations. One exhibit video features a man whose family came to New Zealand from Italy for whaling. He talks about how much he loved whaling: being out on the sea, the adventure, the camaraderie. Now he enjoys the same benefits -- as a conservationist.