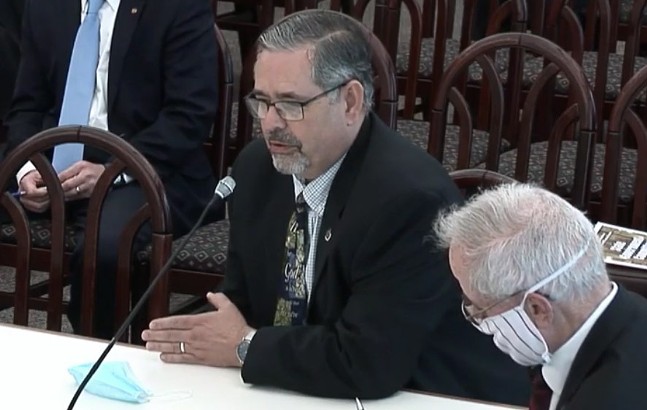 Screenshot taken from You Tube
Cris Dush
Today, during a state House committee meeting, state Rep. Cris Dush (R-Jefferson) criticized the transparency of Gov. Tom Wolf’s plan to re-open Pennsylvania during the coronavirus pandemic. While many Republicans have criticized Wolf over his plan, Dush took it a step further and said the governor has “refused all sorts of information” and compared that to the governments of Nazi Germany and the former U.S.S.R.

“More and more I go back to the German Democratic Nationalist Socialist Party, the Nazi party. I go to the Union of Soviet Socialist Republics, the USSR,” Dush said. “This is a socialist playbook.”
Dush represents state House District 66, which stretches from Jefferson County south to parts of Indiana County. During the meeting, his comments were met instantly with condemnation from state Rep. Kevin Boyle (D-Philadelphia), the ranking Democrat on the committee.

“Chairman, this is outrageous,” said Boyle. “Stop it with these Nazi references. It’s offensive and wrong. Stop it.”

According to PennLive, some of the governor’s offices are not processing Right-to-Know requests, but Wolf’s office has refuted claims they are withholding information.

Conservative legislators have also criticized Wolf for not revealing enough information about the decision-making process of the business waiver program for coronavirus closures. State Auditor General Eugene DePasquale (D-York) is performing an audit of the waiver program.

Regardless, the Wolf administration condemned the comparison to Nazis. “In the last few days, House Republicans have shared fake reopening plans online and a rank and file member has compared the Administration to Nazis while Republican members have spent time moving legislation to reopen zoos during a global pandemic and rallied with activists who have made threats against the governor,” a spokesperson for Wolf told the Philadelphia Inquirer.

State Rep. Dan Frankel (D-Squirrel Hill), who is Jewish, also denounced the comparison made by Dush.

“I was horrified to learn today that my colleague drew a comparison in a committee meeting between the Nazi Party and Gov. Wolf’s efforts to slow the spread of the deadly COVID-19 pandemic,” said Frankel in a statement. “The Nazi Party and its leaders systematically murdered more than 6 million Jews and many others in an attempt to create a dominate race. Any effort to muddy that history dishonors all of the innocent lives lost, and it frankly feeds the ugly resurgence of hate-based groups that are actively using COVID-19 to foment their message of intolerance throughout the country.”