In a quasi-legendary interview he gave to Frank Rich in 2000 on the occasion of his 70th birthday, Stephen Sondheim lamented the evolution of the American Musical from the silly, fluffy shows of the '40s and earlier into Important Musical Theater -- a process which he himself helped facilitate.

He remembered that at the second night of West Side Story, he stood in the back beaming with pride (he wrote the lyrics) until a man stood up and brushed passed him on the way out the door. Sondheim said he immediately knew why: The guy, who wanted nothing more than a simple musical entertainment, "instead got a lot of ballet dancers in color-coordinated sneakers snapping their fingers and pretending to be tough."

By some measures, the American Musical reached a zenith with West Side Story -- a reconfiguring of Romeo and Juliet, conceived by Jerome Robbins, with music by Leonard Bernstein, lyrics by Sondheim and book by Arthur Laurents. But ironically, that pinnacle (in 1957) also marked the beginning of the musical's irrevocable divorce by the cultural zeitgeist. Robbins' choreography is wonderful, Bernstein's score majestic and Sondheim's lyrics impeccable ... and at no point do you ever feel like you're watching even the smallest moment of reality. West Side Story isn't about whites and Puerto Ricans fighting turf wars; it isn't about young love or doomed love or the death of innocence. West Side Story is a musical about what happens when three geniuses write a musical.

West Side Story is all about brilliant moments of theater -- not life, but theater. It is ballet dancers in color-coordinated sneakers executing amazing dance steps to a soaring score ... and if they didn't, you wouldn't ever get to see that famous crouching-hop move recreated in a Gap ad. It's not important that you buy Tony and Maria falling in love at first sight. They do so because if they didn't, then the song "Tonight" would never have been written. It's artificial, sure ... that's the whole point.

The only area where this artifice becomes a problem is in Arthur Laurents' script. Lines like "You better dig this and dig it the most" must have sounded like a middle-aged man writing for teen-agers back in 1957; believe me, that line (and many, many more just like it) hasn't gotten any fresher.

But not to worry. Following the enormous critical success of his direction of the latest Gypsy revival on Broadway, Laurents (at age 90!) is about to direct a West Side revival for Broadway this coming season. Maybe he'll address the stale lingo and the watered-down cursing (necessitated by the times) of his hoodlums.

Laurents also needs to cast Max von Essen in the lead. He's playing Tony in this new Pittsburgh CLO production and he is, without question, the strongest Tony I've ever seen: a thrilling voice and the ability to make Tony's unearned, enthusiastic optimism believable. Ali Ewoldt simply could not be more adorable as Maria. And as Anita, Riff and Bernardo, Manoly Farrell, Spencer Howard and Wilson Mendieta provide powerhouse support.

Mark Esposito recreates Robbins' choreography, and it's a credit to him and this outstanding cast that the dancing is as smooth and as tight as it is. Van Kaplan directs with a strong hand, and musical director Tom Helm and the orchestra bring a great deal of color and life to Bernstein's classic score.

You better dig it, daddy-o. 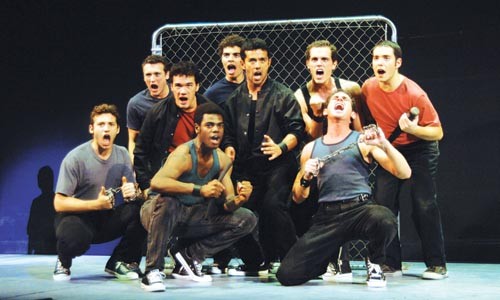 Photo courtesy of Matt Polk.
The gang's all here: Sharks sing it out in Pittsburgh CLO's West Side Story.